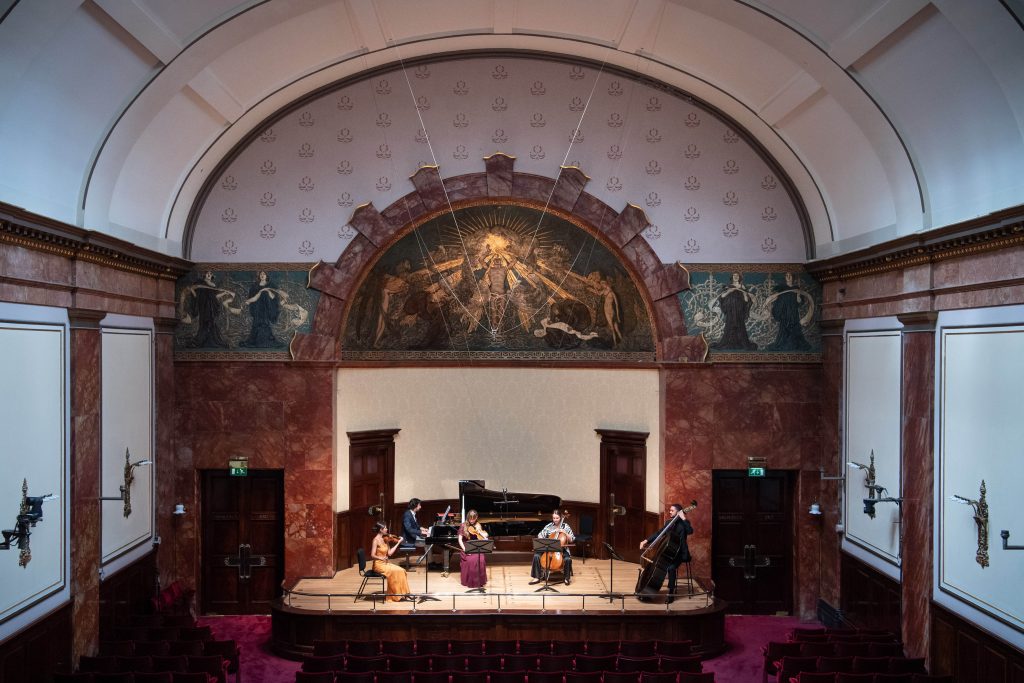 In response to the British government’s announcement that indoor performances with socially distanced audiences will be possible from 1st August, Wigmore Hall Director John Gilhooly will unveil ambitious plans for the autumn season at a one-off re-opening concert on 1st August.

In front of invited guests at Wigmore Hall’s first concert with live audiences since UK’s nation-wide lockdown, Gilhooly will announce details of a seven-week-long series of 80 concerts that will take place every day from 13th September to 1st November. Each concert will be approximately 60–90 minutes in length with no interval. At least 60 of the concerts will be open to live audiences as the auditorium capacity is reduced to 56 (10% of full capacity). All 80 concerts will be lived streamed on high-definition video on Wigmore Hall’s website.

Following on from the success of the live broadcast concerts in partnership with BBC Radio 3 in June, the autumn series will not only include solo recitals and duos, but trios, quartets and larger ensembles will also return to Wigmore Hall for the first time since lockdown. Many of the 150 musicians scheduled to perform will travel to London from across Europe, marking the return of international musician to the Wigmore Hall stage since travel restrictions were lifted. The series opens on 13 September with a song recital by the Olivier Award winning German baritone Christian Gerhaher and the pianist Gerold Huber.

Wigmore Hall will undertake a series of measures to comply with the government’s latest health and safety guidelines to provide audiences with the safest and the most comfortable environment to enjoy music. They will include:

“The health and safety of our audiences, musicians, and staff will always be our foremost concern.  After the overwhelming responses to our June broadcast series that touched minds and hearts around the world, I am thrilled to be welcoming audiences through the doors to our beautiful auditorium again.” “Over the past few months many of the world’s most distinguished musicians have not been immune to have their entire performance diaries wiped out and therefore without income.  Wigmore Hall is pleased to be able to play a role in supporting musicians financially by providing them with a stage to perform in front of audiences in London. “Should the international crisis escalate again before September, our planned autumn concerts will revert to empty hall broadcasts.  We will continue to follow and respond closely to the government’s guidelines and recommendations in formulating our plans beyond November, into the challenging winter months.”

The roster of musicians taking part in the autumn series will include Kaleidoscope Chamber Collective and Apartment House – who become Wigmore Hall’s two new Associate Ensembles. Kaleidoscope Chamber Collective, under the direction of pianist Tom Poster, brings together some of the finest young instrumentalists in new and varied formations, with a specific commitment to celebrating diversity. Winner of a Royal Philharmonic Society Award, Apartment House, formed by the cellist Anton Lukoszevieze, is one of UK’s leading specialists in avant-garde and experimental music.

Confirmed line-up of musicians so far include:

Detailed programme, schedule as well as seat availability will be announced on 18 August.

Pianist Tom Poster and violinist Elena Urioste, on behalf of the Kaleidoscope Chamber Collective who will perform at Wigmore Hall on 1 August, said: “Kaleidoscope’s last concerts to live audiences took place at Wigmore Hall in February. We had no idea that only a few weeks later, the whole world would come crashing to a halt. John Gilhooly’s series of concerts in June – live-streamed and broadcast far and wide – shone a ray of hope. Despite the proliferation of online performances during lockdown, nothing will ever replace live music-making, with its indefinable alchemy between composer, performer and audience, all resonating together in a magical space.”

This series is underwritten by a private donation from Louise Kaye in memory of David Kaye.

About Wigmore Hall
Wigmore Hall is one of the world’s great concert halls and specialises in chamber and instrumental music, early music and song. Discreetly nestled in central London, Wigmore Hall is an intimate space famous for its crystalline acoustics and its concerts are known for their extraordinary quality and sense of artistic adventure. The Hall first opened its doors in 1901 and has provided a platform for great performers and composers ever since. John Gilhooly has been the Hall’s Artistic and Executive Director since 2005.

In recent years, Wigmore Hall has been particularly enterprising in its use of digital media, enabling more people than ever to experience the variety and excellence of its concert programme and Learning events, reaching audiences across the world with high-quality content.