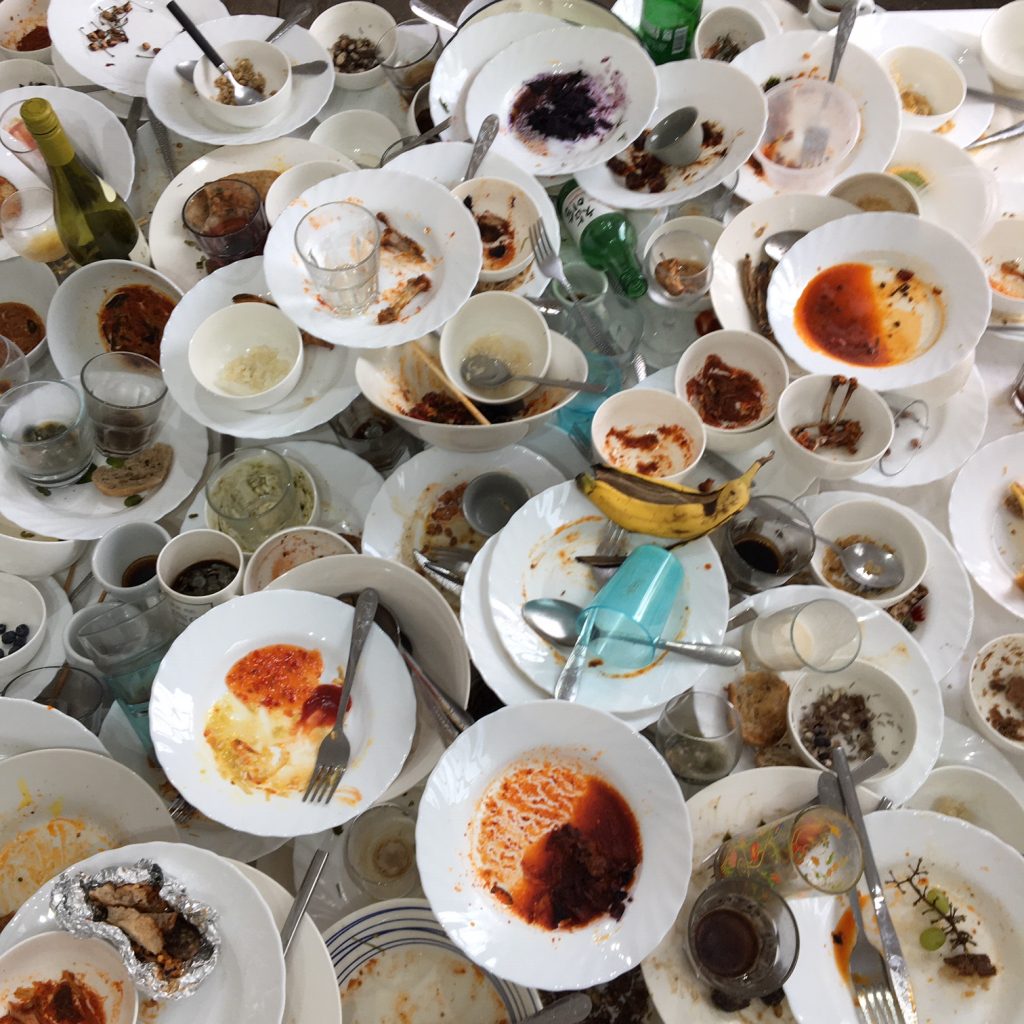 ‘Crisis’ moments are very much part of a discussion involving liminality and transitional periods of change – that we are currently seeing in the world, in the self
and in nationhoods….
unfortunately all happening simultaneously.
And as these inescapable layers of change and new realities take grip –
We are forced even driven into a survival mode!
A variety fair of survival modes!
Where each human combats and reacts to these ‘crisis’ moments in a range of personal or necessary collective ways.
This is actually a strand of humanity that is admired! – where we find real qualities of leadership?
One could say in a dramatic sense that life is just a series of crisis moments that challenge and evoke the human psyche – change the zeitgeist?
Moments that propel humans onto a new layer of immanence –
Cut and Pasted into a new way of thinking?
But of course that would definitely be to dramatic to suggest….

‘The Structure of a history’, 2020
Performance / video / installation

‘The Structure of a history’, is not for, but in part, a recourse to the sudden tragedy that set us on new rules and norms and the uncomfortable behaviours and life patterns that were not dared to be imagined before such a situation, which are now compromised from what we are used to, presenting itself in a different shape, that will show up again, and again, in a different shape.
The world Kang confronts at the dining table, she creates, at first normal, everyday, ever-changing, builds to a now stinking and disgusting place, however, as she sits there, she engages in a liminal response to an unforeseen situation and environment. We become in the presence of how she, and ultimately we, deal with an evolutional structural, physical, mental and emotional decay. But also, survival and pleasure, an understanding and confronting, and in that, there is also a beauty in what prevails, in the process of tracing the structure of a history. 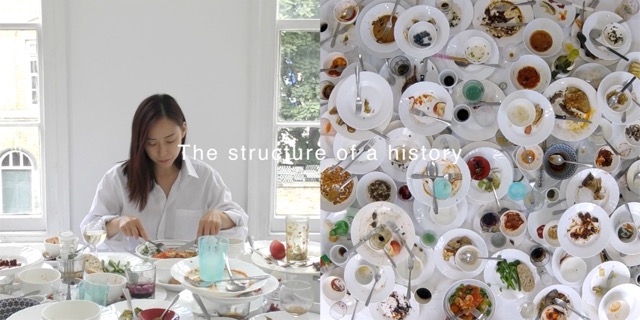 Seulgi Kang’s work deals with breaking down the simplicity and complexity of the ‘every day’, which, as so fundamental and common or uncommon, it is overlooked. Through the variation of ‘every day’, she questions her and our environment, the rudimentary balance of structure and subconscious rules, that for her seem to have already been granted, by default. Expressing circumstances surrounding a moment, where she is, she uses mundane objects and materials to create complex and nuanced performance films that are informed by poetry, history and human emotions. She dismantles and reconstructs form, space and function, embodying meaning to familiar form and actions which everyone engages in, anyone can do, or does. Seulgi Kang studied BA Hons Craft Design, Junnam National University, South Korea and has MA Fine Art from Chelsea College of Art. She has worked and exhibited in Seoul, Berlin, London and a recent residency in Estonia.

Martin Sexton’s ‘Indestructible Truth’ a Tibet UFO film that also reveals the mythical Shambhala – appears to be shot in a distant past, is watched in the viewers present, yet reveals an object (UFO) or portent from the future. Sexton’s work is often presented in the self-styled form of a: ‘Futique’ – described as a collectible work of the future – Futique being a portmanteau of: future/critique/antique and permeates through much of his practice – including specifically his levitation experiments, crop circles and UFO films. 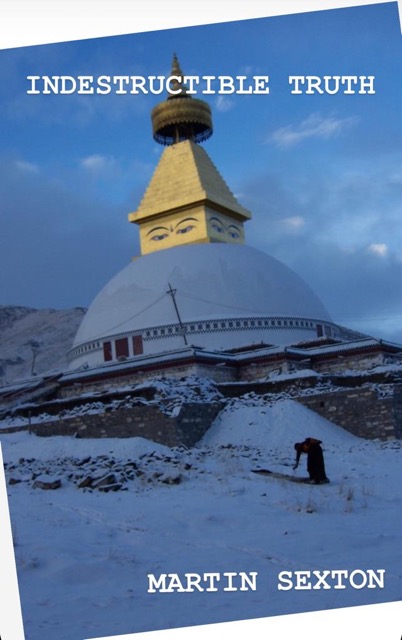 The concept of the futique was he says partly inspired by Alexander Trocchi but it also becomes in his own practice an idea in which he has in fact possibly inspired Trocchi. This approach in his work seems to deliberately designed to disrupt and detonate Bloom’s explorations in : The Anxiety of Influence: A Theory of Poetry – this counter-intuitive inspiration is not unlike the quantum world from which the term is now most identified, and much of this in his series of immersive historical UFO films such as in his Tibet UFO film: ‘Indestructible Truth’ – it appears as a temporal projection not only into the world of the Swiss Psychoanyalyst Carl Jung’s dream life, it is also in a real Tibet, but one where the mythical Shambhala is revealed – the whole event Sexton appears to have designed to act on the viewer like a resonant time machine.

This is a quantum world not just imbued with the counter-intuitive but also a perplexing narrative that asks questions: is Sexton inspired by Jung’s flying saucer auto-biographical dream from: ‘Memories, Dreams, Reflections’ (1957) or has he somehow managed to project his film into Jung’s hypnagogic dream? Or has the UFO of Jung’s dream interrupted both timelines?

Martin Sexton’s ‘Cognitive Dissonance’ explores Parapsychological phenomena and the mystery of psychophysical parallelism – a phenomena that has presented problems for mental health professionals – resistant to conventional explanation and elusive to psychiatric labeling. In this it seems to strangely resonate with the quantum world. This work explores what happens when a respected psychiatrist at Harvard Medical School interacts with 62 school children who all say they have both witnessed a UFO landing and encountered its strange humanoid occupants who also have a message for them and as a consequence – a prescient message for us in the age of the Anthropocene. The film is split-screened and features a UFO filmed by Sexton above The Temple of the Owls in Mexico. The film has historical parallels with William Blake’s 18th century visionary sighting as a child of an Angel in an oak tree in Peckham Rye, London. The idea that children may have preternatural insights or wisdom – owls are often associated with wisdom and appear to abductees as a totem in the symbolic order – but this concept of wise children has echoes going even further back – with the infant Christ in the Temple in Jerusalem, teaching the elders (Gospel of Luke 2:42-51) often depicted in art as: ‘The Finding in the Temple’ – notably by Albrect Dürer, Rembrandt and Ribera.

Sexton’s is a quantum world not just imbued with the counter-intuitive and liminal but also a perplexing narrative that asks questions: is Sexton inspired by Dr John E Mack’s encounter or the children’s even more extraordinary encounter or has the UFO of Sexton’s film interrupted all timelines, the concrete and the ephemeral? This blister in time that is entirety absent from the conventional art world is one however that has preoccupied physics as well as the experimental literary world. Again his futiques are filmed somehow in the past, witnessed in the present & yet reveal objects or portents from the future.

Martin Sexton is an Irish writer, filmmaker and artist, based in London. Yet he describes all his work in whatsoever medium as writing – when this extension of his writing manifests into objects, it is in unconventional material, such as: 4.5 billion year old meteorites, volcanic obsidian – or he is writing in ice – such as his large series of temporal ice poem installations – one marking the exact grave of William Blake for the very first time on his 250th anniversary or for Milton on his 400th. In his large scale installations or immersive Futique ‘UFO’ films, he merges the quantum with the secular world in explorations of the esoteric and outer limits of consciousness. When his work encompasses his sonic experiments – real levitation -in scientific peer-reviewed experiments, he is levitating objects in a laboratory with his long time collaborator and friend the physics professor Dr Deak using sound or acoustic levitation- or in his collaborative soundtracks – it becomes resonant with the critic Walter Pater’s statement that:

“all art constantly aspires to the condition of music”

These films are from a large series of so called Futique ‘UFO’ films created, documented or witnessed by the artist which include: ‘Free Stonehenge’, ‘24 Hour Abduction’ , ‘Bloodspell’ and ‘Morphic Resonance’ 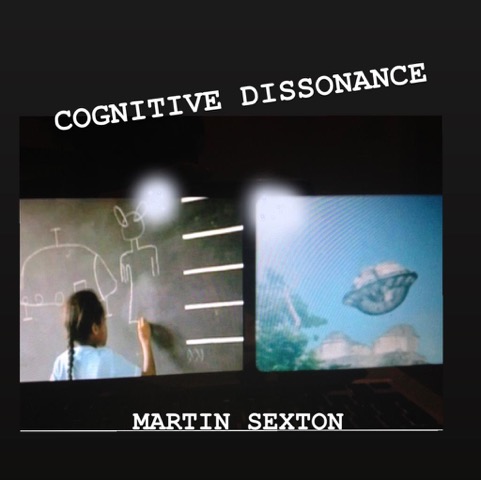