Black Shade Projects, the art and exhibition platform championing photography and photo-based work documenting visual culture across Africa and the diaspora, announces their second exhibition, running to coincide with 1-54 Contemporary African Art Fair, Marrakech. Curated by Lisa Anderson, the show explores the feminine subject within contemporary African art and photography, through the work of Malian photographers Adama Kouyaté (b. 1928) and Abdourahmane Sakaly (1926-1988), alongside the British-Ghanaian contemporary artist Adelaide Damoah (b. 1976). 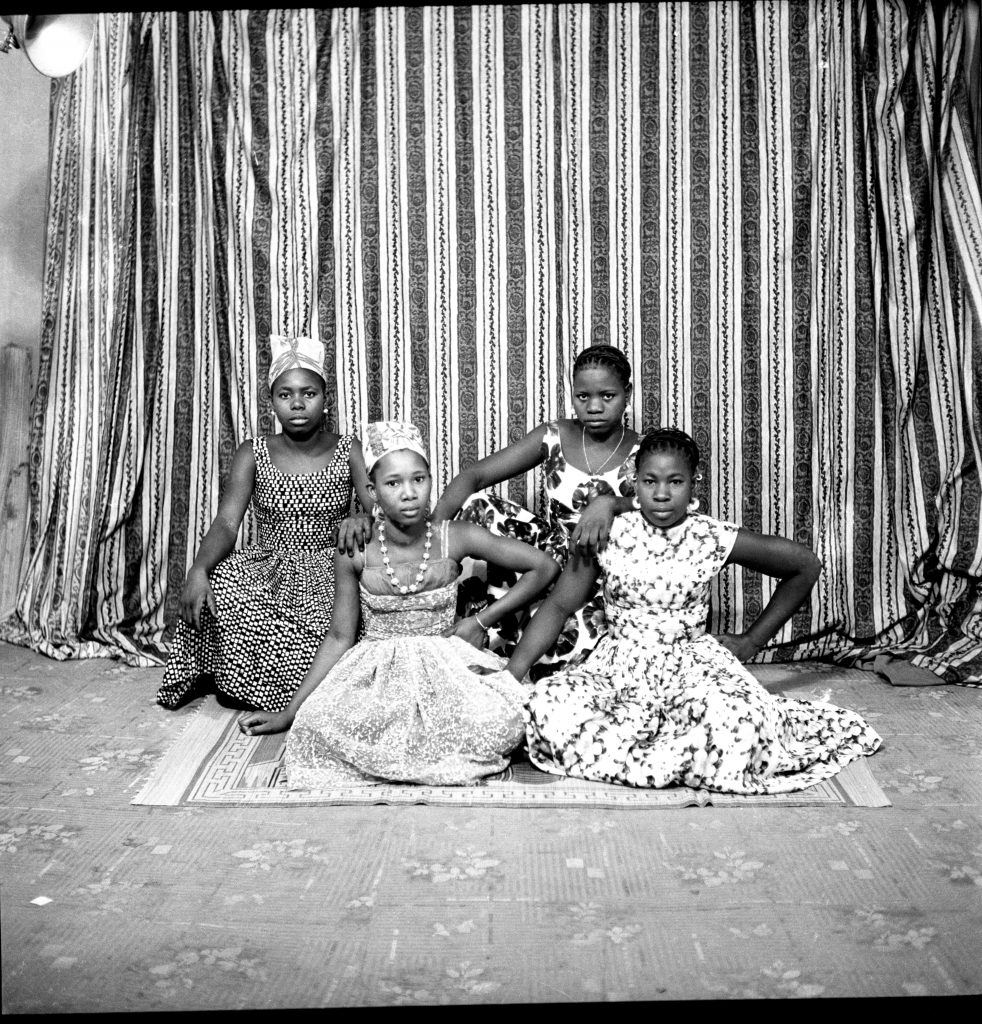 Presented in collaboration with the inaugural edition of AFREEculture, a new annual salon celebrating creativity from Africa and its diaspora, the exhibition will be hosted at the boutique hotel Jnane Tamsna in the heart of the Palmeraie in Marrakech.

Contemporaries of Malick Sidibé and Seydou Keïta, Kouyaté and Sakaly bear testament to the wealth of photographic talent emerging from Mali since the mid to late 1900s. With a curatorial focus on women of the era, the works’ focus rests in the context of on the agency and power of the female gaze, across a newly independent Francophone Africa. At a time of immense change – bringing with it hope, freedom and a blossoming modernity – a new language of personal expression, of stylised visual identity, is documented through studio photography. Fusing imported western fashion aesthetics with local, cultural dress and accessories, each subject embodies a unique personality, set of experiences and aspirations. Shown alongside a new work from Damoah, and activated through an accompanying performance piece, the exhibition addresses not only the representation of the female gaze as subject, but considers them as gatekeepers of culture.

Also on show is a series of works by artist Youssouf Sogodogo, titled Hairstyles of Mali (Les Tresses du Mali). Started in Mali in the 1980s, the series explores the culture and storytelling of female hair braiding. Preserving the craft through his photographs, Sogodogo highlights the importance of this shared culture, both within and beyond the African continent. The works are presented alongside poetry from Ghanaian writer Emmanuel Boateng.

A satellite performance from Enam Gbewonyo (founder of the Black British Female Artists collective) takes place in Dar Bellarj – a foundation which promotes and champions women of the Medina. The performance continues her ongoing series exploring gender and domesticity through women’s tights.

Following from the success of our inaugural exhibition in October, we are proud to present our second iteration in Africa’s Capital of Culture for 2020, Marrakech. Working alongside the BBFA, as well as the brilliant AFREEculture, the exhibition’s curatorial concept celebrates what it means to be a female living and working across Africa and the diaspora today.

About Black Shade Projects
Black Shade Projects is an art and exhibition platform, founded by Myriem Baadi in 2019, and centred around photography and photo-based work documenting visual culture from Africa and the diaspora. Representing an important body of black and white photographic works, Black Shade Projects highlights the Malian golden era of studio photography to which prominent names such as Abdourrahmane Sakaly, Malick Sidibé and Adama Kouyaté are often associated. The platform and it’s travelling exhibition space hosts international pop up projects committed to uplifting previously silenced and overlooked African artists, as well as championing emerging talent. Their inaugural exhibition was held at Ozwald Boateng’s Savile Row tailors, Mayfair, London from 1 October – 1 November 2019. A further exhibition is planned to run in New York in May 2020.

About Adama Kouyaté
Portraitist and studio photographer Adama Kouyaté was born in the French Sudanese village of Bougouni and was introduced to photography when he sat with a friend for a studio portrait in Bamako, Mali. This experience inspired him to pursue a career in photography and Kouyaté honed his craft in the city of Bamako where became an apprentice Bakary Doumbia, a well-known studio photographer at the time. In 1949, Adama Kouyaté opened his first studio, “Photo Hall Kati,” in Kati, near Bamako. Following this, Kouyaté travelled across West Africa (over a period of ten years) fleetingly residing in Lomé, Togo, Abidjan and Ouagadougou, to eventually settle in Bouaké, where he established the studio Photo Hall Ivoire. After the 1968 military coup, Kouyaté returned to Mali and set up a studio in Ségou, where he continues to live and work to this day.

About Abdourahmane Sakaly
Abdourahmane Sakaly, originally from Senegal, moved to Bamako in 1946 where he later opened a studio. Introduced to photography in his youth by one of the fathers of Senegalese photography, Meïssa Gaye (1892-1982), he quickly established the first Bamako studio during the 1960s. Alongside Malick Sidibé and Seydou Keïta, Sakaly was the most renowned photographer working in the city at this time.

His work depicted a modern Mali during a burgeoning Independence. In addition to portraiture, Sakaly documented social events and private functions for military and police officers and other elites in the city, and created class pictures for school children, advertisement prints, and images that documented accidents for the police. Sakaly died in 1988 and his work was largely was rediscovered in 1994 by Revue Noire.

About Adelaide Damoah
British-Ghanaian artist Adelaide Damoah (b. 1976) lives and works in London. Using her body as a “living paintbrush” to paint or print onto various surfaces, Damoah was initially inspired by a desire to subvert Yves Klein’s “Anthropometries”. Alongside live performances including body printing and writing, the artist also works with photographs and found texts. Damoah is interested in the use of recorded history to generate a spontaneous response.

Solo exhibitions to date include: Genesis; This is Us; Supermodels; Black Lipstick, and a domestic violence exhibition for registered charity, the National Centre for Domestic Violence. Performances to date include: This is Me the Inconsistency of the Self; My Body is Present; Homage to Ana Mendieta #MYFACE, and Into the Mind of the Coloniser.

About Enam Gbewonyo
Enam Gbewonyo is an artist, curator and founder of the Black British Female Artist Collective (BBFA), a platform supporting emerging black women artists to build sustainable careers whilst working to advocate for more inclusivity in the British arts landscape.

In 2017, she was selected to take part in the 22-month International Curator’s Forum, ‘Beyond the Frame’ development programme, engaging with leading international art events such as the Venice Biennale, Sharjah Biennal and Documenta as well as masterclasses with the likes of the late Okwui Enwezor, Robert Storr and Trevor Schoonmaker.

About Youssouf Sogodogo
Born in Konzanso, Mali (1955) Sogodogo currently lives and works in Bamako.
Beginning his career and education in museum administration, from 1982 to 1985 he served as director of the Sahel Museum in Gao, where he took up photography, and then as textile conservator at the National Museum in Bamako. He moved to the photography school Helvetas-Mali (Association suisse pour la coopération internationale) in 2002 and has served as director since 2005, when the school – now called CFP (Cadre de promotion pour la formation en photographie)- came under Malian control. He has exhibited in Senegal, Japan, Switzerland, France and Morocco, as well as the 1996, 1999, 2001, 2005 and 2009 Bamako Biennales.

About Myriem Baadi
Myriem Baadi is the Founder and Creative Director of Black Shade Projects, based across London and Marrakech. Before founding Black Shade Projects, Baadi worked as an art advisor and curator specialising in art from across the African diaspora. She received a Masters in Art Law & Business at Christies Education, London in 2017, following her graduation from Central Saint Martins, London in 2009.

About Lisa Anderson
Lisa Anderson is an independent curator, writer and art advisor with a background in International Relations and Human Rights. In 2015 she developed @blackbritishart as a curatorial enquiry into the contemporary art practice of artists from the African Diaspora in the UK. She has curated and sold works of award-winning artist for firms such as Latham and Watkins. She participated in the International Curators Forum ‘Outside the Frame Programme’ for emerging curators between 2017 and 2018. She is an advisory board member for Addis Fine Art and Uchenna Dance. In 2019 she founded Lisa Anderson Art Advisory (LAAA).

About Dar Bellarj
Dar Bellarj Foundation Marrakech is located in the oldest district of Marrakech, close to Ben Youssef Madrasa. The foundation aims to promote the living culture in the medina through the transmission of knowledge and appropriation of traditions – particularly valuing the mothers of the Medina. Dar Bellarj Foundation organizes concerts, performances, workshops and exhibitions.