Delfina Foundation recently launched its new publication Politics of Food, which gathers together research dating back to the origins of the foundation itself. The book, a hybrid between a sustainability-manual, a recipe diary, and an art catalogue, contains a variety of thoughts, provocations, conversations, strategies, solutions, and recipes from a variety of experts, artists, and amateurs working with, or around food. 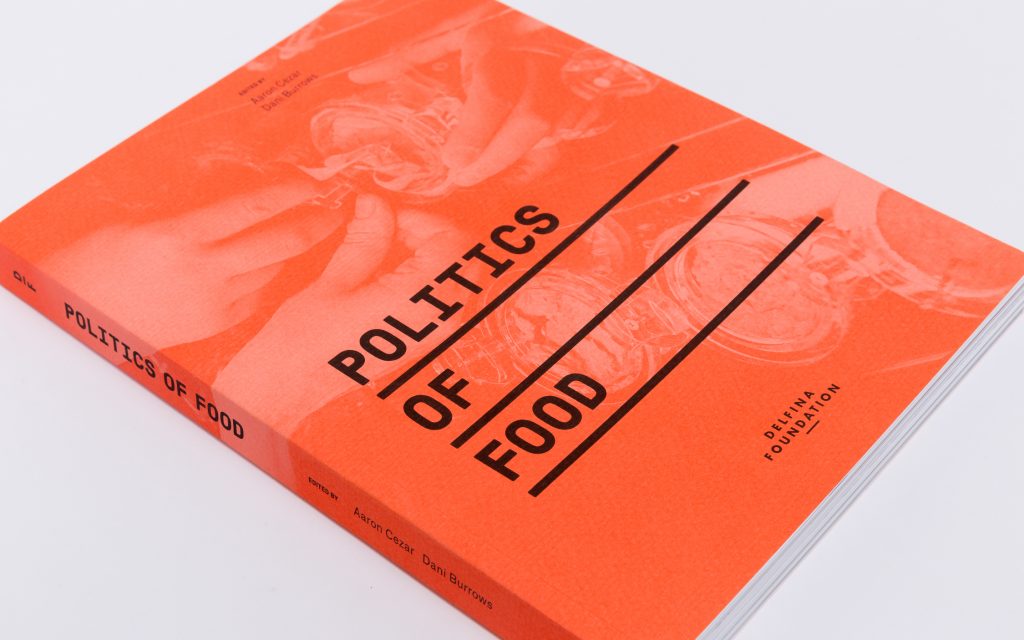 Strictly speaking, Politics of Food is the result of Delfina’s eponymous thematic programme— a six years-long involvement with issues stemming, or resulting from the various meanings of food. The publication is articulated around four divisions, in which food becomes identity; the starting point of diverse journeys; the core of discussions around our future; and the pulsating energy reuniting communities. 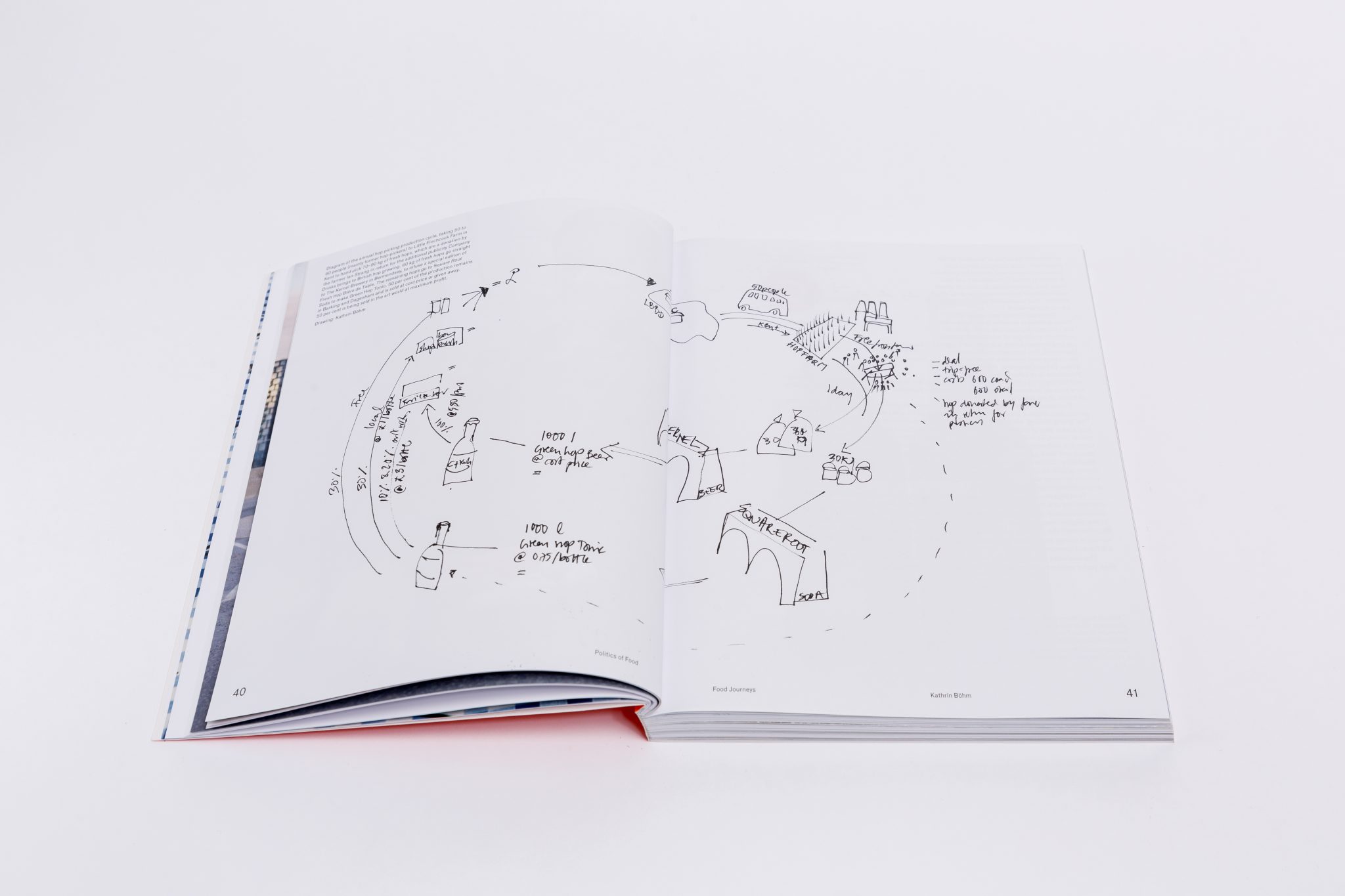 The art-world has recently devolved increased attention in the field of food art, with the extensive exhibition at the V&A FOOD: Bigger Than The Plate signalling interest from big institutions as well. But even before this ‘art food craze’ Delfina Foundation was already working to give a space to creatives from all over which were using the various faces of food to create work. The foundation has always been at the forefront of supporting, developing and providing a platform for creative practitioners and researchers interrogating the global politics and ethics of food. Delfina itself started out in a chocolate factory, where its predecessor ‘Delfina Studio Trust’ offered studio spaces to some 30 artists. In the space, alongside a huge gallery, there was an acclaimed restaurant where residents could eat for just 1£. There, rather than just sharing an affordable meal, creatives found a new channel where they could share ideas and foster long-lasting collaborations.

Since then, the organisation has held over 90 residencies with international artist and thinkers exploring food issues and paths. The programme involved many realities marking our everyday lives, including workshops, family lunches, talks, performances, exhibitions, and more. It also provided hands-on help and investigations in farms, old culinary houses, community gardens, farms, factories… The recently published book reflects exactly the wide-ranging nature of Delfina and its programme. Far from respecting the conventional composition of an art-catalogue, it offers a more eclectic and interesting content. 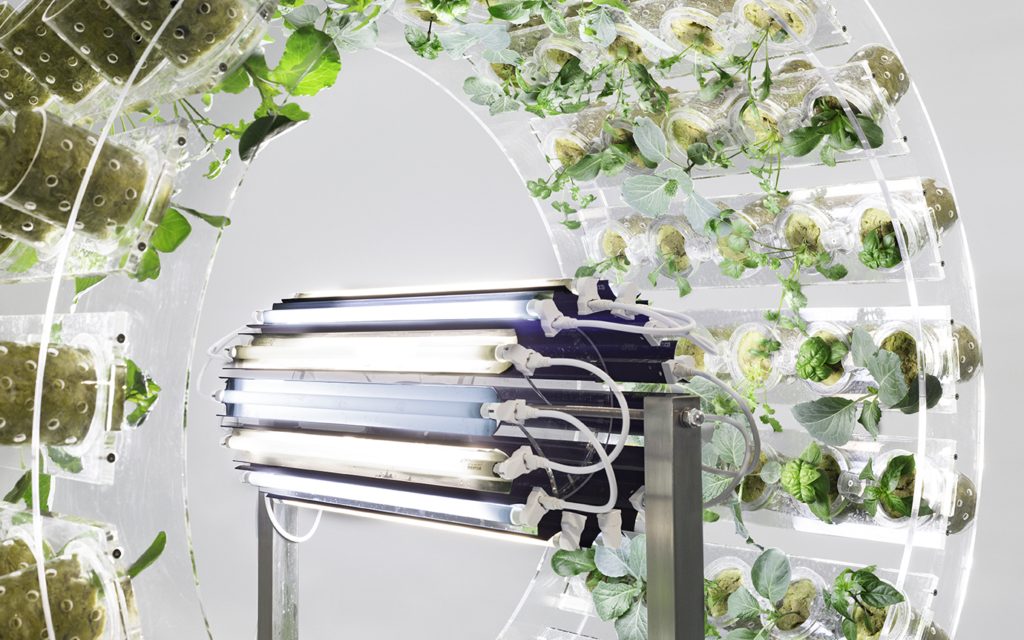 Nick Laessing, ‘Plant Orbiter’, 2017. galeriepcp Paris. Photo Margot Montigny. Currently on view at Delfina Foundation as part of ‘Adapting’, in the Season 4 of ‘The Politics of Food’.

As Aaron Cezar, director of Delfina Foundation, writes in its introduction, “this book is neither a record of Delfina Foundation’s work, nor a comprehensive survey of all issues or all artists working with food. [Rather] it is a document of new thinking.’ During the launch of the book, celebrated with feast-like lunches and dinners organised by peolple present in the book, Cezar also remarked:

The book? We didn’t want it to be a catalogue. We’re trying to go beyond Delfina Foundation itself. We love this space but we want to interrogate it further. We want to be driven forward. This book is the beginning of a long project. There, we make visible all the work that happens here, which remains otherwise invisible to many, even to the artists themselves.

Candice Lin’s menu for the banquet ‘ Subletlies and Warnings. Power and the Edible Grotesque at Delfina Foundation’, London, 29 January 2014. Page from Politics of Food (2019).

The book launched the only way if possibly could— through a Family Lunch, prepared and devised by Custom Folkstone. This artist-led food project space works closely with producers (farmers, community gardeners…) to always have ‘natural’ ingredients, while continuously questioning what ‘natural’ is, or might be. They try to act at the crossroad between art and food, creating spaces with innovative meanings, where to discuss issues around food production, sustainability and culture.

The publication is structured across four themes: Food Journeys, Food Futures, Food and Identity, and Food and Hospitality. The process of creation was very much open and welcoming. As Dani Burrows, co-editor of the book, remarked:

The scope really shifts across the book. We left it open to artistic contributions, so there’s some short stories in there, there’s recipes, drawings. It really is a kind of journey as you move through the book.

In the first section food becomes a story to be told through popular imagery, memories, dystopic travels, reflections (The Empire Remains Shop by Cooking Sections is a must read), and a menu celebrating maligned plants– an impetus to think about the widespread fear of the ‘other’.

Page from ‘Food, Fantasy, and the Realities form the Anthropocene,’ by Jane Levi. Part of ‘Food Futures’ in Politics of Food (2019).

As I highlight in many of my articles, food and identity are strictly correlated. Not only because ‘we are what we eat’ but also because what we can eat revels who we might be forced to be. The relation between food and culture can seem straightforward (local dishes peculiar to a specific city/region, varying eating habits, different financial resources reflecting on the plate…), but there are so many hidden levels to this. In these chapters, for example, Lantian Xie reflects on food and petrol culture in Dubai; Elia Nurviusta shares her work Früchtlinge, responding to conversations held with migrants in Berlin; Daniel Solomon offers some photograph from his project Self-portrait as a Sausage as a way to think about consumption, and the body as vessel.

Spread from Leone Contini’s chronicle ‘ Feed Your Head / Uncontrolled Denomination’, as part of the chapter on ‘Food And Hospitality’ in Politics of Food (2019).

The idea for the closing chapter, Food and hospitality, begun with Delfina’s family lunches, and expanded with artist working in conviviality. Discussing the various faces of hospitality, it begins with a conversation between curator Marta Arzak and chef Ferran Adrià. Here, they retrace their collaborations on documenta 12 and elBullifoundation. There follows excerpts from Raed Yassin’s CookSongBook; the Center for Genomic Gastronomy’s speculation on future hospitality forms; some ideas from Leone Contini’s social experiment Uncontrolled Denominations.

Hopefully, thanks to this book, and Delfina Foundation’s seminal and continuos engagement with the deeper meanings and issues regarding food, the art-world will start thinking about the importance of analysing the extended meanings of food.