This winter, internationally acclaimed artist Jony Easterby will premiere a new project where beautifully animated illustrations will be projected across buildings in Nine Elms, by the Thames in central London.
Created using Pippa Taylor’s faithful depictions of the area’s namesake elm trees, the work will invite London visitors and local residents to see buildings in the area in a new light from 13th-21st December.

“As a child in the 1970s I was only vaguely aware of the disease that ravaged the elms throughout UK and Europe. Once a common tree of hedge and field it is almost incomprehensible that this iconic tree is almost extinct in the UK. The elms of Nine Elms are a testament to natures resilience and a symbol of hope that we can rebuild ecologies that face extinction through human knowledge and perseverance. The symbolism of these elm trees at this time in our ecological crisis has never been so important as we face new complex challenges to our arboricultural heritage and ecosystems. This project allows us to create new connections between hand-drawn 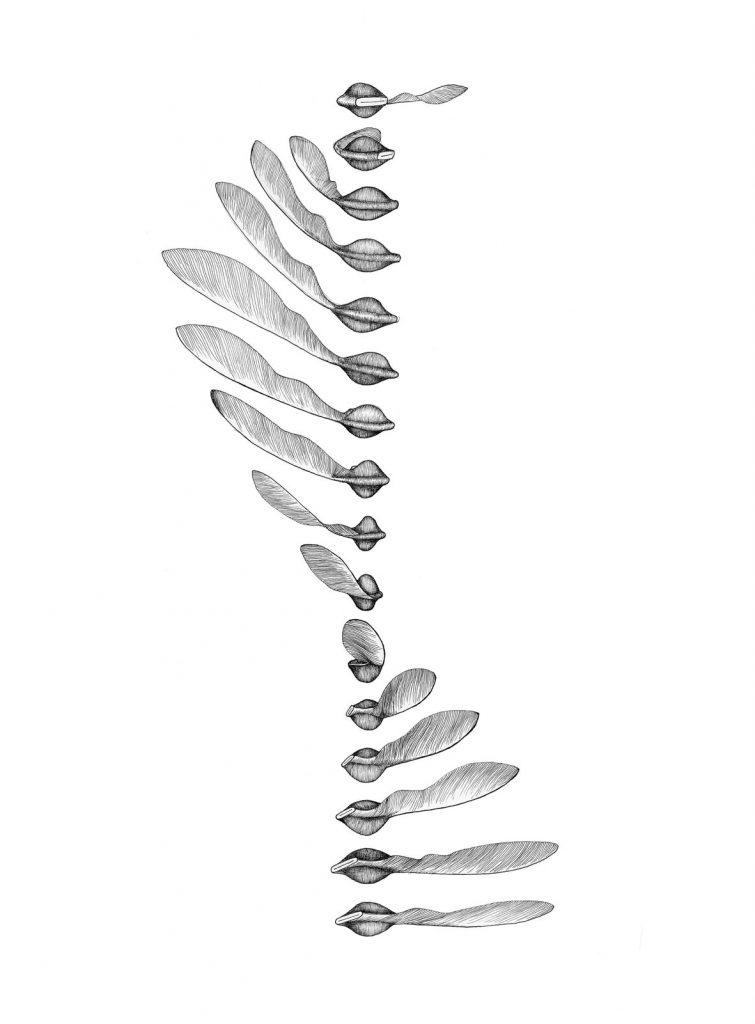 and digital arts, the concrete and the organic as well as highlighting the essential role that trees must play in all our lives for our survival on this planet which we share.”

The large scale light installations are a festive treat suitable for all ages and the highly visual outdoor work is free of charge to visit. This specially commissioned visual spectacle, Light Up Nine Elms, will utilise residential blocks, construction sites and public plazas as the canvas for this ambitious, site-specific after-dark artwork, which has never been seen before. Buildings will be lit up after dark.

“My inspiration comes from the beauty of nature and the deep sadness that comes with it – as in these times we can’t take this beauty for granted anymore. The drawing process for me is always accompanied with music, when drawing the Nine the structure and character of traditional Irish music played into their creation. I work with a very fine pen, to ensure the drawings can withstand the enlargement of scale for the monumental projections. I have to enter this space of intense stillness where no mistake is possible. My inspiration come from both the simplicity and form of Japanese paintings of trees, their execution and simplicity of the line as well as the rich history of botanical illustration from C18th etchings. I love the fact that from the starting point of my drawing in the studio, through Jony’s digital animations and projections, I can share my joy in the detail and beauty of the tree with thousands of people.”

The Nine Elms place name has been traced back to the 17th Century and nine elm trees were known to be standing on Nine Elms Lane in the 1840s. The row of elms are thought to have been replanted several times since then. In January 2019, the Nine Elms community re-planted the last two elm trees which had been missing since one tree was blown down in a storm and one was felled due to disease. The installation is a unique way to consider and interact with this special spot of nature and heritage, to enjoy the architecture of Nine Elms and get together with friends or family, after work or after school, to celebrate the winter season. 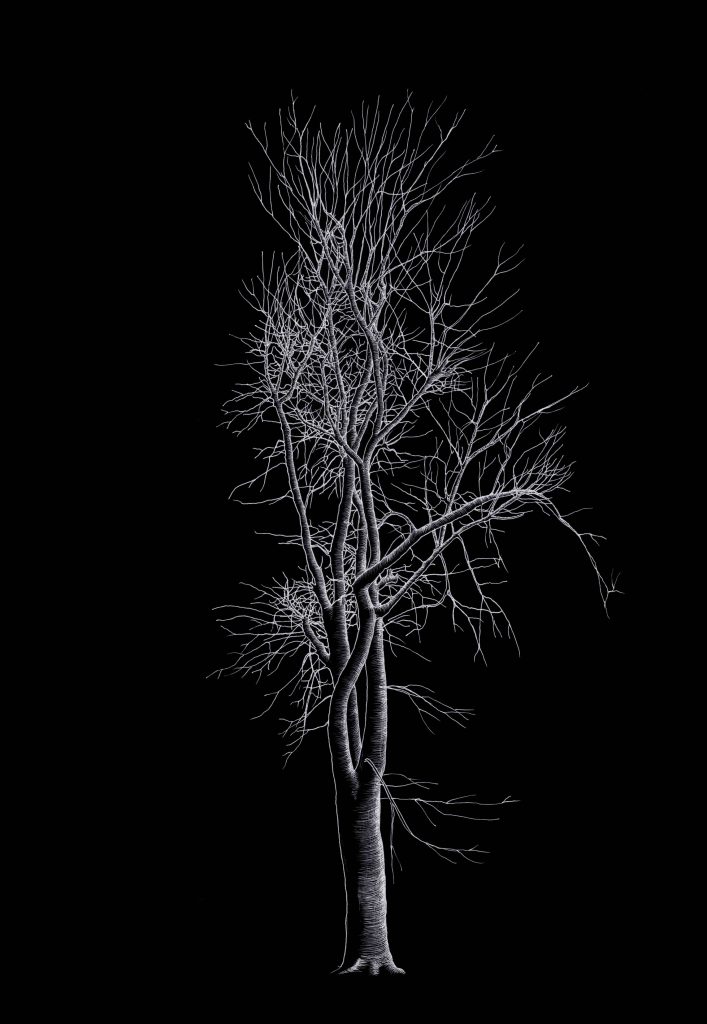 “Translating our historic nine elm trees into light projections is a fantastic celebration of this part of Wandsworth as it grows into a new central London destination. We’re proud to have been able to host this wonderful winter light installation on buildings old and new, so I do hope that as many residents as possible get the opportunity to see the beautiful illustrations. Rooted in our local community, these elm trees have been a landmark for generations so we’re delighted to welcome visitors to see the illuminations and discover more about Nine Elms.”

About the artists
Jony Easterby is an artist, designer, maker, producer, director, performer, and a passionate naturalist and plants-man. His work is characterised by the diversity of artistic practice used and the range of technologies employed. Each project can be radically different but there are key ideas and interests informing the approach. There is empathy for the natural world and a sense of its place within culture and social context. Using both digital and analogue media, Jony investigates the boundaries between raw elemental materials, sound technology, composition, landscape and architecture. A breadth of expertise in a wide range of artistic skills has found him developing projects as varied as the construction of intricate sound sculptures, audio-visual installations, architectural constructions and the artistic direction of large-scale performance projects (For the Birds, Sounding the River, Remnant Ecologies).

Pippa Taylor is a long-term collaborator of Jony’s, and partner. She is an artist based in mid Wales. She works as a musician (violin), sculptor and painter, specialising in wood carving, joinery and applied decorative painting, for public and private commissions. She has collaborated with Jony on all the large-scale projects above, and most recently as a musician and performer in the latest production Tree and Wood. Pippa studied Painting at the University of Birmingham, before discovering wood and carving, which she then continued to study. She was a woodcarver for 20 years, creating public and private commissions, incl. Lickey Hills, Birmingham, working in large scale / life size sculpture. Due to injury she had to scale down and continued carving the heads on Violas d’amore, a specialist old string instrument. The first tree that Pippa drew was painted on a double bass that was given Jony and Pippa, this was the starting point for their artistic explorations around Trees and Wood, which developed into the folk music outdoor show ’Tree and Wood’ and these projections for Nine Elms. At a residency at Sura Medura (Intl artists residency in Sri Lanka) Taylor challenged herself to draw a tree every day, most of these pieces have since been sold at galleries in United Kingdom.

Nine Elms has always been a critical part of London’s landscape. Its past is one of commerce and industry, its future is of enterprise, art, culture and living. Nine Elms on the South Bank is the name given to the ‘opportunity area’ that sits between Chelsea and Lambeth bridges. It includes Vauxhall & the Albert Embankment to the east and Battersea Power Station to the west.
The area is being regenerated by Wandsworth and Lambeth councils working together. The development programme is extensive, including an extension of the Northern Line with two new stations opening in 2021, new parks, leisure, health and school facilities, and new access to the Thames River Path. The new US Embassy is located here, and development partners are building 20,000 new homes, a brand New Covent Garden Market, business premises, shops and spaces for cultural exchange. The development is creating 25,000 new jobs.

The vision is a long-term one; to transform one of the capital’s last remaining industrial districts into an amazing place for Londoners old and new to call home. Today’s reality is an exciting one; new spaces and places coming to life every day. @nineelmslondon