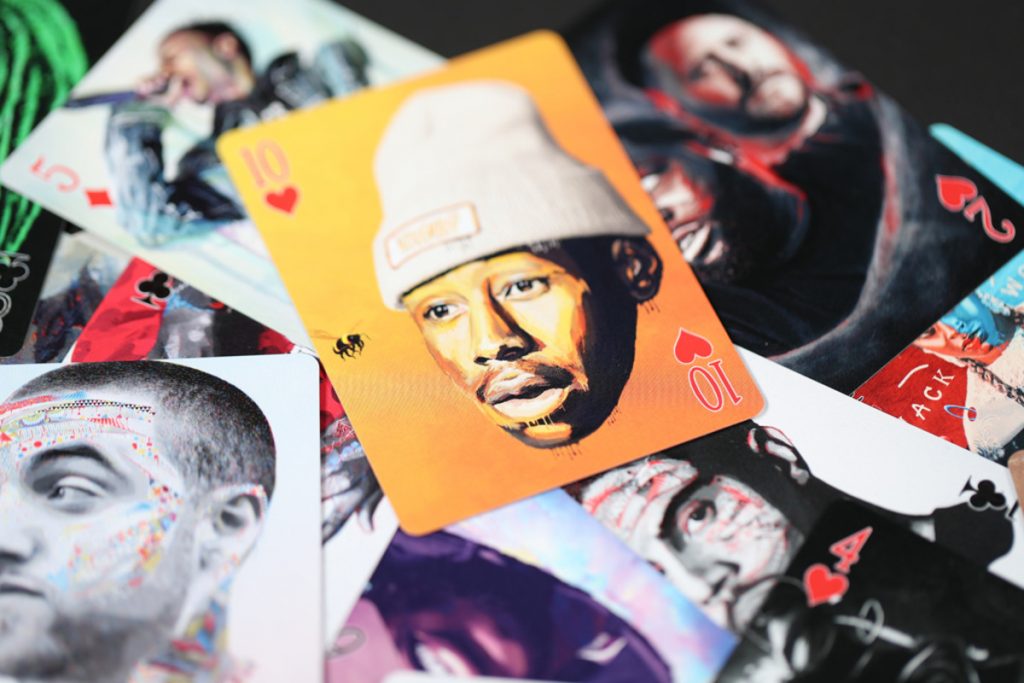 Brandon Spahn is the visual artist, who came up with the idea of illustrating famous rapers onto playing cards. Generally, cards have a long historical background and carry the most interesting facts of development. In modern days, there are different variations of cards, thanks to the technological development and creative approach of designers.

Thanks to him we are able to play our favorite card games containing the images of our favorite singers. Brandon Spahn is 26 years old and has spent the last six years creating artist infused playing cards. Everything started when Brandon and his roommates needed to decorate their room, and that ended up with a display of matte painted vector gorgeous unique playing cards.

The artist uses Photoshop and Illustrator for developing his work and it is inspired by the artists’ music. One of his most famous works is the illustration of Mac Miller, “Doves In The Wind”, that has also brought him an online following as well.

We recently caught up with Brandon for an  interview  see below

What drove you to pursue visual arts?

I was a member of an active community, and they had a forum up, and the community owners had a competition to design a banner for the forum. I looked up how to do that, downloaded a free, open-source version of Photoshop, and made the banner. After that, during my sophomore year, I won the prize for the shirt of the day and the shirt of the week, after participating in one designing contest.

Where did you get inspiration for your current style?

In matt printing artworks you take a couple of different images and paint over them in Photoshop to create new images. I do that a lot with these hip-hop illustrations. I have a vector, abstract style, where I start with a rough vector. That’s drawing basic shapes over an image. I do that in Illustrator and then finish it in Photoshop. That’s like the Mac Miller one.

Talk to me about your hip-hop deck project. Why cards?

I started this project before I knew I wanted to turn it into a card deck. In my junior year of college, I was living with three other people in my apartment, and we all listened to music a lot. We just wanted some stuff to hang up on the walls. For fun, I illustrated my first four: Lupe Fiasco, Kanye West, Drake, and Eminem. Those were hanging in our apartment and I had that will do continue creating something digital and creative.

How did you pick which rapper gets what suit/number?

I kinda base it off their music. 50 Cent got shot nine times, so I made him number nine. I put Drake as a Queen because I thought it would be funny, thinking about his personality. Also, artists are historically higher in the echelon of people’s minds. Mac Miller, I picked the colors based on Faces. Young Thug is green. A lot of the artwork is based on aesthetics.

You started the project in 2013. What is the evolution of these six years?

These are not drawn from 100% scratch. The old process was taking images, pulling them in Photoshop, and painting over top of them, which is what I learned from matte painting. The overall shading and highlighting are built from the original image. With the vector style, I’ll add basic shapes and detail them. Nowadays, I have a tablet, and I take photographs and paint over them. I add things.

The first few illustrations were for fun and to have something to hang in the apartment. The more I got into hip-hop, I started basing the illustrations off of [the] music. I’ve learned more techniques. I’ve gotten better at lighting and making the image have more life.

What’s been the biggest challenge for you across the past six years of illustrating?

In addition to the cards, you also do gorgeous prints. I have two in my apartment. How has the reaction to your work online surprised you?

I love it! It’s crazy to me! People in countries I haven’t even visited: New Zealand, Switzerland, Germany… They’ll order my artwork, and it blows my mind to know my artwork is out there in somebody’s place. That’s the craziest thing to me, especially growing up in a small town. I don’t make a lot of money off them. I don’t do it for the money right now. It’s cool my artwork is out there. It’s fun and exciting to see people talk about my artwork in a way I’ve never imagined.

What is the best creative advice you’ve ever taken?

That’s the funny thing about growing up in a small town. I didn’t talk to a lot of creative people. My grandma was a painter, though. Working and talking with her meant a lot to me. It was cool seeing her being creative, and it inspired me to take this career path. It was just working and seeing her be creative. It stuck with me, and I enjoy creating because of her.

Brandon Spahn was born in a small city in Indiana and he has not been arrogant about his works and him being a recognizable artist. Moreover, he makes little money off his prints and pursues art strictly for the love. When he sees the recognition of his work throughout the world, he does not feel a sort of gratitude. He wants to experiment more and to reach new heights with his next works.