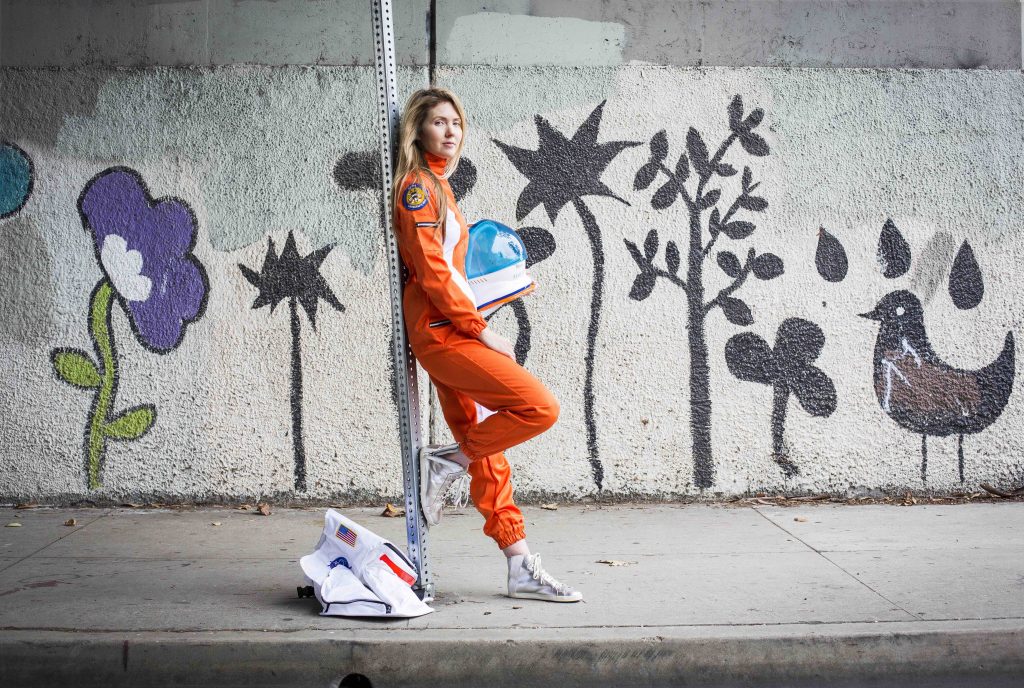 Beatie Wolfe is an artist who has beamed her music into space, been appointed a UN Women role model for innovation and held an acclaimed solo exhibition of her ‘world first’ album designs at the V&A Museum and is the subject of an up & coming new music documentary commissioned by the Barbican Centre. We managed to track her down in Los Angeles to ask her some questions about now and the future.

Who are you? What are you, Artist, Musician, Technologist?
I’m Beatie Wolfe and I’m “a musical weirdo and visionary.”

Can you tell us about ‘Orange Juice for the Ears: From Space Beams to Anti-Streams’
This is the title of a documentary about my work, commissioned by and premiered at the Barbican, and directed by Ross Harris. “Orange Juice for the Ears” is taken from a line by neurologist Oliver Sacks about the power of music. His book Musicophilia inspired me 5 years ago to start the Power of Music & Dementia research project, so he really is a key influence for me. Because the documentary covers my music and dementia work (as well as my other innovations) it felt like a good fit. The film takes a really nice, grounded look at some of the weird and wonderful things that I do and create, like beaming my music into Space via the Big Bang horn with Nobel Laureate Robert Wilson (who discovered Cosmic Microwave Background) or creating an anti-stream from the quietest room on earth.

You had an exhibition at the V&A – what was it on and how did it happen?
My V&A exhibition ‘The Art Of Music In The Digital Age: A Series Of World-First Designs By Beatie Wolfe’ was a retrospective of all of my album designs over the years, which was completely surreal, especially as the V&A has always been one of my favourite museums and the ‘Bowie Is’ show blew me away. Getting to exhibit my work in a solo gallery there and work with the ‘Bowie Is’ curatorial team was an absolute life highlight. It was the first time I could show people how these innovations, while seemingly very different in design or output – e.g. a woven Record Jacket, a theatre for the palm of your hand, an intelligent deck of cards, a Mylar-wrapped Space Chamber – were all connected by a continued exploration of the same thinking and intention.

Can you tell us about Green to Red: An Environmental Statement of Our Times?
‘From Green to Red’ is an environmental protest piece about human impact on the planet, built using 800,000 years of historic data to create a visualization of the CO2 concentration in the Earth’s atmosphere. The title is taken from a song I wrote in 2006 after seeing ‘An Inconvenient Truth’ although I didn’t record the song until years later as I believed that everyone would see that film and within a year or so we’d be on the right path. When that didn’t happen and the situation only intensified to a point of being absolutely critical I wanted to find a way to make people literally see the data differently, so it could communicate where we stand in a fashion that was both comprehensible but also evocative. So I shared the idea with The Mill, the brilliant VFX company, and we’ve been working on bringing this to life. At the Barbican, I did a teaser installation of the project but there’s much more to come and we’ll be doing a talk about it at SXSW’20 and a big takeover on Earth Day 2020.

From your work it is obvious you are well versed on the environment and global warming – how do you stay positive despite all the negative data?
Because we have to. What other option is there? I feel like we have to keep on finding ways of helping, inspiring, uplifting, however we can. If not for our own benefit, then for those who will come after us. I do get depressed about the state of the world and how we treat one another and the planet but then I feel like I could be using that energy to do something good. I think it’s about making people feel like they can do some good too, whether it’s big or small, and that’s of value. It also gives me great hope to see the incredible young activists like Greta literally changing the world right now. They are the true rockstars of today.

For your new album, you worked with Linda Perry – you seem to collaborate with some amazing people – why do you think they want to work with you?
Well, that’s kind of hard to answer but I imagine it’s because I am doing things differently, I am thinking about things differently, and I think that can be inspiring and empowering for people, particularly in an industry that is so at odds with curiosity, honesty and original thinking.

You are a UN Women Role model – what does that entail?
Well, it entailed seeing my face a lot of places, including all over Times Square and the WTC, earlier this year for a global billboard campaign where I was featured alongside 8 other incredible female innovators. The idea was to show how easily we can name male entrepreneurs but how the same is not true for their female counterparts, so it was about being truly “Impossible to Ignore.” I also did some great work with Amy Poehler’s Foundation Smart Girls and there are a few more things to come.

Finally, 2020 seems like it’s going to be an amazing year for you, where would you like to be at the end of it?
I have no idea! Happy, alive, inspired and surprised… the best things I’ve done so far, the things I’m most proud of (88% of which made up my V&A exhibition) were not necessarily on the road map. So I never like to have too rigid a plan or an idea of success. I think that often we cannot begin to imagine what we can create or facilitate until inspiration strikes and it unfolds. It’s also the case that my next record installation, which is pretty much entirely mapped out, will be unveiled at one of America’s leading museums in 2021. It’s odd having such a long lead time as I’m used to the opposite but that’s the museum world. So I’m building the next couple of years at this point, while also taking everything day-by-day, moment-by-moment.

Named by WIRED as one of “22 people changing the world,” Beatie Wolfe is at the forefront of pioneering new formats for music that bridge the physical and digital, which include: a 3D theatre for the palm of your hand; a wearable record jacket – cut by Bowie/Hendrix’s tailor out of fabric woven with Wolfe’s music – and most recently an ‘anti-stream’ from the quietest room on earth. Wolfe is also the co-founder of a “profound” (The Times) research project looking at the power of music for people living with dementia