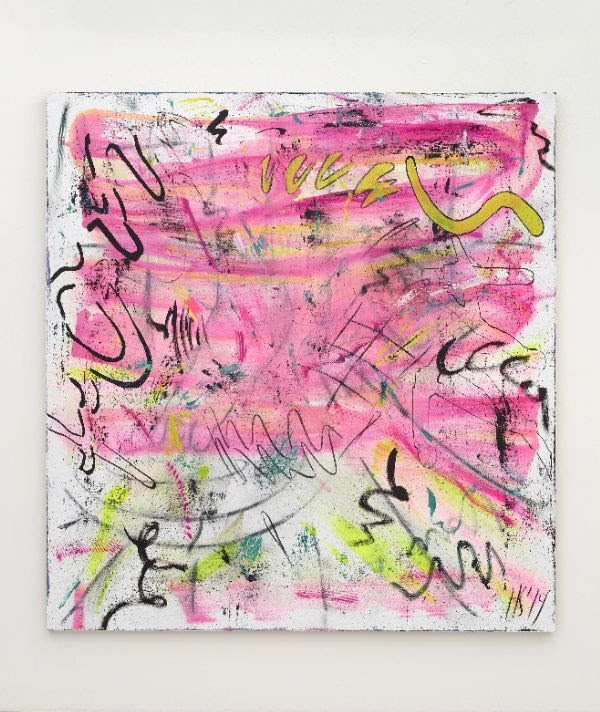 Strassburger (b.1983 Meissen, Germany) is an artist whose spontaneous aesthetic belies a meticulous and pre-planned practice. His visual language of expressive marks, strokes and recurring motifs appear gestural, but are on closer inspection predetermined. Seemingly unconstrained lines and splashes that don’t overlap but sit neatly in gaps on the canvas, thin, precisely placed brushstrokes: the shape and position of each form is carefully calculated construction. It is this disparity between image and perception, surface and reality that fascinates Strassburger.

The backdrop for the new paintings is a ‘wallpaper’ of photographs that originally featured celebrity couple Justin Bieber and Hayley Baldwin. Both subject to the invasive long lenses of the paparazzi and the objects of digital manipulation by high end fashion magazines, the couple are an example of the hype that surrounds individuals who are promoted like idols or products.

Strassburger lifted pictures of the couple from the internet and made a number of alterations in Photoshop; removing them from the frame and then reconstructing the missing elements to fill the voids. Enlarged and transposed to cover the walls of the gallery, the Lo-Fi reproduction of the bold colours and architectural elements in the photo-mural throw the paintings into sharp relief.

By using appropriated imagery Strassburger explores the relationship between mass media, pop culture and architecture. An age in which our digital selves are experienced by more people than our physical selves raises questions around identity and meaning. KARMA MANSION alludes to the effect that mass media has not just on image construction but also on our material space, blurring the lines between inside and outside, public and private.