In popular culture, the 27 Club refers to a group of legendary musicians who abused drugs and died at the age of 27. It includes Jimi Hendrix, Kurt Cobain, Jim Morrison, Amy Winehouse, and some other famous people. In fact, many talented actors and musicians became the victims of drug addiction involving the use of either prescription or illicit drugs or both. They are Elvis Presley, Prince, Marilyn Monroe, Whitney Houston, John Belushi. The list can go on and on.

Why do people of art rely on drugs? Do substances promote creativity? Or is this their resourcefulness that puts them at a higher risk of addiction?

Why do so many creative people take drugs?
As we can see, a lot of gifted individuals’ careers and lives were disrupted by substance abuse. Do you take drugs? Or do you know someone you think is using drugs? It may seem that you have control over the situation. In any case, call AddictionResource drug help hotline. A call to this service is toll-free and anonymous. And you’ll receive information on signs and symptoms of drug addiction, and get a list of several rehab numbers.

German scientists conducted a study on drug-related celebrity deaths between 1970 and 2015. The researchers identified 220 celebrities whose death is clearly associated with substance abuse. The average age at death was 38.6 years.

It tuned out that the number of celebs who died in the 21st century increased in comparison with the 20th
century. And the major reason may be the increased involvement of prescription opioids. In the study, two reasons for starting taking drugs are called:
1. To enhance performance – improve strength and endurance, cope with stress, control weight;
2. To deal with addiction – satisfy cravings and avoid the symptoms of withdrawal.

Famous people live and work under constant pressure. They are expected to be productive and healthy. So, they turn to marijuana, cocaine, ecstasy, LSD, and analgesics in order to meet the demands. For example, actors/actresses and comedians start using stimulants to feel more confident and sharp before a performance. Some actors use steroids to build muscles when preparing for a particular role. But with time, the use of this “enhancer” may develop into addiction and actually damage the career and health. Timely action in the form of calling an overdose hotline or rehab may save the life of an addict.

Is there a link between drug use and creativity?
The fact that many creative greats have been addicts generated a mistaken public belief that substance abuse boosts creativity. Really, there’s no evidence that proves that. However, there’s a link between addiction and factors that stimulate creativity. At least, that’s what neuroscientist David Linden writes in his book The Compass of Pleasure. 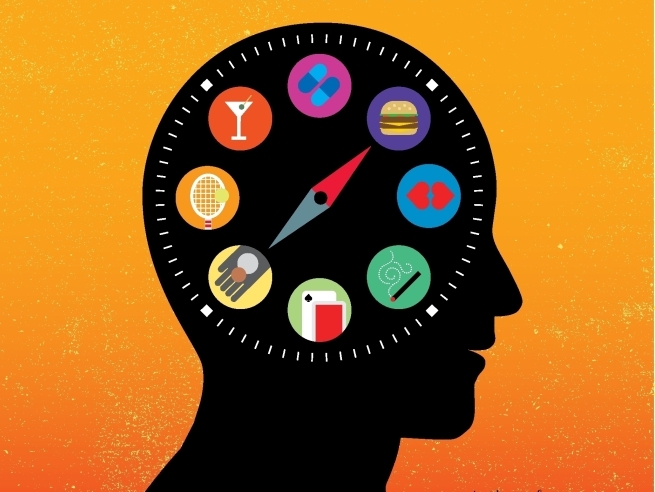 The Compass of Pleasure

The writer also states that individuals who possess such traits as impulsiveness, risk-taking, and novelty-
seeking are more prone to experiment with drugs. It’s interesting that these features of character contribute to creative abilities. Creative people have a different view of the world. This may relate to the way they treat rules and unacceptable behaviours.

Imaginative minds are considered to be more vulnerable and sensitive to stress and pain. Thus, they are more willing to seek unconventional ways to cope with negative emotions and feelings. Even in Ancient Greece, it was known that highly talented people experienced mental illnesses more often. Aristotle noted that “Those who have been eminent in philosophy, politics, poetry, and the arts have all had tendencies toward melancholia.” A decent amount of studies done with artistic people, particularly with writers, shows that a rate of depressive illness in these individuals is 80% higher than in the general population. Depressive moods often drive people to use illegal substances.

What are the dangers of drug use?
The negative effects of drug consumption depend on the type of drug and the way of usage. Common side-effects include:

• Constipation, cold sweats, itching
• Increased strain on the liver and kidney
• Irregular heart rate and high blood pressure
• Lung damage
• Nausea, vomiting, diarrhoea, and stomach pain, which can lead to changes in appetite and weight loss
• A weakened immune system
• Impotence
• Menstrual disorders
• Diseases such as hepatitis B or C, or HIV from needle-sharing
• Overdose and death.

What are the treatment options for creative people?
There’re some nuances in searching for a rehab for addicted artists, musicians, or writers. Famous people may want to avoid public attention. There’re private rehab facilities and luxury centres designed specifically for rich and wealthy people (not only from the entertainment industry but from business and politics) who value confidentiality. Some of these facilities are situated abroad.

It has been already mentioned that creative people are prone to mental illnesses. A lot of drug rehabs treat drug use disorder and co-occurring mental conditions. Use a national addiction hotline to get information on the best rehab centres of this type. It’s vital to address both problems at the same time, as pre-existing mental health problems often lead to relapses.

The choice of rehab may also depend on the preferable type of treatment program. Usually, treatment starts with detoxification which helps to remove toxic substances from the body. As for the therapy, different options are available. Cognitive-behavioural therapy is the most common. But family and couples therapies are becoming popular now.

Holistic rehab centres may be a good choice for ingenious people. They offer a variety of therapies: art therapy, acupuncture, equine therapy, adventure therapy, herbal therapy, and others. To get information on the local rehabs, or the type of facilities you prefer, use a drug question hotline. They will also help you understand if you or your close person are/is eligible for a certain type of rehab and consult you on paying details.

There’s no doubt that creative work is physically and emotionally draining. But it’s possible to succeed without putting your health and life at risk. They’re healthy and more effective ways to unleash your creativity, from a daily walk to travel, from reading to keeping a writing journal, you just need to find something that works for you.