Alison Jacques Gallery to present an exhibition of works by Betty Parsons (1900 – 1982), one of the most influential and dynamic figures of the American avant-garde. 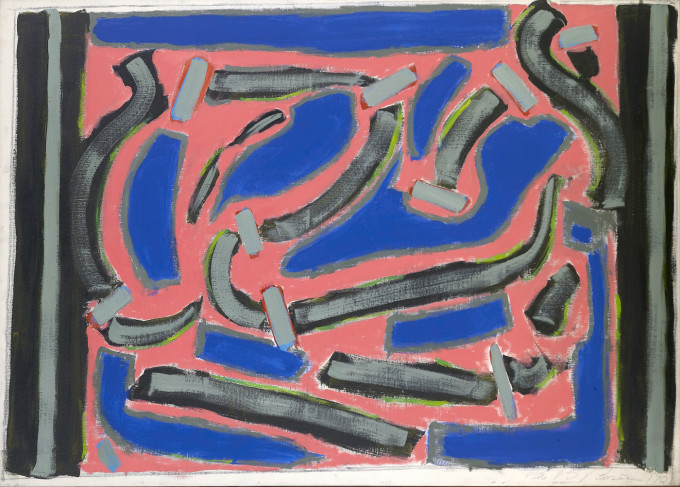 This will be the first show of the artist’s work to be held in London for nearly forty years and also marks the gallery’s
inaugural exhibition since announcing its representation of the Estate of Betty Parsons in 2018. The exhibition will offer
a deeper understanding of Parsons’ rigorous and experimental artistic practice which has, until recently, been little
explored.

The paintings and sculptures Parsons produced during her six-decade career centred on abstraction and drew on
diverse sources, from natural phenomena and the cosmos, to Native American culture and Asian spiritual practices.
Her extensive travels around the world, including trips to Africa, Japan and Mexico, were another notable stimulus for
her art.

Parsons’ contribution to post-war abstraction was unique; she developed a style that was playful, bold and expressive,
and always grounded by a flair for colour. The show will highlight her output during the 1960s and 1970s, with several
paintings from this key period being displayed alongside three important wood constructions, Block House (1970 –
1979), Sultan (1978) and African Village (1981).

Born into a prominent New York family, Parsons resolved to be an artist after visiting the groundbreaking Armory
Show in 1913 – an exhibition that is often credited with introducing Modern art to the United States. Following classes
at Parsons School of Design, her training evolved after relocating to Paris in 1923. During her decade in France she
studied alongside Alberto Giacometti at the Académie de la Grande Chaumière under the tutelage of Antoine Bourdelle,
and later found mentorship from Ossip Zadkine and Arthur Lindsey. Upon her return to America, she continued her
studies with Alexander Archipenko in Los Angeles before moving back to New York, where she was taught by Arshile
Gorky at the Grand Central School of Art.

After a decade of schooling, supported by an intensive studio practice, Parsons began to receive solo exhibitions at
the beginning of the 1930s. To supplement her income she took jobs assisting art dealers in Manhattan. This resulted
in Parsons being invited to run her own space. The launch of the Betty Parsons Gallery in September 1946 generated
important early exhibitions for Ad Reinhardt, Mark Rothko, Hans Hofmann, Clyfford Still and Jackson Pollock, at a
time when there was little interest in new American painting. Other artists whose careers Parsons is credited with
instigating over the course of the gallery’s thirty-six-year history include Hedda Sterne, Barnett Newman, Ellsworth
Kelly and Helen Frankenthaler.

Parsons continues to be best known for her pioneering gallery, which spearheaded the development of Abstract
Expressionism, enabling New York to overtake Paris as the centre of the art world. However, despite the great success
of this enterprise, she possessed an unwavering commitment to her artistic practice. “When I’m not at the gallery, my
own art is my relaxation,” she once said. “That’s my greatest joy.”

The artist’s painting practice significantly changed direction during this period. From 1947 she transitioned from
making representational, small-scale watercolours and oil works, to large, gestural, acrylic compositions. Similarly,
her motivation to create an image was replaced by a desire to capture a feeling. The impulse to evoke what she
described as the “sheer energy” of a situation would continue to frame her artistic ambitions until the end of her life.
The mid-1970s saw Parsons incorporate sculpture into her artistic practice. Inspired by the landscape surrounding her
Long Island studio, she would collect wooden flotsam found on the beach and transform these forgotten objects into
small constructions that can be likened to mementos, buildings and masks. Colour remains a vital component in the
sculptural works, often appearing as stripes of pure pigment.

Parsons’ skill for recognising talent and nurturing the careers of other artists often overtook the attention she sought
for her own art. Although acclaimed by leading critics from this era, such as Lawrence Alloway and Clement Greenberg,
Parsons was not able to supersede her powerful status as a gallerist. Her 1974 retrospective at Montclair Art Museum,
which followed the first international survey of her work at the Whitechapel Gallery in 1968, took the American media
by surprise as it was still not widely known that Parsons was a painter and sculptor. “I would give up my gallery in a
second if the world would accept me as an artist,” she is known to have remarked.
Regardless of this oversight, Parsons developed a penetrating and original take on abstraction that continues to form
a critical component of twentieth-century modernism.