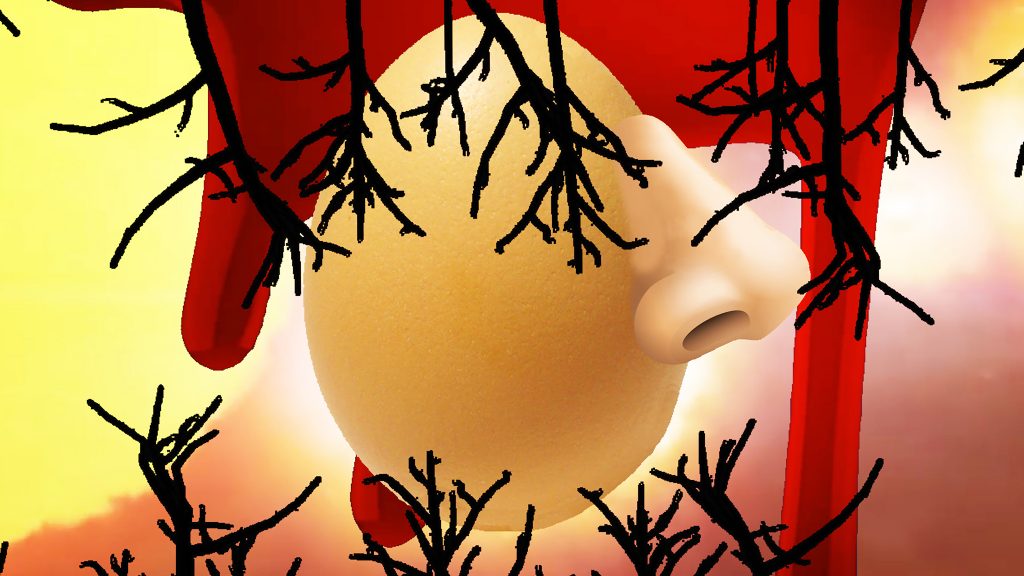 Wysing Arts Centre has announced an ambitious new exhibition to celebrate its 30th anniversary which opens this Saturday 6th July. Staged across Wysing’s 11-acre rural site, All His Ghosts Must Do My Bidding considers art as magic, artists as magicians, and the studio as a magical site.

The exhibition begins as an idealistic retelling of “The Sorcerer’s Apprentice”, the tale in which an
apprentice uses the master’s magic to cause chaos in the unattended studio, before being caught and punished. In a deliberate act of misreading, All His Ghosts… leaves the tale unfinished, reinterpreting the story as one of liberation. With the ‘forbidding’ master sorcerer gone, and the story’s moralising ending removed, the apprentice is free to experiment, to create and to fail without judgement.

Frozen at a moment of pure creative potential, when the apprentice finds them self in command of the master sorcerer’s ‘incantations…spells and gestures’, the focus of the story shifts. Now that experimentation, creativity and failure are permitted, the exhibition asks who gets to enjoy these freedoms? In other words, if no one is obliged to be the apprentice, who gets to be the sorcerer?

Overhead, Melika Ngombe Kolongo’s sonic sculpture acts as a first successful attempt at spell- casting and leads the way into the gallery where new ways of thinking are possible.

Inside, works from Anna Bunting-Branch, Jill McKnight, Tessa Norton, Harold Offeh, Laure Prouvost and Tai Shani perform a series of magical acts—transfiguration, enchantments, summoning and time travel—while asking who gets to hold and to use such magic. Taking the ‘his’ of the exhibition’s title as an explicit invitation for feminist and queer challenges, they present narratives of suppressed creativity and accounts of knowledge exchanged at society’s margins.

While the original “Sorcerer’s Apprentice” story ends by offering a paternalistic view on how magical
powers should be controlled, our re-telling expands outside of Wysing’s gallery and across the site
to offer a less rigid outline of what is at stake in wielding, bearing and transmitting these powers
responsibly. Shana Moulton, Imran Perretta, Pallavi Paul and Morgan Quaintance remind us of the risks if this magic is reclaimed from artists and misused, whether by advertising, the military, big pharma or government policy, while Heather Phillipson, Elizabeth Price and Tai Shani present different ways in which art can become a consciousness changing force, with the possibility to create a sanctuary or to act as an invocation against what Phillipson calls ‘the infinite patriarchal circle jerk.’

Phil Root’s Ten of Wands, 2011, is based on a figure of the same name from the Rider-Waite tarot cards, which show a person weighed down by their load but approaching their goal. Painted at Wysing, while on a year-long residency, the painting is here cast as the apprentice sorcerer, overburdened by repetitive and mundane tasks and longing for creative fulfilment. 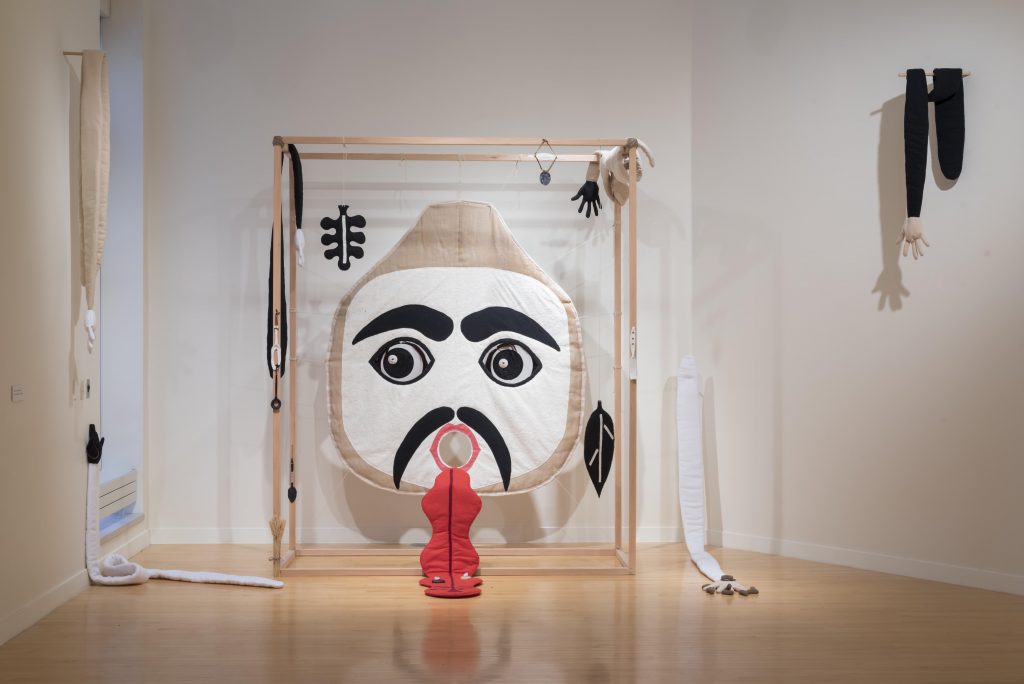 Jonathan Baldock’s installation Pa Ubu, 2015, is a large-scale puppet inspired by Alfred Jarry’s Ubu Roi, 1886 and the Jean-Christophe Averty film adaptation (1965). Based on the titular character, a despotic yet infantile ruler, Baldock’s creation looks out over the first room of the exhibition, absurd and intimidating in equal measure.

For this exhibition Olivier Castel has revisited a series of works originally proposed during his residency at Wysing in 2014. Conceived as interventions to the site, their ambition, scale and cost has prevented them from ever being realised. Presented as raw unused ideas on modest postcards, they are installed alongside other by-products of artistic production. In Shana Moulton’s video MindPlace ThoughtStream, 2014, Moulton’s anxious alter-ego Cynthia places an order for a MindPlace Thoughtstream Biofeedback System, a real-life product and precursor to today’s health apps and devices. Once plugged into the ‘personal relaxation system’, Cynthia embarks on a journey towards wellness that takes in whispering ASMR statues, psychedelic Activia adverts and TED talks.

Melika Ngombe Kolongo’s sound installation Resonance (forced vibrations), 2018, proposes rhythm, echo and melody as a medium for information exchange and a tool for alternative forms of thinking. Drawing on the use of sound in ritual and soundwaves in Bantu-Kongo cosmology, the work thinks about the possibilities of sound as a way to experience the world outside of language. Laure Prouvost’s Grandma’s Dream, 2013, was created as a companion piece to Wantee, 2016, Prouvost’s Turner-prize winning film about her eccentric conceptual artist grandfather. Composed of fanciful and fantastic imagery of a world where planes serve tea from the sky, where rooms are carpeted on every surface and where conceptual art takes care of dinner, Prouvost’s work places her grandmother’s imagination at centre stage. Suffused with as much sorrow as playfulness, Grandma’s Dream asks why only some of us get to play the artist. 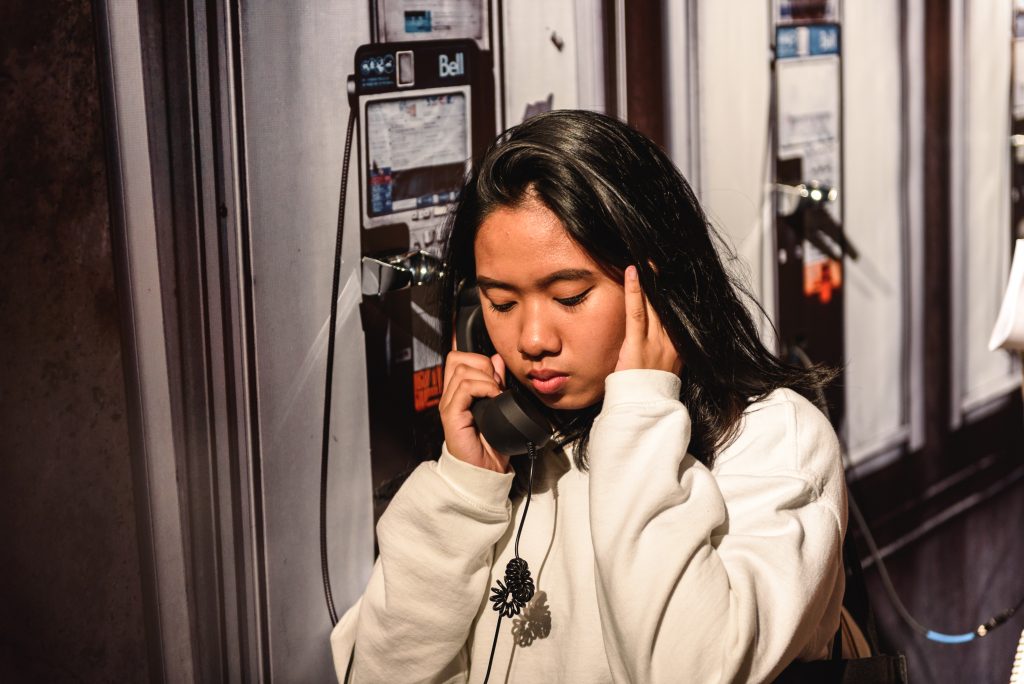 Harold Offeh presents Down at The Twilight Zone, 2019, an installation drawing together Offeh’s research into queer urban histories in Toronto, particularly in The ArQuives, Canada’s LGBTQ+ archives. Installed as a trompe l’oeil print, Offeh selects a series of interviews conducted in the 1980s by John Grube and Lionel Collier with Canadian gay men born in the first half of the Twentieth Century. Spanning a turbulent century for queer rights, Offeh proposes intergenerational listening as a political project.

A series of hand-painted posters from Anna Bunting-Branch’s W.I.T.C.H, 2016, project revisit an acronym that circulated among American socialist-feminist groups in the late 1960s. Aligning themselves with the figure of the witch ‘the original guerillas’**, the groups employed theatrical techniques and sought to situate the women’s liberation movement in a broader struggle of leftwing causes. Drawing on a range of sources including images and rhetoric from advertisements for ‘second wave’ feminist organising and protest posters, archival documents and motifs from science fiction texts, Bunting-Branch’s paintings interweave fact and fiction to proliferate new contemporary meanings and possibilities for ‘W.I.T.C.H.’.

The Fields Here Are Full of Ghosts, 2019, is a new experimental text from Tessa Norton, commissioned by Wysing and produced over a flexible multi-part residency in 2018. On becoming a parent in 2016, Norton felt as though she had experienced an irreparable rupture to time, but one that she was not keen to fix; attending the residencies with her family was a way to harness this strange energy. Norton’s publication talks about joy, grief, ghosts, pop music, potential, and the elasticity of time.

Tai Shani presents two works across the exhibition. Showings, 2018, in Wysing’s gallery, are a series of ambiguous models that Shani proposes as ‘spell books… maquettes for never closing, hedonistic nightclubs… archeological sites…airports for extra-terrestrials… [and] portals for ghosts to come into this world’. Among the miniature sculptures is a model of Julian of Norwich: a medieval mystic, who experienced a series of visions, or ‘shewings’, is the earliest known woman to write a book in the English language and who ended her life in permanent seclusion as an anchoress. An episode from Shani’s Turner-prize-nominated DC Semiramis series, Paradise, 2017, is installed in Folke Köbberling and Martin Kaltwasser’s Amphis, 2008, structure. Featuring a performance from a blood-spattered Maya Lubinsky and a score from artist Maxwell Sterling, Shani’s Promethean myth introduces us to Paradise, a figure formed by AI who mine human genomic data for trauma narratives. Stranded on a rock and eternally tormented, Paradise takes aim at her creators and those who ‘organised this violence’. 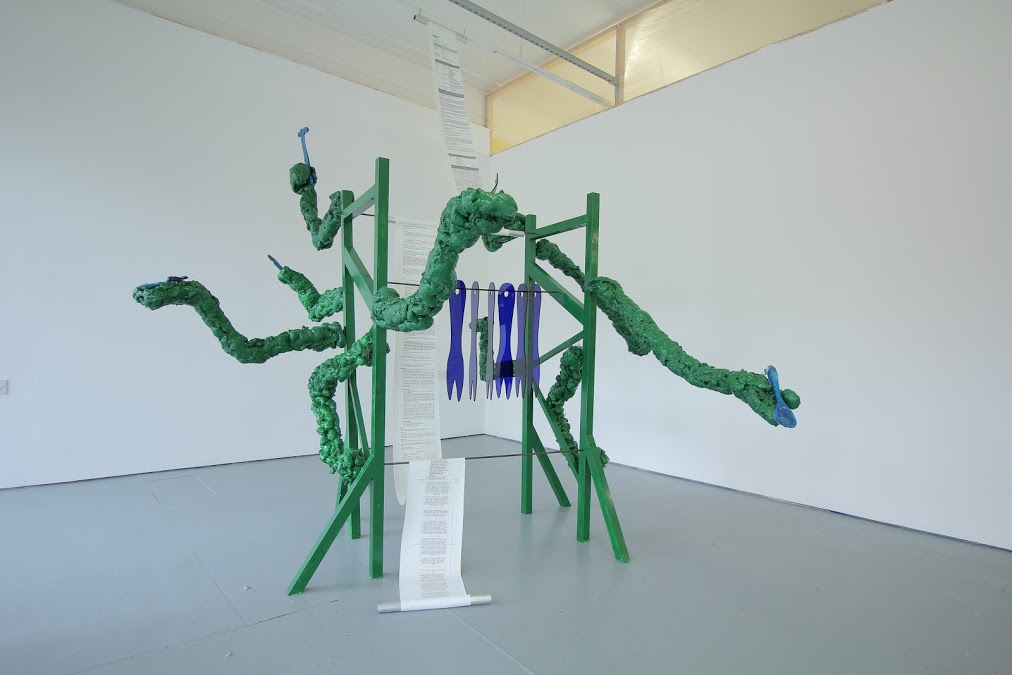 A new sculptural and sound installation from Jill McKnight investigates inherited ancestral wisdom, the elasticity of time and the archetypal roles that contemporary life pressures us into assuming. The centerpiece of the work is a new radio play, recorded in Wysing’s Polyphonic Recording Studio and consisting of four characters: The Artist, The Writer, The Administrator and The Mother. The first three of these are represented in large scale-sculptures in hessian, plaster and steel. For these works, McKnight was able to work with steel that had been bequeathed to Yorkshire Sculpture Park from sculptor Anthony Caro, who had in turn inherited it from the American sculptor David Smith.

Acts, incitements, etcetera, 2019, is a new video installation from Pallavi Paul drawing on her 2017 residency at Wysing and research into the Bletchley Park archive and the 1923 Official Secrets Act.
Composed of archival photographs, documents detailing the repercussions of spying operations and interviews with the women who worked at Bletchley Park, Britain’s central code-breaking site during World War II, Paul’s work asks what it means to hold a secret. Reflecting on the labour of code-breaking and its legacy beyond wartime as memories are suppressed, the work explores how people, as much as language itself, can become repositories for information. Acts, incitements, etcetera is installed on the boundary of Wysing’s site in an unused temporary structure.

The War on Terror, 2019, is a new sound installation by Imran Perretta commissioned for this exhibition and installed in the live room of Wysing’s Polyphonic Recording Studio. The commission takes the form of a ‘perpetual’ sound work, reconfiguring and reforming itself in real-time. It makes use of a sound effect known as the Shepard tone which gives the illusion of an infinitely ascending or descending tone and that is often used in war and action films to create tension. The work’s title references the asymmetric response to the September 11th attacks by the US and UK governments, whose rhetorical sleight of hand in declaring a ‘war’ enabled a strategy of violence and occupation that has drawn many parts of the world into a state of perpetual conflict.

Elizabeth Price’s HD video installation, THE TENT, 2012, takes a single book as its subject, source and starting point for its images and sound. Published by the Arts Council, Systems surveys the work of artists associated with the 1970s British Systems Group: reductive, predominantly abstract art generated using system theories. It features drawings, documentation and essays by each of the artists. Price’s work pores over these documents, focusing particularly on James Moyes’ Vibration Tent, 1972, an environment intended for the intense, reductive experience of extreme white light and white noise. The work derives a fictional narrative from the book as images become space and pages become physical structures. THE TENT proposes an ambiguous relationship with this previous generation of artists, showing the potential to find an ideological sanctuary in their theories and propositions, but also reminding us that it can be ‘taken down again’.

Heather Phillipson’s WHAT’S THE DAMAGE, 2017, is a proposition and provocation, answering back to ongoing crises under white patriarchy, relaying and augmenting feelings and gestures of chronic unease, protest and dissent. Phillipson’s summons and riposte are given vital form through representations of livid and enriched menstrual debris, rising up against leadership circle-jerks, over-groomed toupees, environmental catastrophes, weeping vortexes, seared orangutans, animal- fat banknotes, and advancing supermoons, pizzas and drones.

Missing Time, 2019, a new single-channel film work from Morgan Quaintance, commissioned for this exhibition occupies the Open Studio. The work draws on experiments and research from Quaintance’s 2017 residency at Wysing and responds to the themes of the exhibition.

All His Ghosts Must Do My Bidding An ambitious new exhibition celebrating the 30th Anniversary of Wysing Arts Centre 7th July to 25th August  www.wysingartscentre.org 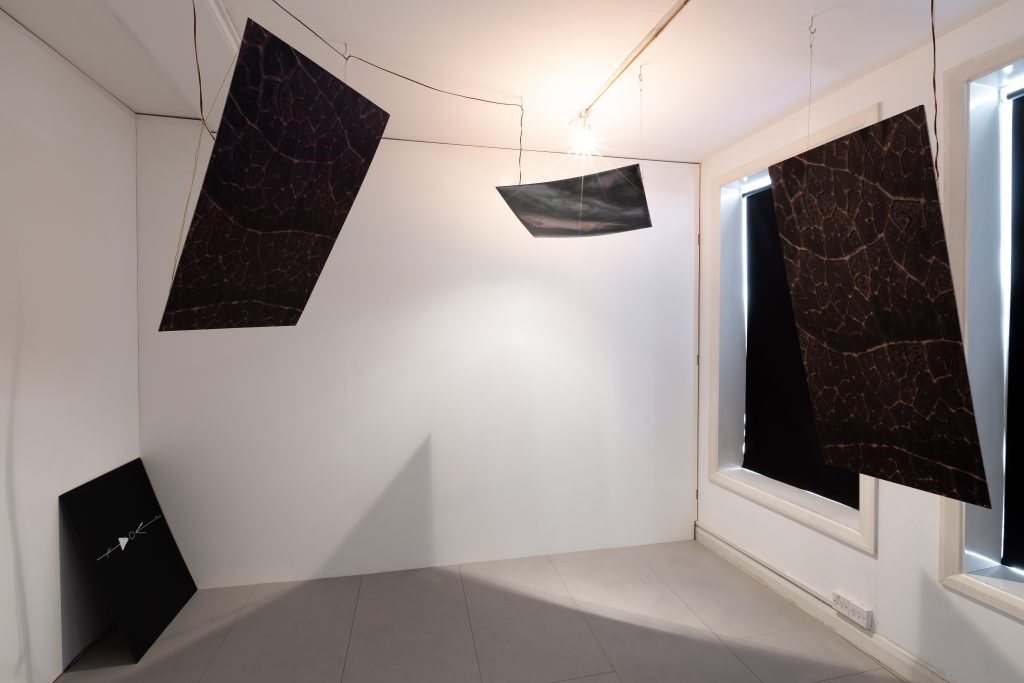