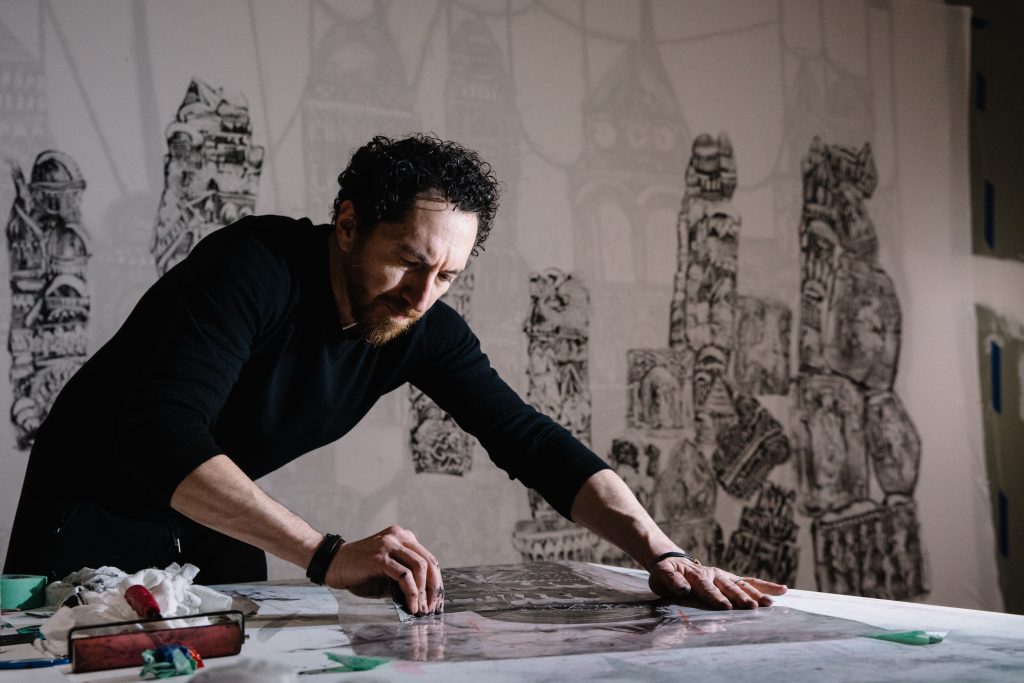 The Ismaili Centre, in partnership with the Aga Khan Museum, Toronto, is presenting Seeing Through Babel, a solo exhibition by the Syrian-Armenian artist Kevork Mourad.

In the Old Testament story of Babel, mankind is punished for attempting to construct a tower to heaven, an act of hubris that led God to create multiple languages so as to prevent such collisions happening again. For this exhibition, Mourad explores the story of Babel, using visual imagery as a means to connect people across the language divide.
Making artworks in public is an integral part of Mourad’s practice, and it is his hope that many people will visit the gallery as he creates his six-metre hanging sculpture, Seeing Through Babel, between now to 30th June. Mourad will also hold talks at 11.30am and at 2.30pm every day during this period. The work, which uses the artist’s trademark techniques – monotypes and drawing onto the surface of the work – is designed to allow visitors to walk in and around it, allowing closer consideration of its themes. 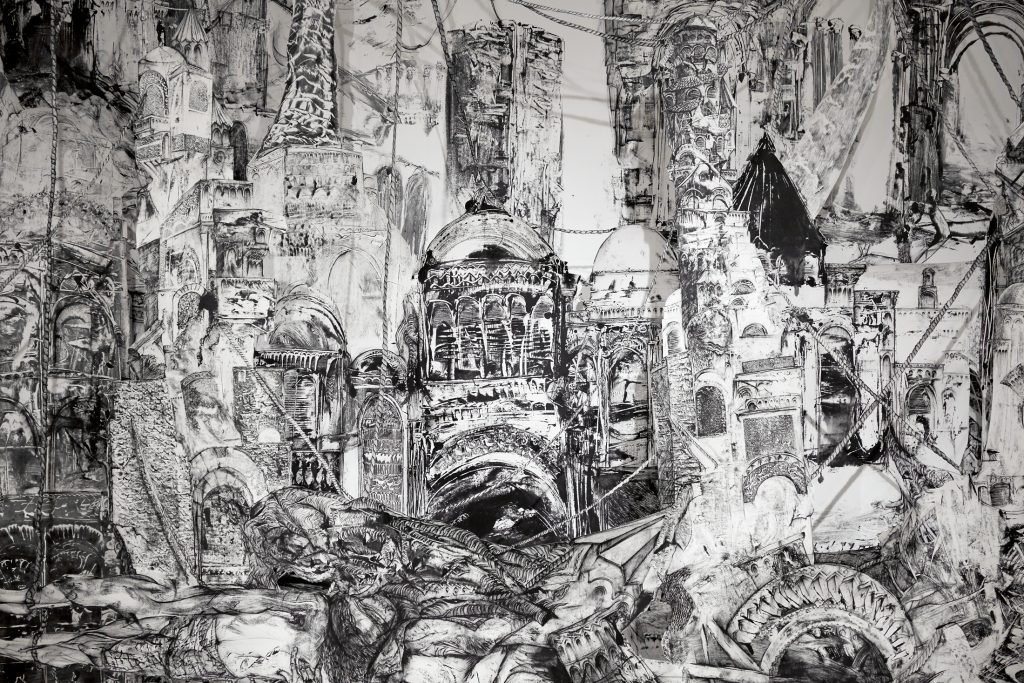 ‘I have often thought of this story, as it is said to be a moment that divided mankind. I see it as a moment when diversity was created.’ Describing his work, he points to how, through visual language, ‘it can connect people who speak different languages and come from different cultural backgrounds. Where Babel separated, visual art connects.’
Says Henry S. Kim, the Director and CEO of the Aga Khan Museum: ‘We are very pleased to be able to present an exhibition in London for the very first time and even more so that it is Kevork’s premiere in the city. He is an extraordinary artist who has developed a unique technique to tell stories visually.’

The exhibition is located in The Ismaili Centre’s Zamana Space, which reopens to the public with this exhibition. Liakat Hasham, President of the Shia Imami Ismaili Council for the United Kingdom, says:

‘The reopening of the Zamana Space after such a long hiatus is an important moment, as it offers the opportunity for The Ismaili Centre to contribute to the thriving arts corridor of Exhibition Road.’

The exhibition will launch on 1st July and the opening hours are Monday to Friday from 11am-6pm. The show is free to attend and booking is not required. A video documenting the creation of Seeing Through Babel will be shown during the show. In addition, visitors can also explore the world of jewellery, textiles and one of a kind objects for sale at the Centre inspired by the Collections at the Aga Khan Museum. 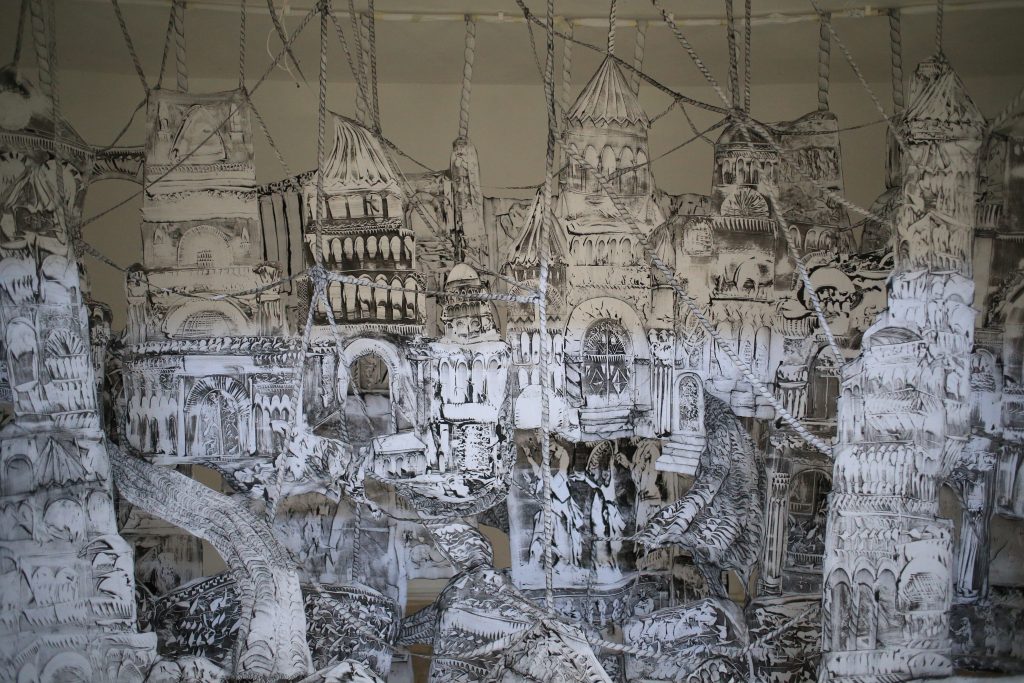 About the artist:
Kevork Mourad was born in 1970 in Qamishli, Syria. He grew up and studied in the city of Aleppo before moving to Armenia in 1992 where obtained his Masters of Fine Arts at the Yerevan Institute of Fine Arts. In 2001 he moved to the United States where he established his practice in New York City. Represented by Galerie Claude Lemand, he has exhibited at Galerie Tanit, Beirut, and the Rose Art Museum, Boston. A painter and video artist, he has performed his animated and live visuals around the world. A member of Yo-Yo Ma’s Silk Road Ensemble, he was featured in the documentary The Music of Strangers. His animated short lm, Four Arts for Syria, was funded by the Robert Bosch Stiftung Prize and premiered in the Stuttgart Animation Festival. He has performed at the Brooklyn Museum, Nara Museum in Japan, Art Institute of Chicago, American Museum of Natural History, Lincoln Center Atrium, Rhode Island School of Design, Harvard University, Rubin Museum, Tanglewood, Dutch Royal Palace for the Prince Claus Foundation, ElbPhilharmonie, and Walt Disney Concert Hall, in a commission of Handel’s Israel in Egypt by the LA Master Chorale, which was later performed by Master Voices in Carnegie Hall. In 2018 he was commissioned to create a full-length performance to accompany the Armenia! Exhibit by the Metropolitan Museum of Art. In 2019 he was in residence at the Aga Khan Museum, Toronto in a project entitled The Museum as Studio. kevorkmourad.com

About the Ismaili Centres:
The Ismaili Centres are symbolic markers of the permanent presence and core values of Ismaili communities around the world. Incorporating spaces for social and cultural gatherings, intellectual engagement and re ection, as well as spiritual contemplation, they are bridges of friendship and understanding, and serve to enhance relationships among faith communities, government and civil society. the.ismaili/ismailicentres/london

About the Ismaili Community:
The Shia Imami Ismaili Muslims – generally known as the Ismailis – are a community of ethnically and culturally diverse peoples living in over 25 countries, mainly in Central and South Asia, Africa, the Middle East, Europe, North America and Australia. They are united in their allegiance to His Highness the Aga Khan, the 49th hereditary Imam (spiritual leader) and direct descendant of Prophet Muhammad. the.ismaili

About the Aga Khan Museum:
The Aga Khan Museum in Toronto, Canada, has been established and developed by the Aga Khan Trust for Culture (AKTC), which is an agency of the Aga Khan Development Network (AKDN). The Museum’s mission is to foster a greater understanding and appreciation of the contribution that Muslim civilizations have made to world heritage while often reflecting, through both its permanent and temporary exhibitions, how cultures connect with one another. Designed by architect Fumihiko Maki, the Museum shares a 6.8-hectare site with Toronto’s Ismaili Centre, which was designed by architect Charles Correa. The surrounding landscaped park was designed by landscape architect Vladimir Djurovic. agakhanmuseum.org