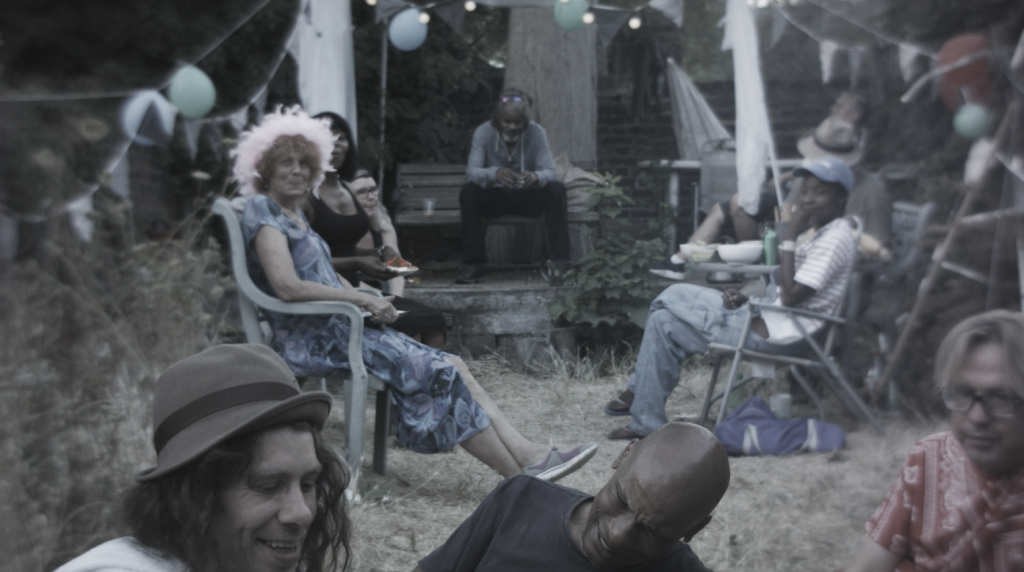 Filmmaker Andrea Luka Zimmerman and theatre director Adrian Jackson have joined forces to make a new feature film with a group of ten Londoners and a dog. Commissioned and produced by Artangel, preview screenings of Here for Life will take place from 11 – 20 June 2019 in an open-air cinema in Nomadic Community Gardens, the Shoreditch community space which forms the backdrop to the film. Produced and commissioned by Artangel with the support of the National Lottery through Arts Council England and Artangel’s Guardian Angels. It was selected through Open by Artangel and BBC Radio 4.

Here for Life follows the experiences of ten individuals living in London, whose lives have been shaped by loss and love, trauma and bravery, struggle and resistance. They dance together, steal together, eat together; agree and disagree, celebrate their differences and share their talents, grappling with a system that seems stacked against them. Their stories and performances become woven together, blurring the lines between fact and fiction through a series of intimate confessions, staged performances and journeys through London.

Eventually the cast meet on a makeshift stage in Nomadic Community Gardens, a unique community space between two train tracks on the fringes of the City of London. They spark a debate about the world in which we live, who has stolen what from whom, and how things might be fixed.

Here for Life will be presented at a series of outdoor screenings at sundown in Nomadic Gardens from 11 – 20 July. Each screening will be preceded by live performances.

Here for Life will have its official premiere and UK cinema release later this year.

Andrea Luka Zimmerman said: “We hope the audience will become part of the journey of the film, will be moved and challenged, recognising a shared humanity that understands suffering, endurance and resistance.”

Adrian Jackson said: “If this film tells us anything about London today, it’s that there are many unconsidered lives surviving against the odds. It feels important to tell these kinds of stories today – to hear from people who are often ‘othered’ in a variety of ways – to show a world we don’t see enough of.”

Michael Morris & James Lingwood, Co-Directors of Artangel, said: “Here for Life fuses fiction with documentary, conjuring up a world where difference makes no difference and hope is given a voice through trust.”

Tickets can be purchased here: eventbrite.co.uk/here-for-life

Adrian Jackson
Adrian Jackson is a theatre maker, playwright, teacher, translator and one of the world’s leading experts on the Theatre of the Oppressed. In 1991, he founded Cardboard Citizens, a theatre project that aims to change the lives of homeless people through the performing arts. He has directed over 50 plays with Cardboard Citizens, including Pericles (2003) and Timon (2006) with the Royal Shakespeare Company, The Beggar’s Opera (1999) with the English National Opera, Mincemeat (2009), winner of an Evening Standard Theatre Award and A Few Man Fridays (2012). Jackson had a long association with Augusto Boal – the Brazilian theatre maker, theorist and founder of the Theatre of the Oppressed – and has translated a number of Boal’s books into English. More recently, he directed Cathy, by Ali Taylor (2016/17), and, with Caitlin Mcleod, Home Truths, an Incomplete History of Housing Told in Nine Plays (2017).

Artangel
Artangel produces and presents extraordinary art in unexpected places in London, the UK, and beyond. For over 30 years, Artangel has generated some of the most talked-about art of recent times, including projects with Clio Barnard, Jeremy Deller, PJ Harvey, Roger Hiorns, Michael Landy, Steve McQueen and Rachel Whiteread. Recent works include Taryn Simon’s An Occupation of Loss, Evan Roth’s Red Lines and Heiner Goebbels’ Everything that happened and would happen. Appearing anywhere from empty prisons to underground vaults, daytime TV to the sky at night, Artangel produces art that surprises and inspires and wouldn’t be possible within the confines of a gallery.