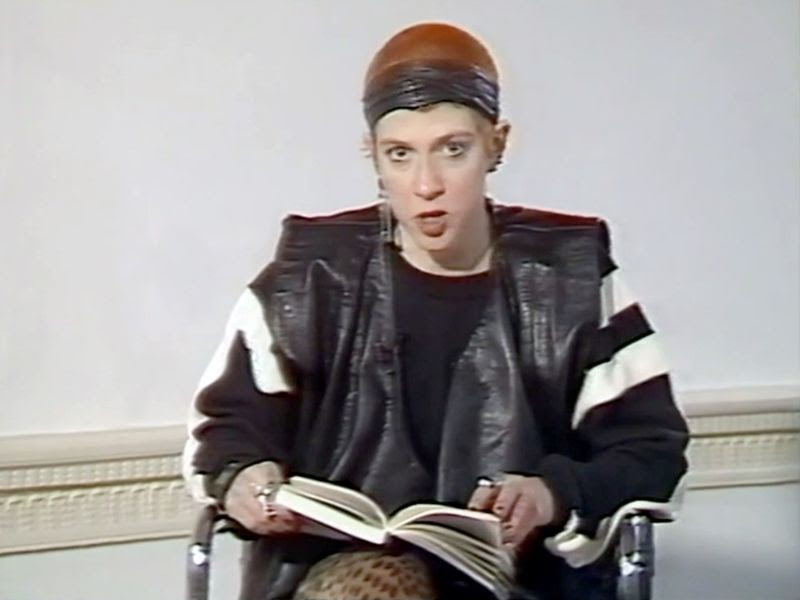 Kathy Acker in conversation with Angela McRobbie at the Institute of Contemporary Arts, 1987. Copyright ICA

The Institute of Contemporary Arts presents the first UK exhibition dedicated to the American writer Kathy Acker (1947–1997), and her written, spoken and performed work.

For a period during the 1980s when Acker lived in London, she was a regular presence in the ICA programme: holding conversations with other writers, giving readings, performing with musicians, and writing a script for the play Lulu Unchained, presented at the institute in 1985.

I, I, I, I, I, I, I, Kathy Acker addresses ‘Kathy Acker’ as a still-unfolding cultural force, focusing on the uniquely diverse and disruptive character of the author’s work and persona. This polyvocal and expansive project combines an exhibition with a programme of performances, screenings and talks. I, I, I, I, I, I, I, Kathy Acker presents key aspects of Acker’s work, while also highlighting her influence on artists and writers working today, particularly those occupying an area of contemporary practice that traverses the written and spoken word, performance and digital media, and who share deep connections to Acker’s methodologies and her politics of literature.

The exhibition spans the ICA’s Podium and Upper galleries and is structured around text fragments taken from a number of Acker’s novels, presented within a specific exhibition architecture. These texts serve as catalysts for a web of interconnected materials presented around them, including video and audio documentation of Acker’s performative appearances in various cultural and media contexts, documents from the writer’s archive, books from her personal library, and works by other artists and writers. This accumulation of materials provides insights into the intertextual nature of Acker’s work, and her central concerns with identity, sexual desire, mythology, piracy, and the language of the body. The exhibition also includes a timeline of Acker’s published texts, demonstrating the layered ways in which she approached the circulation of her work; at times self-publishing and self-distributing, as well as re-versioning texts as they appeared in different magazines and journals and as fragments within her novels.

A programme of performances, screenings and talks intertwined with the exhibition echoes Acker’s relationship to language, the voice and the body, and spans artistic and theoretical contributions. This programme includes newly commissioned performative and textual works from artists, writers and scholars, and the production of a play developed from Acker’s writing for the stage.

Acker is an exceptional figure in late-20th-century Western literature who moved between the avant-garde art and literary scenes of New York, San Diego, San Francisco, Paris and London. Her work traversed the intersections between conceptual art and poetry of the 1960s and 70s, the postmodernist linguistic deconstructions of the 1980s, and the nascent posthuman aesthetics of the 1990s. Through her prolific writing, Acker developed experimental textual methodologies as she distorted language, hybridised fiction and autobiography, introduced maps, drawings and diagrams, and ‘plagiarised’ the work of other authors.

For Acker, the use of the first-person singular was, in fact, plural, as she utilised the ‘I’ in her writing to inhabit different identities from her own life, fiction and history, acknowledging her complicated relationships with family, friends and lovers. From her first novels, which were episodically distributed by mail and written under the pseudonym ‘The Black Tarantula’, the performance of identity remained integral to Acker’s work. This performative relationship to the self was central to er creative strategies as she expanded her writing practice to include readings, performances, plays, screenplays, and collaborations with artists and musicians; fashioned a distinctive public image, captured by photographers including Robert Mapplethorpe, Jimmy DeSana, Michel Delsol and Jill Posener; and engaged ‘the language of the body’ through tattoos, piercings and body-building.

A fierce antagonism towards social conventions, gendered power, and imperialist capitalism is central to Acker’s texts, which have been labelled transgressive, and at various points censored and barred from distribution. Acker aligned herself with a conceptual tradition, yet her writing also sought to break down conventional distances between reader and text. Her depictions of the darkly complex relation between sexual desire and violence – as both a cultural subtext and present condition in Acker’s life – are as shocking and pertinent today as they were when first published. Reading Acker today also prompts challenging questions around Acker’s reproduction of racist and homophobic tropes and themes within Western culture, as both historically specific and persistent machines of violence.

For Acker, language was a site of contestation from which she constructed meaning and identity, and unpicked the patriarchal and the political. In her work, Acker provocatively confronted the strained relationship between desire and reality within culture, sex, the body, war, money, mythology, colonialism, sickness, and the city in ways that remain critically relevant to our current times. Acker’s work is a lens through which to interrogate the legacies and failings of late-20th-century Western avant-gardism. I, I, I, I, I, I, I, Kathy Acker seeks to illuminate the complexities within Acker’s written, spoken and performed work, as she moved between exposing and inhabiting the dynamics of power.