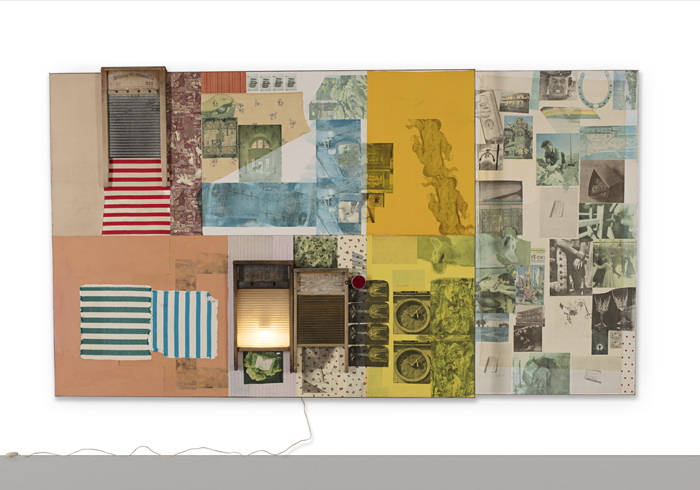 Galerie Thaddaeus Ropac London + the Robert Rauschenberg Foundation, presents the first UK exhibition dedicated to the American artist’s remarkable Spreads, a series that occupies an important position in his oeuvre. The large-scale Spreads (1975–83) encapsulate many of Robert Rauschenberg’s best-known motifs and materials. Twelve key works from the series?the largest of which stretches to over six metres wide?will go on view at Ropac’s London gallery from 28 November 2018. An integral series of paper collages from the same period will also be exhibited, incorporating fabrics and techniques that relate to the Spreads series.

One of the most influential artists of the post-war period, Rauschenberg revolutionised the picture plane with his hybrid painting-sculptures, created through the innovative inclusion of everyday objects?what he called “gifts from the street”. These Combines (1954–64) marked a watershed moment in the history of post-war art, rede ning and expanding the boundaries of what could be considered an artwork. It was in 1976, as the artist prepared for an important mid-career retrospective, that Rauschenberg found inspiration for his new Spreads series. The exhibition, which opened at the National Collection of Fine Arts (now Smithsonian American Art Museum) in Washington, D.C., o ered Rauschenberg the opportunity to revisit works he had not seen for up to 25 years, prompting what he described as “autobiographical feelings”, and imparting a retrospective aspect to his new works.

In these Spreads, “classic Rauschenberg” motifs from his object-laden Combines resurfaced, including tyres, doors, bedding, ironing boards, mirrors, electric lights, ventilators, metal traps, images of exotic animals, bird wings, umbrellas and parachutes that recalled those in his acclaimed 1963 performance piece Pelican. Yet these fulcrum works were also informed by the materials and images of his silken Jammers (1975–76) and solvent- transfer Hoarfrosts (1974–76), whilst pre guring his later metal works from the 1980s–90s, such as the Shiners (1986–93), Urban Bourbons (1988–96) and Borealis (1988–92).

“Rauschenberg is a painter of history?the history of now rather than then”

Rather than a purely retrospective exercise, the development of his Spreads is also suggestive of a more complex relationship between past and present, integrating not only elements from his earlier work but also re ecting changes in his life, his practice and in contemporary art at the time. Rauschenberg’s use of fabric colour blocks in his Spreads not only represented a shift in his colour palette from the urban experience of New York to the bright oranges, pinks and yellows of life in Florida, but also engaged with recent artistic developments such as Colour Field painting and Minimalism, incorporating references to a new generation of artists.

In the works directly preceding the Spreads, particularly his Cardboards (1971–72) and fabric Jammers, Rauschenberg had eliminated imagery in favour of a sparser visual language focused on materials. After the relative minimalism of these series, the excesses of the Spreads marked a triumphant return to imagery. “In recent years this artist has left everything out, the Jammers being the prime example,” wrote critic William Zimmer of the Spreads exhibition at Leo Castelli Gallery in 1976. “Rauschenberg has put everything in again. Replacing the raucous gestural passages that mark his early work are tighter passages [. . .]

Although there is once again a lot going on, it is cleaner. The whole earth catalogue, from arcane imagery to very public signs, is back and actual pendant objects reappear?a rubber raft, chairs, tyres, electric lights.” The pendant objects that appear in the works on view include lightbulbs, umbrellas, mirrors, a metal bucket, split tyre, and even an oar. These are a xed to wooden panels and collaged with fabric scraps and solvent transferred media images drawn from contemporary newspapers and magazines.

Asked about his use of the term “Spread”, Rauschenberg responded that it meant “as far as I can make it stretch, and land (like a farmer’s ‘spread’), and also the stu you put on toast”. This term also clearly refers to the scale of the works, with their large, fabric-covered supports that stretch across the wall. The rst work in the series, Yule 75, was created in December 1975 and cut into 56 irregular pieces that Rauschenberg distributed to his friends as Christmas gifts. Another of the earliest, Rodeo Palace (1976) was commissioned for the exhibition The Great American Rodeo at the Fort Worth Art Museum, and later included in Rauschenberg’s 1976 retrospective. The same expansiveness and breadth of vision characterises the works included in this exhibition, with the largest work, Half a Grandstand (1978), stretching to over six metres.

“The word that best defines Robert Rauschenberg’s achievements as a painter, printmaker, photographer, sculptor, theatre designer, performance artist, and technologist is ‘epic.’ According to my dictionary, it means ‘heroic and impressive in quality’ and ‘surpassing the usual or ordinary in scope or size.’”

The American artist Robert Rauschenberg (1925–2008) memorably claimed that “Painting relates to both art and life. Neither can be made. (I try to act in that gap between the two.)” Over the course of his sixty-year career, his work was inspired by wide-ranging experiences, collaborations, and a spirit of experimentation with new materials and techniques. Although he demurred a liation with any specific movement, he has been identi ed as a forerunner of practically every post-war artistic development since Abstract Expressionism.

Rauschenberg attended the Kansas City Art Institute and later the Académie Julian in Paris, but the young artist’s most profound formative experience was at the experimental Black Mountain College in North Carolina, where he enrolled in 1948 alongside fellow artist and future wife Susan Weil. There he studied under painter and Bauhaus educator Josef Albers and met composer John Cage and choreographer Merce Cunningham, who became longstanding friends and artistic collaborators. The trio participated in Theatre Piece #1 (1952), a multimedia performance?now recognised as the rst “Happening”?that incorporated poetry, music, dance and lm, as well as Rauschenberg’s White Paintings (1951) suspended from the ceiling. Cage memorably described the White Paintings as “airports for the lights, shadows and particles” that “caught whatever fell on them”, citing them as an inspiration for his composition 4’33” (1952), which creates a framework that prompts a heightened awareness of ambient sound.

By the end of 1953, Rauschenberg had begun integrating a litany of found materials and objects into his Red Paintings (1953–54), which evolved into his seminal Combines. Incorporating everything from a taxidermy goat to street signs and bed quilts, these works obliterated the boundary between painting and sculpture, introducing a new relationship between viewer and artwork. In 1962 Rauschenberg began making paintings that combined gestural brushwork with silkscreened imagery drawn from newspapers, magazines and his own photographs. Following his rst retrospective, organised by the Jewish Museum, New York in 1963, Rauschenberg was awarded the International Grand Prize in Painting at the Venice Biennale in 1964.

Rauschenberg’s work throughout the subsequent decades embodied his lifelong commitment to collaboration with performers, artisans and engineers worldwide. As well as designing lighting, sets and costumes for avant-garde productions by Merce Cunningham, Trisha Brown and Paul Taylor, among others, Rauschenberg also choreographed his own performances, beginning with Pelican in 1963. He co-founded Experiments in Art and Technology (E.A.T.) with engineer Billy Klüver, which aimed to pair artists and engineers for collaborative projects. Together with Klüver, Rauschenberg created works like Oracle (1962–65), which incorporated wireless transistor radio technology, and the responsive light installation Soundings (1968).

In 1970, Rauschenberg established his permanent home in Captiva Island, Florida, where he created several series of works focused on materiality, including the Cardboards, wall sculptures created from discarded boxes, and the silken Jammers. His experimentation with printing techniques also continued across a range of media, including the fabric solvent-transfer Hoarfrosts, multimedia Spreads and his metal works from the 1980s–90s, including the Shiners, Urban Bourbons and Borealis. In addition to his own artmaking practice, Rauschenberg became a spokesperson for artists and the creative community at large. In September 1970, he founded Change, Inc., a non-pro t organisation that helped artists with emergency expenses and from 1984–91, he personally funded the Rauschenberg Overseas Culture Interchange (ROCI). For this extensive touring program, Rauschenberg travelled to ten countries – Mexico, Chile, Venezuela, China, Tibet, Japan, Cuba, the USSR, Germany and Malaysia?with the aim of sparking cross-cultural dialogue and understanding through the creative process.