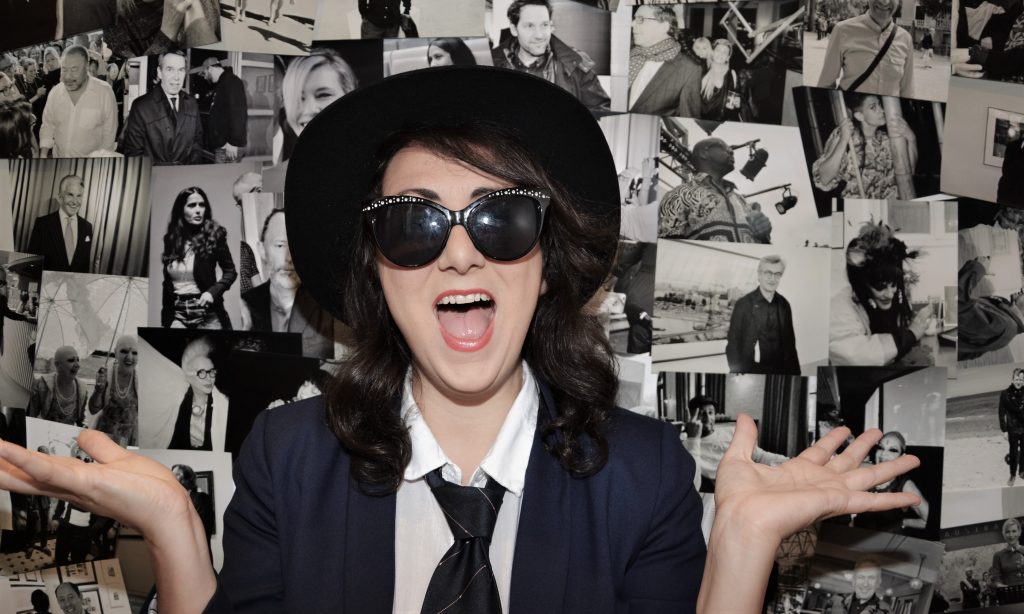 We caught up with the larger than life journo Nadja Sayej talk to her about her awesome new book “Biennale Bitch: Adventures of an Arts Reporter,” .

So what is the book about?

The book is about running around biennales and writing about all the other stuff that happens besides the art. Sure, we read reports about the art at biennales or well-polished politically-savvy, often dry quotes from curators, but what about the afterparty? Imagine Studio 54 style photography with snippets of conversation overheard in a taxi mixed with anecdotes, jokes and paragraphs that start with sentences like: “Wait: It gets weirder…”

You can get the print version of Biennale Bitch from Blurb.com or the ebook from ArtStars* Books. Easy as pie! Or DM me on Instagram for a signed copy and a handwritten envelope by yours truly!

Good question! I felt I needed an even number after releasing my other book, The Celebrity Interview Book, which features 21 Q&As (from Jean Paul Gaultier to Susan Sarandon), so this time around, I rounded it up to 30 short stories; all of which are first-person, weird, Gonzo journalism takes on the art world – because let’s face it, many people in contemporary art take themselves very seriously. In one story, I sat down with Salma Hayek to talk about performance art, in another, I’m brushing shoulders with Cate Blanchett. It’s all relative in showbiz, baby!

Do you have a favourite story?

There are so many, it’s hard to say, but bumping into Brad Pitt in a parking lot in Kassel during Documenta was awesome, but so was meeting Jane Newton, aka Alice Springs, aka the widow of Helmut Newton. But obviously, I’m obsessed with photography. There’s also a chapter of non-biennale run ins, like the Ivanka Trump protest party in Berlin which turned into a street techno party, or that time I called Patton Oswalt from a hotel room in Marrakech. He gave me the title of my future memoirs as am arts reporter: “My life in past appetizers.”

Who was the nicest celebrity you met?

I would say Salma Hayek, but that’s because I was worried she would be guarded or hard to connect with because she’s so rich, she is married into the Pinault family. But I was totally wrong! She was easy to connect with, kicked off her heels and gushed over Hans Ulrich Obrist, who she thinks is a genius. The same with Anish Kapoor, a very gentle person who is in fact, totally unpretentious. But his poetic nature you’d find in his work truly comes out in his personality (but with more of a sense of humor). I remember meeting him in Moscow and saying “You have to see the black square by Malevich in this museum, you’re gonna die,” and he said “Don’t say that! I don’t want to die!” 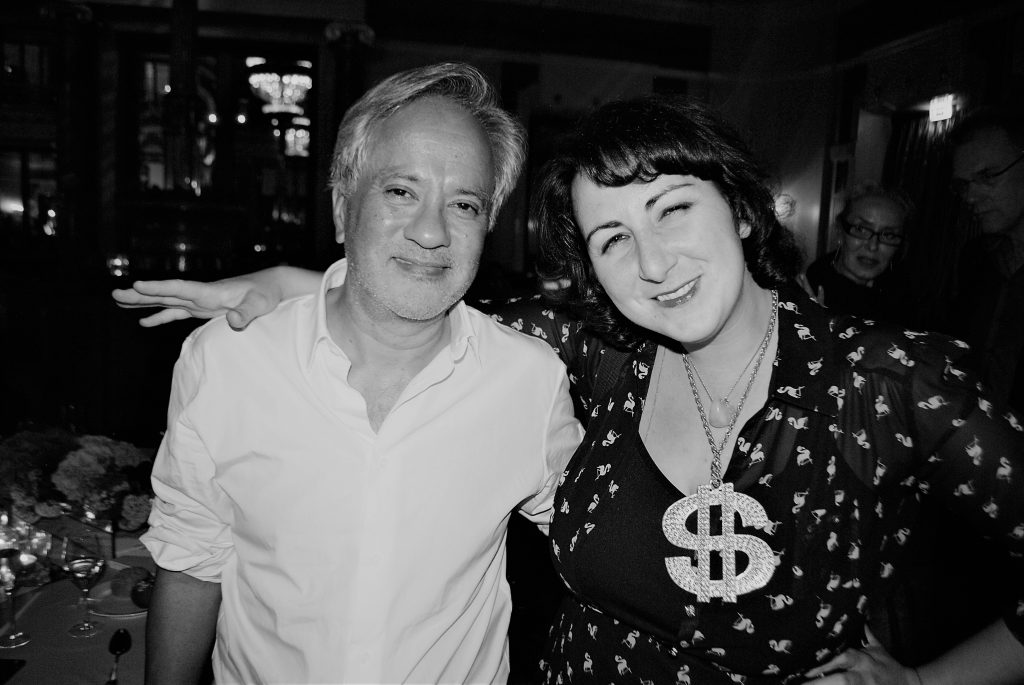 Who was the nastiest?

She isn’t in the book but I’d say Yoko Ono was the most distant and hard to connect with. But as far as people in the book who were kind of off, I’d say the Queen of Norway, just because I sensed that she wasn’t a fan of H.R. Giger, who showed his glastly (in a good way) Aliens-inspired furniture at the Nordic Biennale. I can’t understand people who expect art to be pleasant all the time. Art is supposed to show us the underbelly of the world, and ask tough questions.

Is the art world heading for a crash?

Nah, it’s heading for a renaissance! The more comedy can become a part of the art world, the more memeable it will become and the more the mainstream public can get into it. And that whole idea of having a PhD and the ivory tower is dust, like the history books! That leads to a greater audience the art world will have, making it less stuffy, pretentious and elitist, and far more accessible. That’s what I hope my books do, because if you’re not afraid to become part of the conversation, that will encourage others to do the same! Go ahead, fuck up, make mistakes, say things you’re not supposed to. Then learn from it! That’s why I’m not against celebrities in the art world at all, it’s not a cheap publicity schtick. If it draws some of a film star’s fanbase to an art fair or a biennale, I say that’s great. Most people don’t even know what an art fair is. Try explaining what a biennale is to your aunts and uncles over Christmas dinner? Now that’s comedy (read chapter 13 to hear my version). Look at the recent Banksy prank at Sotheby’s, that was genius, but it should have happened 30 years ago. If it did, we’d be in a different place than we are right now. Not everything is funny though, if the art world had more of a conversation, the Guerrilla Girls wouldn’t have to teach museums how to write wall labels about sexual predators.

Have you learnt anything important hanging around artworld people?

Probably that I’ll always be an outsider because I’m not willing to kiss everyone’s ass. But then again, I’m not an art collector, so why would anyone kiss my ass? It’s a joke. But I also learned that the people who show up at biennales for power networking sessions will be gravely disappointed. The art world is a place that slow cooks careers and connections. As John Waters told me: “If you get accepted too early, it’s not good. Probably the work isn’t great. If, in the start of your career, you are immediately embraced, something is generally wrong.”

I’m having a photo exhibition of my celebrity photos in Paris and releasing my next book (you guessed it!) Celebrity Photographs, not to mention my other book of unedited celebrity Q&As called “I Just Got Off the Phone With…” which is my life as an artist and celebrity interviewer, more or less. Then I’m going home for Christmas to visit my Scottish mum. Then I’ll be checking up on everyone’s Christmas list of goals to make sure you make a damn fine list of New Years Resolutions! I totally want a selfie with Damien Hirst. I’m Canadian but no apologies there! 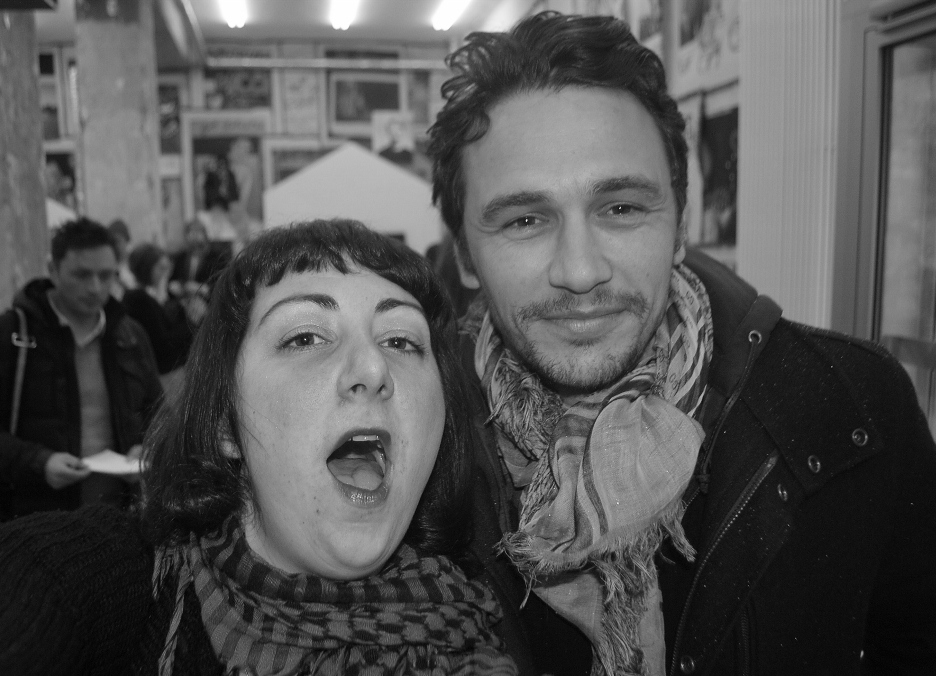 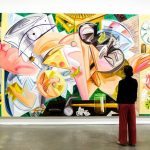 The rise in art protests: how the gallery became a new battleground

An exhibit by controversial artist Dana Schultz, accused of profiting from black pain, has led to anger, the latest in an increasingly long line of art world protests 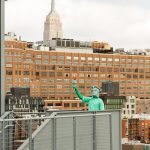 A particularly biting set of pieces, including a Statue of Liberty holding up an unlit torch, help to symbolize an arts community raging against the president 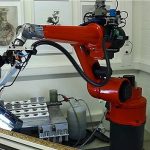 Vincent van Bot: the robots turning their hand to art