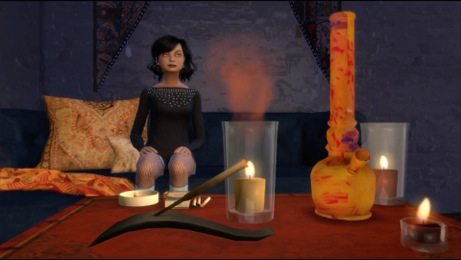 1. What will you be showing at Strangelove Festival in March?
I am showing Anhedonia and Anorexia, two chapters from Anhedonia (2017), a film in six parts that was commissioned by Daata Editions.

2. What mediums do you work with?
I create machinima (machine-cinema) films inside of pre-existing computer games such as The Sims. I use the software for my own virtual film production and then edit the footage into cinematic narratives.

3. How do you know when you have completed a work?
Once I have a rough cut, I create an export and watch the film over and over again, writing down any moments that feel out of place. When I have watched the film through and cannot find any more of these moments, I consider the work finished.

Anhedonia by Jacky Connolly (trailer) from Daata Editions on Vimeo.

4. How important is the presentation of your work and viewer engagement?
I am happy with the work being viewed both in its native computer environment or in a more formal presentation, such as a theater projection or a large monitor. Either way, there is something captivating about the avatars’ movements that seems to draw in viewers.

5. If you could choose to show your artwork in a non traditional art setting, where would that be?
I would like to screen my work on a video billboard, preferably on a remote country highway surrounded by trees and mountains.

6. With the increasing evolution of technology, where do you see film in the next ten years?
The other night I played the new Resident Evil survival horror game on the Playstation 4. There is a sequence where you find a videotape in the game and insert it into a VCR. Survival horror games have always been cinematic, like “playing” a movie, but in this game you can control your avatar inside of the videotape sequence, or essentially experience the memory/flashback/video evidence in the first-person perspective. I look forward to seeing how these forms of cinematic experience will develop in the coming decade.

7. If you could create a time based arts compilation, what would be on it?
A few favorite film & video artists I would like to include would be: Peggy Ahwesh, Stan Douglas, Lillian Schwartz, Dara Birnbaum, Chantal Ackerman, Peter Greenaway, David Lynch.

A Goth Life — is a selection of artist works that compiled together make a composite tale of our joyously souless, self-reflective, insular, tension and angst ridden times. The use of the internet is our guide, confidente, entertainment, mirror, window, general outlet and has created a real alternative social reality, with artists commentating on and providing a contemporary anthropology for this coming of age.