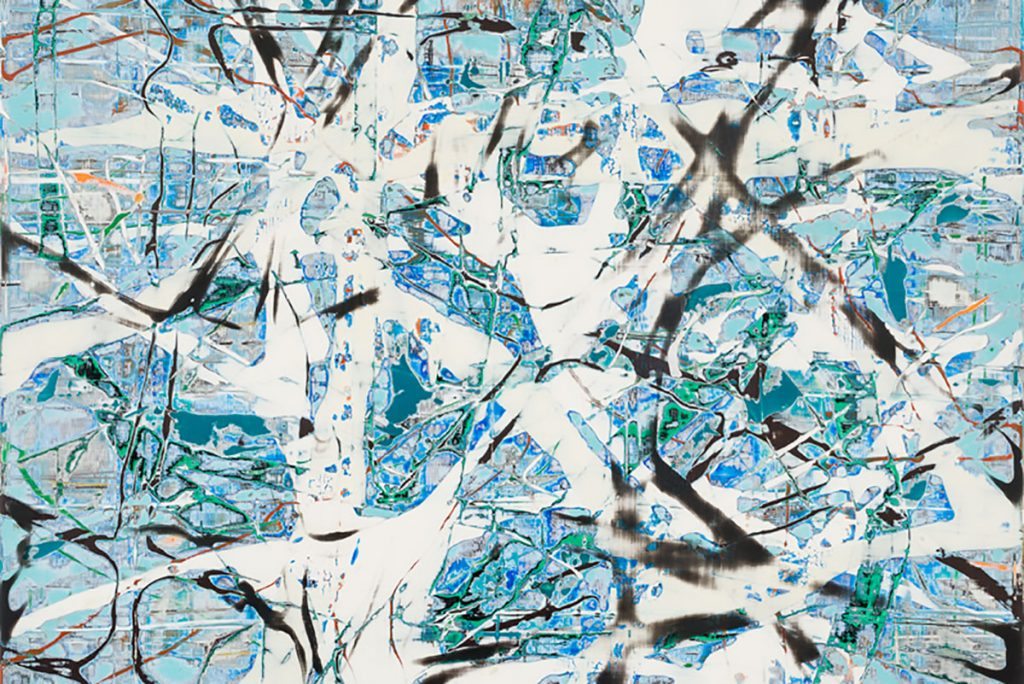 Inspired by landscapes where nature collides with the urban world, my paintings are constructed, layer by layer, over a period of several months.

I build up a densely worked ‘block’ of colour, texture and form, layering oil- and water-based paints, and allowing the volatile relationship between these two substances to create unpredictable and dynamic surfaces, each of which influences the way that the next will react.

The narrow strand of Epping Forest that borders my home and studio is a constant source of inspiration, and many paintings begin with a drawing made from this landscape. This drawing functions as the initial prompt in the painting’s development, and begins the story of each piece.

The addition of paint and texture is just the start of the process, however, as the final composition is only revealed once I have pared down this built-up surface in order to expose a completed image.

As the layers are stripped away, the ‘skeleton’ of the piece begins to re-emerge. The network of lines and strata become increasingly interwoven and intricate as this process continues, affording each work its own history and identity.

An element of chance plays its part in the success or failure of my paintings; long-hidden motifs emerge slowly, and unpredictably, through the excavation of paint. This is also when the conflict between oil- and water-based substances can take effect, as sections of unstable pigment pucker, contort and sometimes peel away entirely as the violent process of removing up to 30 layers of paint continues.

This is when the method of making these works resembles sculpture or carving more than painting. It is also when the weeks or months of accumulated paint will either coalesce to form a finished work of art, or disappear completely, to be started again from scratch.

Matthew has been producing work in his East London studio for more than 20 years, exhibiting his paintings throughout the UK and in the United States.

A prize-winner at the Creekside Open in 2015, Matthew was shortlisted for the Royal Academy Summer Exhibition in 2016.