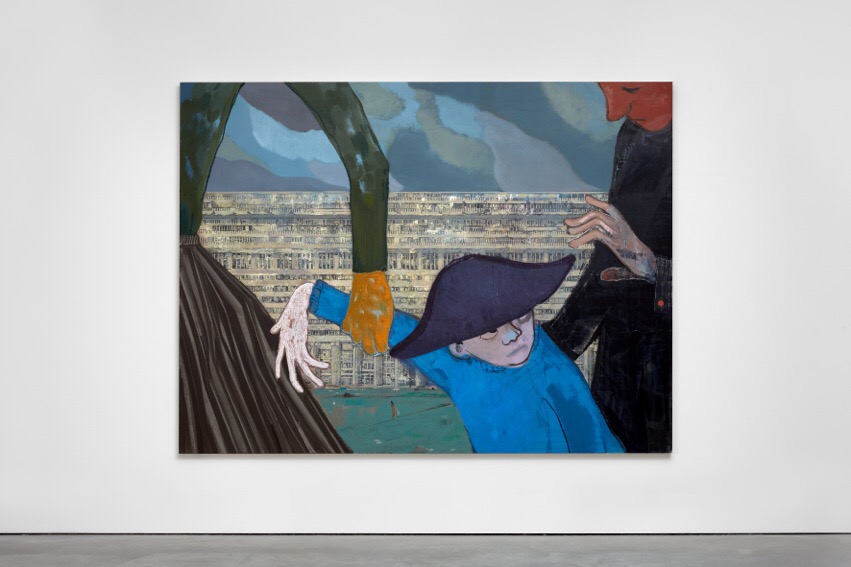 About the artist
Sanya Kantarovsky was born in Moscow in 1982. He lives and works in New York. Kantarovsky completed MFA at the University of California in 2011, and BFA at Rhode Island School of Art & Design in 2004. Recent solo exhibitions include ‘Apricot Juice’, with Ieva Misevi?i?t?, at Studio Voltaire, London (2015), ‘Happy Soul’ at LAXART, Los Angeles (2014), ‘Little Vera’, in collaboration with Ella Kruglyanskaya, at KIM? Contemporary Art Centre, Riga (2014), and ‘You are Not an Evening’ at Gesellschaft für Aktuelle Kunst (GAK), Bremen (2013). His work has recently been included in exhibitions at Sculpture Center, New York, White Flag Projects, St Louis, Badischer Kunstverein, Karlsruhe, and the Moscow Museum of Modern Art, Moscow.Sanya Kantarovsky Feral Neighbours 4 October – 5 November

The artist’s first monograph, ‘NO JOKE’, is published by Koenig Books and Studio Voltaire, London, this October. The book brings together works from the past six years with contributions from Eli Diner, Allison Katz, and Angie Keefer. ISBN: 978-3-86335-956-0 Please contact Modern Art for further information.

Feral Painting Full of Feral Neighbours
There is an apartment building in Moscow that is a quarter of a mile long, 16 stories high, with shops on its first floor and an underground train station below. We see it hulking behind a trio of figures in the painting Kompleks. People call this building the House Ship. Its facade is pocked with air conditioning units and satellite dishes. I’d guess that at least 2,000 people live there. The House Ship could be permeated by the deferential sense of order that settles over some apartment buildings – a veneer of personable disinterest that is a necessity if its occupants want the illusion of privacy. One lets their neighbours be blank and hopes that they return the favour. One also forgets that there are pipes and wiring that run through all of its walls. Our construction of privacy has become a slippery thing. Steadfast insistence on it occasionally loses its footing while wading through the permissible voyeurism and well manicured exhibitionism that define so much of our existence now. Part of our lax attitude about sharing so much – of story-ifying our daily lives, all the way down to spinning shameful moments into comedy – is that our audience has effectively sought us out and that most of them are sharing with us too. Someone was taking a shower when the water suddenly slowed to a trickle, and in the shivering quiet they could hear their neighbor doing their dishes. We’re not meant to see what is happening in these paintings. We’re not their audience, and probably no one is. Yet, here we are looking at them, and, honestly, how could we have forgotten that these scenes exist? Exhibitionism and doubt, self-aggrandisement and inadequacy, neediness and coercion; the carefully maintained division between what we share and what we desperately want to keep to ourselves collapses into a reckoning of our ideals versus our neurosis. Someone else was leaving their apartment and a neighbour caught sight of the chaotic mess they live in before they could manage to get the door closed. It was hard to tell if her gaze was admonishing or encouraging. In this body of paintings, pentimenti becomes the stuff of previous selves – the dashed home repairs and literally old coats of paint. Quickly sketched watercolour has the feeling of an analyst’s hastily written notes about a patient’s dreams. And those figures that solemnly stare back seem to ask if we’ve seen enough yet. Spammed by the presence of unwanted attention and contaminated by so many efforts at self-help, these paintings are tentatively at their best, but glimpses of their concealed embarrassments still proudly shine through. They have thumbed through the feeds of history and picked up a few things, but like a plum gone rotten or a bruise just getting ripe, blemished reality beats out the wishful construction of it. Rather than merely rifling through the conventions of a medium that prizes conviction, these works lay bare the actual, doubt-riddled foundation of an impulse made real and given over to life outside of one’s mind. – Patrick Armstrong