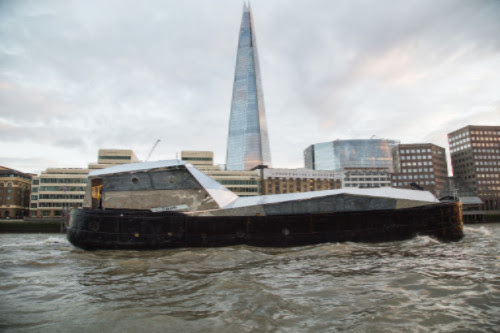 A 25-metre long former freight boat mounted with a mirrored polyhedron sculptural form, Fluxland will navigate along the Thames on a series of journeys over the course of the month, as a travelling visual and sound installation.

This pioneering project is a year in the making. Since sourcing the original vessel, de Commarque has been converting the structure in its docking in a Dutch shipyard, readying Fluxland for its voyage to London. Its polyhedron form is influenced by the belief in ancient Greek philosophy that the shape inspires philosophical and artistic contemplation. The mirrored surface invites internal contemplation, at the same time reflecting the external world. Visible and audible from the banks of the river as it journeys, Fluxland will reflect the passing buildings across its angled facets, mirroring elements of the city skyline. Visitors will be able to hear the artist’s soundtrack of samples sourced from all over the world, and the boat will moor regularly in locations where viewers will be able to board and experience its immersive environment.

Fluxland takes its name from the Fluxus movement, an artistic revolution in the 1960s with leading figures including Joseph Beuys and John Cage who de Commarque identifies as influencers. The Fluxus movement sought to break down the boundaries between art and life and facilitate unexpected encounters with art in the public realm. Central to the movement was the idea that art was an agent of progress and change for society and interaction was central to a work of art. Similarly, Fluxland is activated by its participants and encourages societal and cultural change that goes beyond the project. 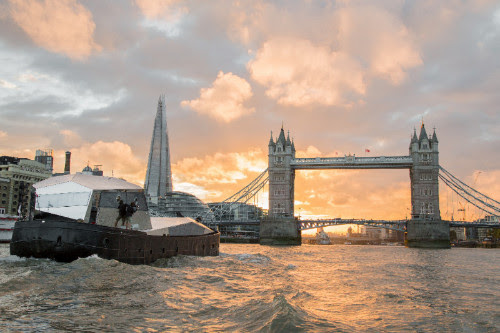 Fluxland will serve as a space for debate and discourse when leading thinkers and keynote speakers come together on the boat for an inaugural conference. The conversation, which focusses on the intersection of philosophy, history and the notion of human progress, will be streamed online, bringing the discussion to the global public. Speakers at three separate talks held during the month of September will include Mark Rappolt, Fatima Bhutto, Héctor Abad Faciolince, Elif ?afak, Adam Thirlwell, Pankaj Mishra, Sophie Hackford and Sonia Trigueros. 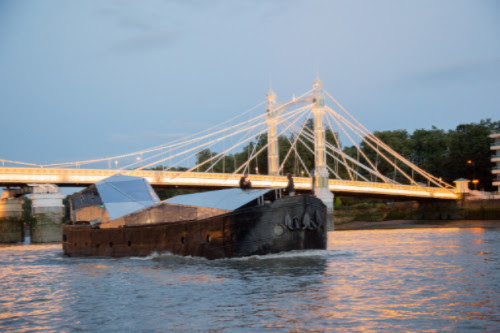 About The Artist
Cyril de Commarque (b.1970) lives and works in London. Recently the subject of a solo exhibition at MACRO (2014), his work has been featured in prominent group shows at the Grand Palais and the Bibliothèque Nationale de France in Paris, and the Fondazione Giorgio Cini in Venice alongside the work of artists including Marcel Duchamp, Joseph Beuys, Gerhard Richter and Ai Weiwei.
De Commarque works with diverse media and invented machines and structures to explore historical and contemporary conflicts and the notion of human progress. Previous works examine themes such as the evolution of political and geographical borders, and the way in which systems of control threaten personal freedoms.