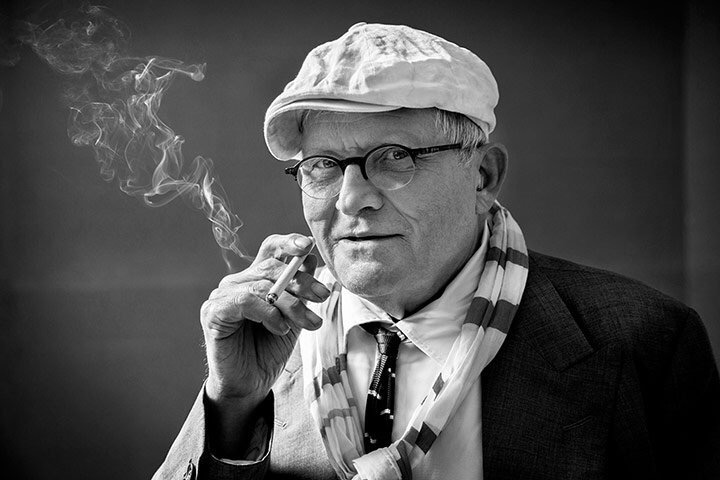 This exhibition at Pace will present a group of works Hockney made on the iPad during visits to Yosemite National Park in 2010 and 2011 and highlight the artist’s continuing engagement with the landscape, particularly that of the American West. Always interested in the possibilities presented by new technologies, Hockney took the iPad to Yosemite and used it to draw the landscape in situ as he experienced it. The compactness of the device allowed him to work in an immediate and impromptu manner.
During the 2010 trip, Hockney created over twenty drawings, which he titled The Yosemite Suite. Recognizing that the drawings done on the iPad could be produced as large prints, Hockney calibrated each gesture and color accordingly, carefully transposing the scale from screen to print. 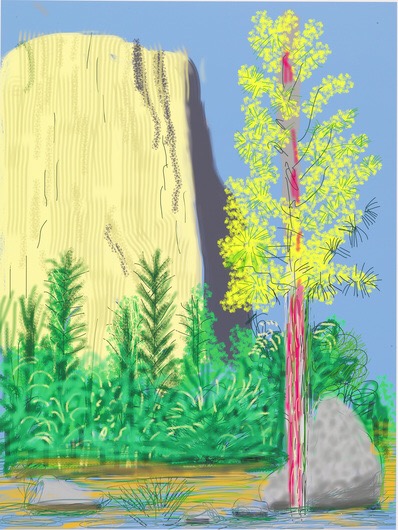 In 2011, Hockney began experimenting with larger prints of his iPad drawings, which measure as high as eight feet tall. Similar to his multi-panel landscape paintings, these large-scale images of the Yosemite Valley are printed on four panels and solve the problem of capturing the vastness of Yosemite in a single image.
The Yosemite series follows a previous set of iPad works done in his native East Yorkshire. The Arrival of Spring in Woldgate, East Yorkshire in 2011 (twenty-eleven) records the seasonal changes along ten miles of a single-track road in the countryside with a suite of fifty-one iPad prints and one oil painting that spans thirty-two canvases. Pace presented a selection of these iPad prints in Hockney’s 2014 exhibition The Arrival of Spring.
In addition to the exhibition at Pace, Hockney’s work will be the subject of two major upcoming museum exhibitions: David Hockney: 82 Portraits and 1 Still Life which opens in July at the Royal Academy, London, showing the artist’s recent paintings done in his Los Angeles studio, and a retrospective of his work opening at the Tate Britain in February 2017, traveling to the Centre Pompidou, Paris, and The Metropolitan Museum of Art, New York.

About The Artist
David Hockney (b. 1937, Bradford, England) has produced some of the most iconic artworks of the twentieth and twenty-first centuries. Hockney’s ambitious and multifaceted approach to art has led him to embrace a range of methods and technologies—photography, fax machines, iPhones, and photocopiers—yet his work always remains rooted in painting.
Hockney received the gold medal for his last year at London’s Royal College of Art in 1962, the first of numerous accolades accrued in his career. Hockney had his first show at the age of 26. In 1970 Whitechapel Gallery, London, organized a traveling one-artist exhibition that was the first of several major museum shows worldwide. He has since been the subject of more than 400 solo exhibitions. In 2012 Hockney was appointed a member of the Order of Merit by Queen Elizabeth II.
Hockney’s iPad drawings have been exhibited in numerous solo exhibitions worldwide, including David Hockney: Me Draw on iPad, Louisiana Museum of Modern Art, Humlebæk, Denmark (2011); and David Hockney: A Bigger Exhibition (2013–14), de Young Museum, San Francisco. His iPad drawings were also included in David Hockney: A Bigger Picture (2012), which was organized by the Royal Academy, London, and traveled to the Guggenheim Bilbao and Museum Ludwig, Cologne.
Hockney lives and works in Los Angeles. This is his fifth exhibition at Pace since 2009.