As Such And In As Much As is a solo exhibition of new works by British artist Tim Ayres at PM/AM gallery. 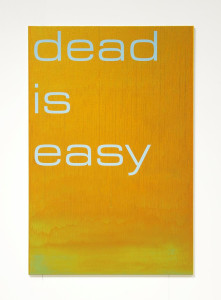 After obtaining his Master’s Degree from the Chelsea School of Arts in 1989, Tim Ayres left England to pursue his studies at the Rijksakademie in Amsterdam. Instead of returning a year later, as originally planned, he remained in The Netherlands. His work has since been on view in a number of continental museums, amongst others Kunstmuseum Bern, Museum Wiesbaden, The Museum for Contemporary Art Oslo, and the Stedelijk Museum in Amsterdam, which also holds major paintings of the artist in its collection. Since his departure from England, his work has rarely been seen in the UK and As Such And In As Much As represents his first solo show in the UK for 25 years.

About The Artist
Tim Ayres (b. 1965, Hastings, England) is a British born and Amsterdam based artist whose meticulous text and abstract paintings are influenced by poetics, minimalism and semiotics. Although the works in this exhibition are all recent, the exhibition arguably provides a synopsis of the artist’s oeuvre. Key subjects with which Ayres concerns himself form recurring elements in the show. Words, music and the grid structures are essential visual aspects which have been, and still are, significant to his practice. His work has featured in exhibtions across Europe and can be found within collections such as ABN/Amro Bank, Mondstudio, Sharjah Museum and The New York Public Library. More: www.ayres.nl