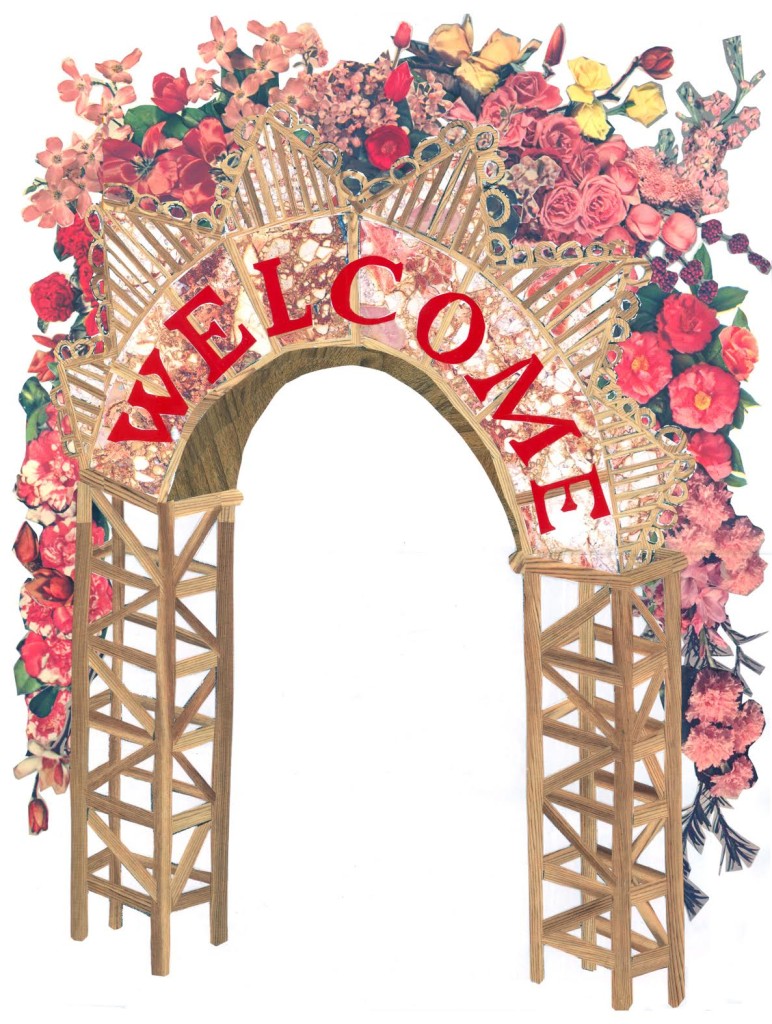 A brass band will stage a re-enactment of a ‘Banqueting Cavern recital’ at the point of the lowest spring tide of the year. Marching drummers will lead visitors across the beach to a temporary commemorative arch at the entrance to the cave site where the band will play. 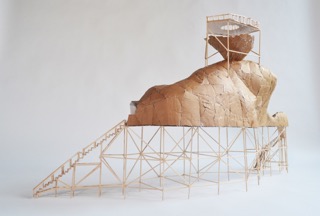 In the early 20th century this vast cave hosted up to 1000 visitors at candlelit performances. Later deemed unsafe it was secretly dynamited to destruction in 1987.
The music will also be relayed from the performance to a sculptural scale-model rendition of the cave which will stand atop the cliff. A newly compiled sound piece will be broadcast from inside the replica structure evoking elements of the Brass ensemble’s recital. Slowed down to an almost unrecognisable degree it will reflect the speed of tidal changes. Ashton’s temporary installation examines histories, fragments, stories and reminiscences surrounding this subterranean wonder.

Many of Ashton’s recent works have been fantastical responses to (mostly) underground locations hinting at histories and narratives while recreating, interpreting and questioning ideas surrounding the artifice of the replica.

About
The Banqueting Hall Cavern was a naturally occurring cliff cave enlarged through white marble quarrying in the 17th century. Concerts were held in the cave at exceptionally low tides from the 1890s until the 1930s for which a harmonium was carried over the rocks to the beach. Clara Novello once sang in the cave ‘to an enraptured audience’. Later con-sidered unsafe, it was dynamited in 1987 using two and a half tonnes of explosives.

‘Visitors were requested to bring “campstools and candles” and this mandate was cheer-fully and liberally obeyed, the result being that the vast “hall “ was equipped with hundreds of lights introduced by visitors, while the executive decorated the interior with numerous Chinese lanterns, and the occasional burning of the magnesium light. There were enough rays of light shed from the 300 or 400 candle power to discern friends, and gives piquancy to the kaleidoscopic restlessness of these denizens of the deep (cavern).’
(‘A Cavernous Concert’, The Tavistock Gazette Sept 1895)

About The Artist
Bridgette Ashton was born in London in 1967. Her practice includes sculpture, print and participatory works. Her most recent works have been made in response to redundant or overlooked sites, objects and archives. Ashton’s scale-models, depictions and proposals engage with the histories and narratives of the sites and embrace the paradox of the rep-lica as visitor attraction with the nostalgia that surrounds it.

She has staged participatory walks in a number of locations, looking at history and ab-sence. These have included ‘Loddiges Miscellanea’ in Hackney (with Transition Gallery); ‘Margate Subterranea’ in Margate (in conjunction with a solo exhibition at The Davis Mu-seum and Crate Project Space) and ‘The Deptford Biscuit’, commissioned as part of Deptford X, 2012 curated by Hew Locke Indra Khan.