Unveiled today, 15 June 2015, is a new permanent artwork by British artist Hew Locke to mark the 800th anniversary of the Magna Carta at Runnymede, Surrey. Locke presents The Jurors, a new public artwork permanently situated at the site where the Magna Carta was sealed 800 years ago. Unveiled in the presence of HM The Queen, HRH The Duke of Edinburgh, The Duke of Cambridge, The Princess Royal and Vice Admiral Sir Tim Laurence, approximately 3,000 people will attend the event in Runnymede today, which will include the performance of a specially commissioned dedication written by poet Owen Sheers. The Jurors is produced by Situations, an arts organisation dedicated to producing dynamic new forms of public art. 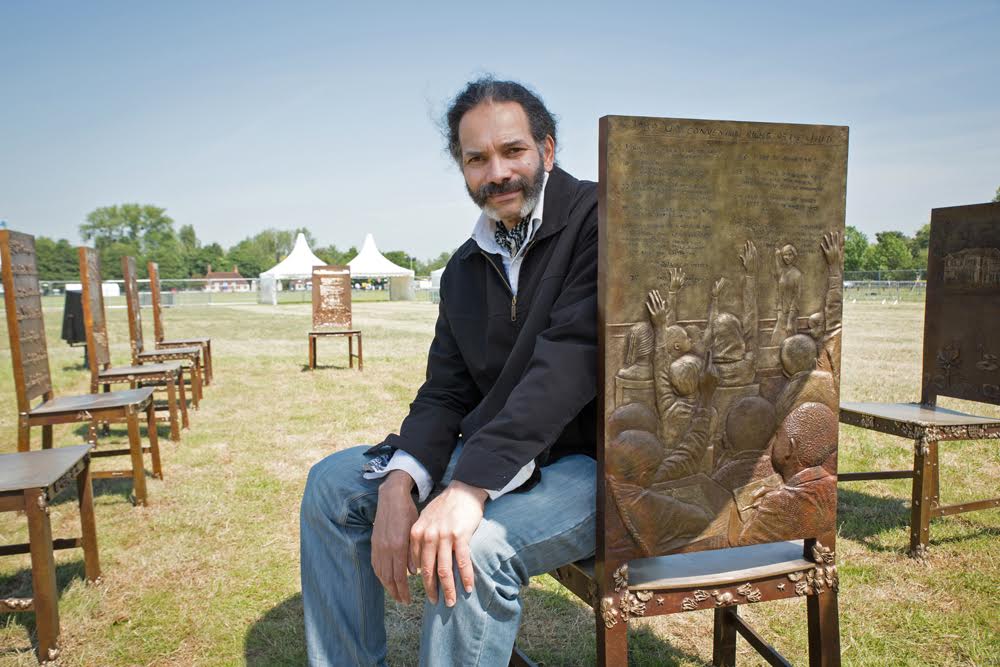 Locke’s new work, The Jurors, is formed of 12 bronze chairs, each decorated with images and symbols relating to past and ongoing struggles for freedom, rule of law and equal rights, including: a loudhailer belonging to Harvey Milk, gay rights campaigner and the first openly gay person to be elected to public office in California from 1977-78; the Zong Massacre of 1781, when 133 African slaves were thrown overboard from a British owned slave ship and for the first time the captain and crew were prosecuted; Cornelia Sorabji was the first woman to practise law in India; and Lillie Lenton, a suffragette. The Jurors is not a memorial, but rather an artwork, which challenges us to consider the ongoing significance and influences of the Magna Carta. The dedication written by Owen Sheers relates directly to the stories that have ins pired Locke and the making of this work.

Signed in 1215, the Magna Carta is considered one of the first steps towards modern democracy. Its fundamental principles of justice formed the basis of common law and influenced the development of the United States constitution, the United Nations Universal Declaration of Human Rights and over a third of the world’s legal systems. The chairs seem to be awaiting a gathering, discussion or debate of some kind: an open invitation from the artist for the audience to sit, to reflect and to discuss together the implications of the histories and issues depicted.

“Runnymede is a beautiful and important historic site, so to create a piece of art here is a real responsibility. Magna Carta reminds us that those in power have it only at our consent. I hope my piece will encourage people to reflect and discuss the legacy and future relevance of Magna Carta across the world.”

Locke is well known for his visual expressions of power, particularly through royal portraiture, coats-of-arms, company share certificates and costume. His works have been included in The Folkestone Triennial (2011), he was a featured artist at the launch of the Pérez Art Museum Miami (2013), and presented his first performance piece in the Tate Turbine Hall last year. This year his work was featured in Prospect.3 Contemporary Art Biennial (New Orleans, LA, USA) and the Kochi-Muziris Biennale (Kerala, India).

The art work was commissioned by Surrey County Council and the National Trust.