Auckland Castle, the former palace of the Prince Bishops of Durham, is described by Diarmaid MacCulloch, Professor of the History of the Church, University of Oxford as

“the third best episcopal complex in the world, beaten only by the Vatican and Avignon.”

Opening in 2018, the Castle will create a permanent national exhibit dedicated to exploring the shared and diverse history of Faith across the British Isles. The exhibition will examine the meaning and representation of belief from prehistory to the present day. Bill Viola’s exhibition is the first in this series of reflections on the meaning of faith located within the sacred space of St. Peter’s Chapel, offering the public an intimate experience of Viola’s work. The exhibition marks a significant return for Viola to the North East of England. His long association with the region traces back to his seminal work The Messenger, which premiered in Durham Cathedral in 1996. The exhibition will be followed by a major solo exhibition of Viola’s work at Yorkshire Sculpture Park in October 2015. 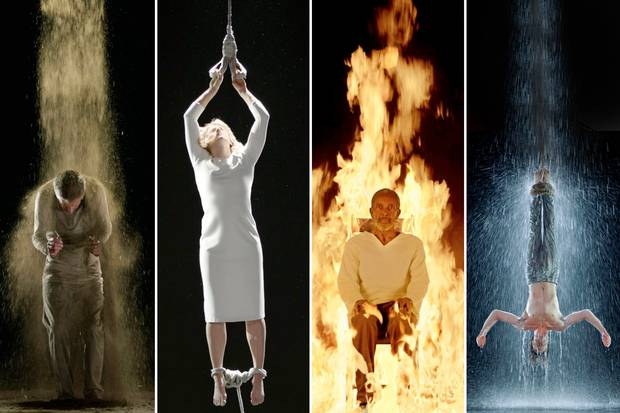 Earth Martyr, Air Martyr, Fire Martyr and Water Martyr within St. Peter’s Chapel, Auckland Castle, are works derived from Viola’s large-scale video installation, Martyrs (Earth, Air, Fire, Water), unveiled at St Paul’s Cathedral in London, May 2014. In this work, Viola examines the theme of suffering, sacrifice and the concept of personal martyrdom. He reflects on the original Greek understanding of martyr meaning ‘witness’, and which for him exemplifies, “the human capacity to bear pain, hardship and even death in order to remain faithful to their values, beliefs and principles.” Like much of his work, Earth Martyr, Air Martyr, Fire Martyr and Water Martyr engage with themes common to the universal human experience. With roots in both Eastern and Western art and spiritual traditions including Zen Buddhism, Islamic Sufism and Christian mysticism.

“Bill Viola has created deeply moving and challenging works within Christian sites over the last two decades. Installations at Durham Cathedral and St Paul’s Cathedral have moved viewers within our great national basilicas. The presentation of Earth Martyr, Air Martyr, Fire Martyr and Water Martyr within the intimate surrounds of the private St. Peter’s Chapel at Auckland Castle creates a contemplative and personal reflection on the role of faith within our lives today. The contemporary contemplation on life, death and afterlife, as well as the true meaning of martyrdom within Viola’s work reflect the deeper narratives we hope to explore within our forthcoming permanent exhibitions of the history of faith in the British Isles. I am incredibly excited that Auckland Castle has the opportunity to explore these themes, continuous throughout our shared past, by having Bill Viola as our first major contemporary exhibition.”

Bill Viola (b. 1951) is internationally recognised as one of the leading artists of our time. An acknowledged pioneer in the medium of video art, he has for over 40 years created a wide range of video installations displayed at locations across the world from major museums to religious institutions and universities. Using the inner language of subjective thoughts and collective memories, his videos communicate to a wide audience, allowing viewers to experience the work directly, and in their own personal way.

Kira Perov, executive producer and assistant director of Martyrs, is Viola’s partner and collaborator. She has worked closely with Viola since 1978 and as executive director of Bill Viola Studio she creatively guides and manages the production of his videotapes and installations. She has also documented their working process on location and in the studio and amassed a large archive of images from their experiences together, as well as images of the works. She edits all Bill Viola publications, and curates and organises exhibitions of the work worldwide.

The artist’s acclaimed works for sacred spaces include The Messenger, a special commission for Durham Cathedral in 1996, Ocean Without a Shore, premiered in the 15th-century church of San Gallo at the 2007 Venice Biennale, and the video triptych Study for The Path (2002) donated to one of Milan’s historic churches, Basilica di San Marco, in 2008.

Auckland Castle – Auckland Castle is one of the most important episcopal palaces in Europe, and the magnificent home of the Prince Bishops of Durham, England’s only Prince Bishop. Between 1832 and 2011, the castle was the official residence of the Bishops of Durham, and the Bishop of Durham still works there today. After Vatican City and Avignon, Auckland is described as the best working medieval Episcopal complex in Europe. Its Grade I listed architectural structures and features tell the history of our nation, in a building that has been created and recreated over the centuries by some of the leading architects of each age, including James Wyatt, architect to George III. No architectural work has been done on the castle since the 1790s, and it is expected that careful conservation work should reveal its hidden past. Together, the buildings and landscape form a nationally significant heritage site, with highest Grade 1 level. Auckland Castle is also home to one of the most significant treasures of European religious art: in 1756 the then Bishop of Durham bought 13 paintings by Francisco de Zurbarán (1598-1664), depicting Jacob and his 12 sons, representing the 12 tribes of Israel.

The Auckland Castle Capital Project – The Auckland Castle Trust was established in the summer of 2012. The castle itself, with its deer park, derelict walled garden and paintings, including the internationally famous works of Jacob and his 12 Sons by the Spanish master Francisco de Zurbarán, formed the nucleus of the original holding.

The restoration of Auckland Castle will create a major new art and heritage destination in the North East of England and for the UK and an important culture-led social economic regeneration initiative for the North East of England. The Castle will be the setting for a nationally significant permanent exhibition of religious art in Britain with an extensive collection that includes one of the most important treasures of European religious