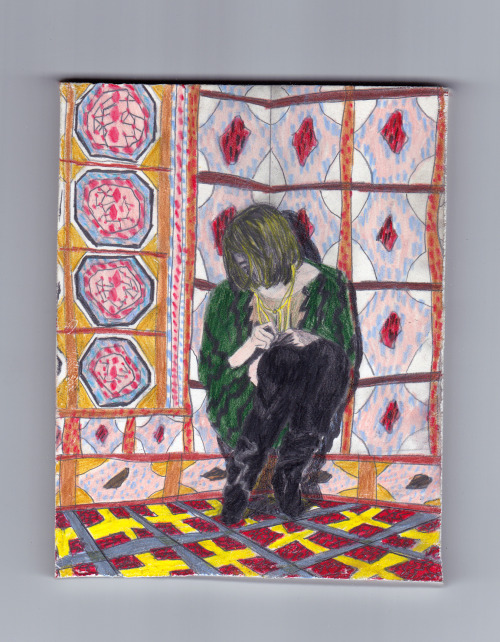 Dolly is an extensive installation of 58 paintings on plaster – Marie Jacotey’s first solo exhibition at Hannah Barry Gallery. Cast by her own hands, each of these almost-identical blocks has a size and orientation that puts us in mind of medieval religious icons, or one could say that they echo the ancient Greek Orthodox architecture of Jacotey’s heritage. Despite this visual connection, the works do not contain any substantive religious content. Instead, they are populated repeatedly by mysterious girls and women, vacant landscapes, menacing spectres, and periodic outbursts of extreme violence.

The repetitive formal structure of the plaster windows is mirrored in the reiteration of discrete themes cycling throughout Marie Jacotey’s body of work. She has been able to explore the grief and anger of separation, simultaneously referencing the forms and motifs of 20th-century architecture and fashion and creating anew abstract shapes by zooming in and in again on her novel patterns of concrete and cloth until the point they detach into abstraction.

Jacotey always envisioned this as a substantial body of work, and the series is now complete. While not strictly autobiographical, the paintings resonate with emotional situations and stories that Jacotey has lived, in her own encounters or in her mind’s eye. Jacotey describes the women who appear in her pictures in terms of stillness and muteness. Reserved and distant and cool to the point of numbness, these figures may be adjacent to acts of extreme violence and emotional distress, but they are not passive. They are always engaged and engaging, meeting the audience’s gaze and conspiring to conjure a timeless mood of noir and ennui.

We discovered Marie Jacotey’s work in Save Yourself!, the group show of drawings curated by Shaun McDowell here at Holly Grove this summer. She is selected for Bloomberg New Contemporaries showing in London at the ICA (from 26th November) and previously at the Liverpool Biennial. Born in 1988, Paris, she currently lives and works in London.