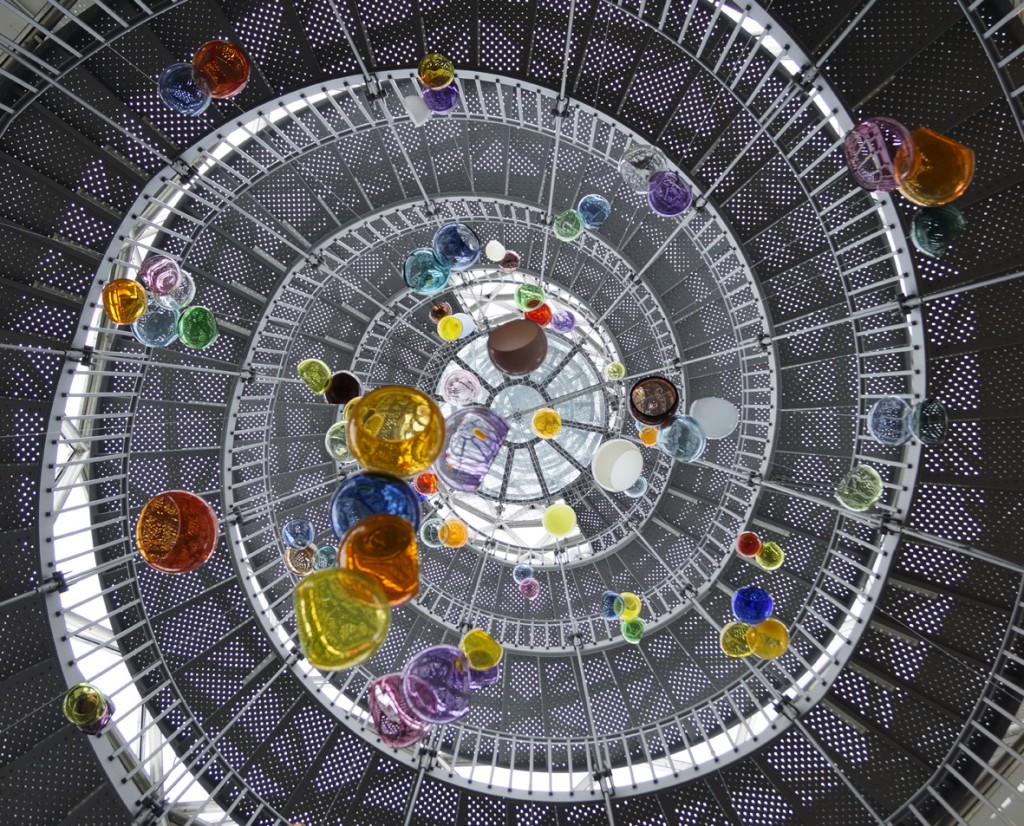 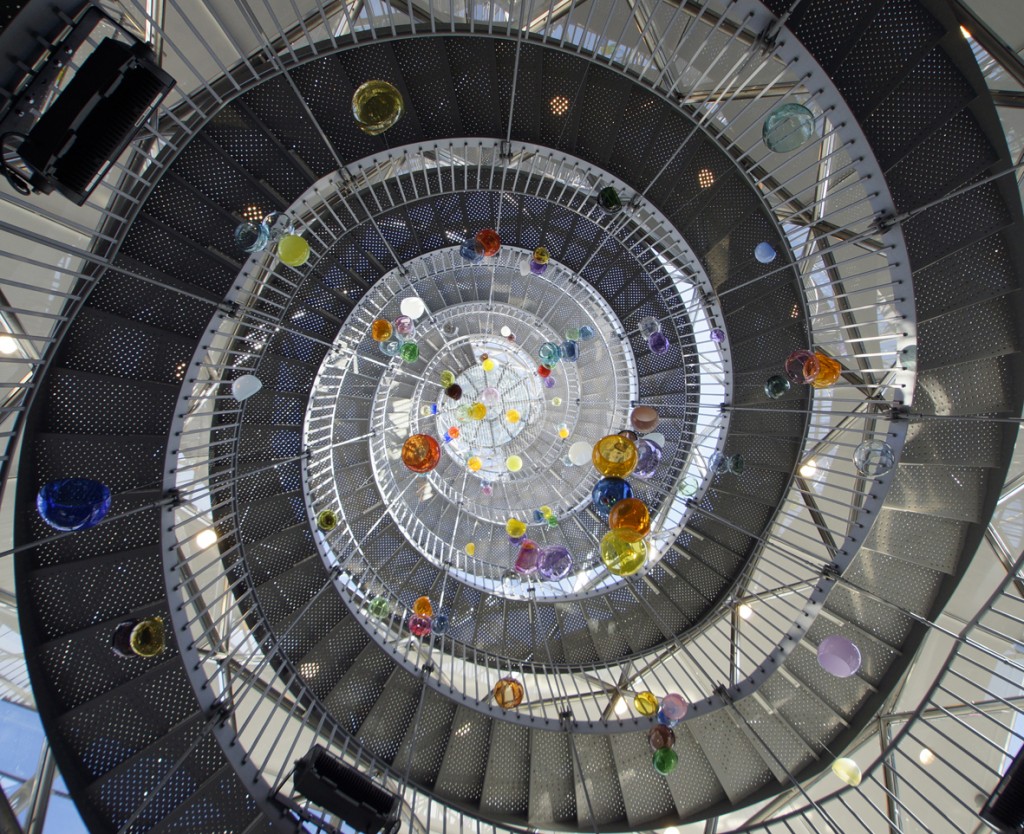 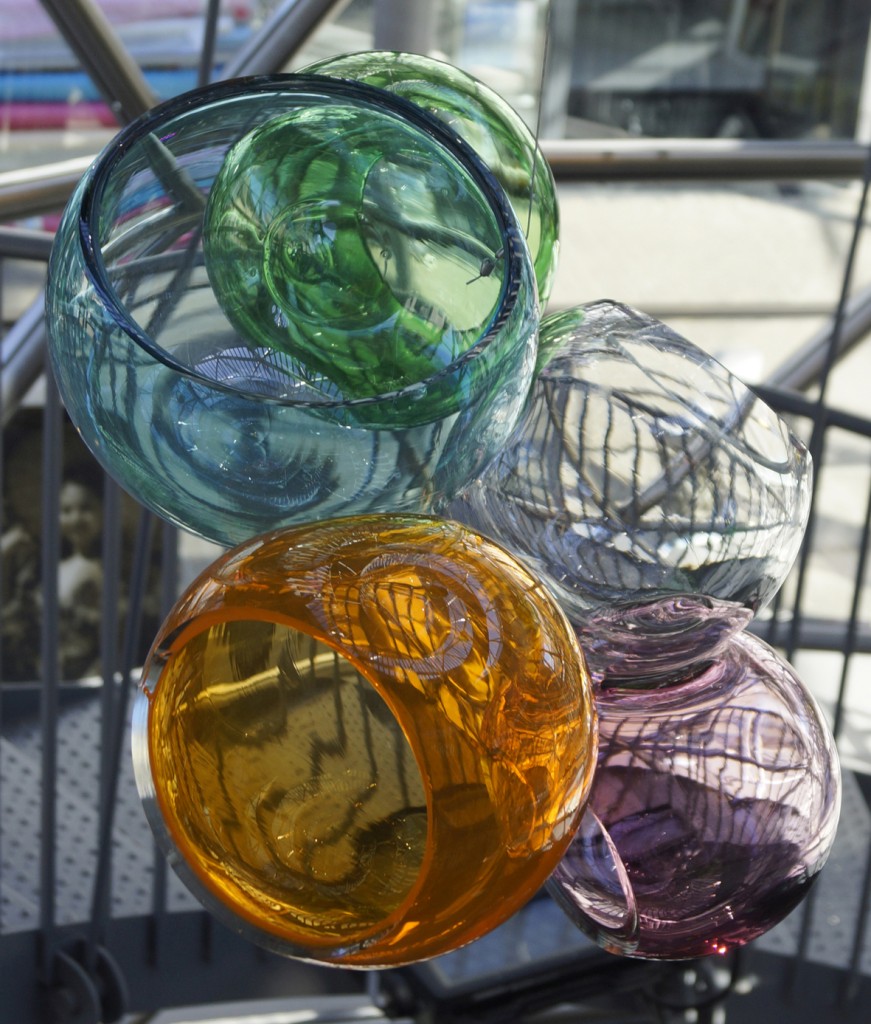 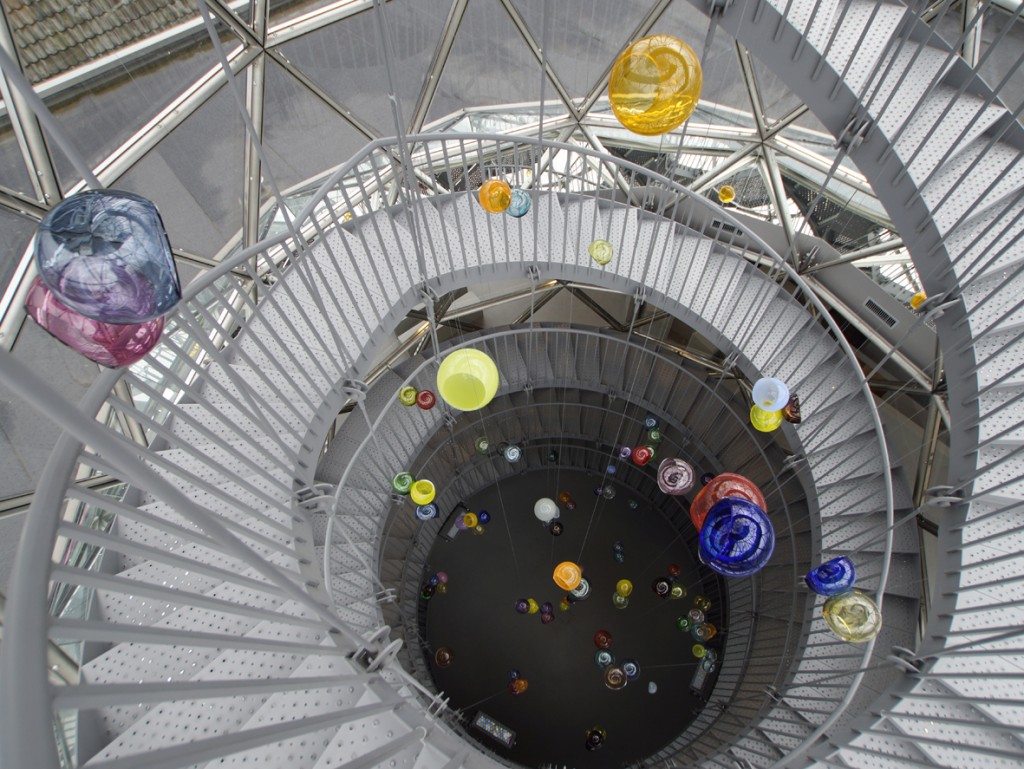 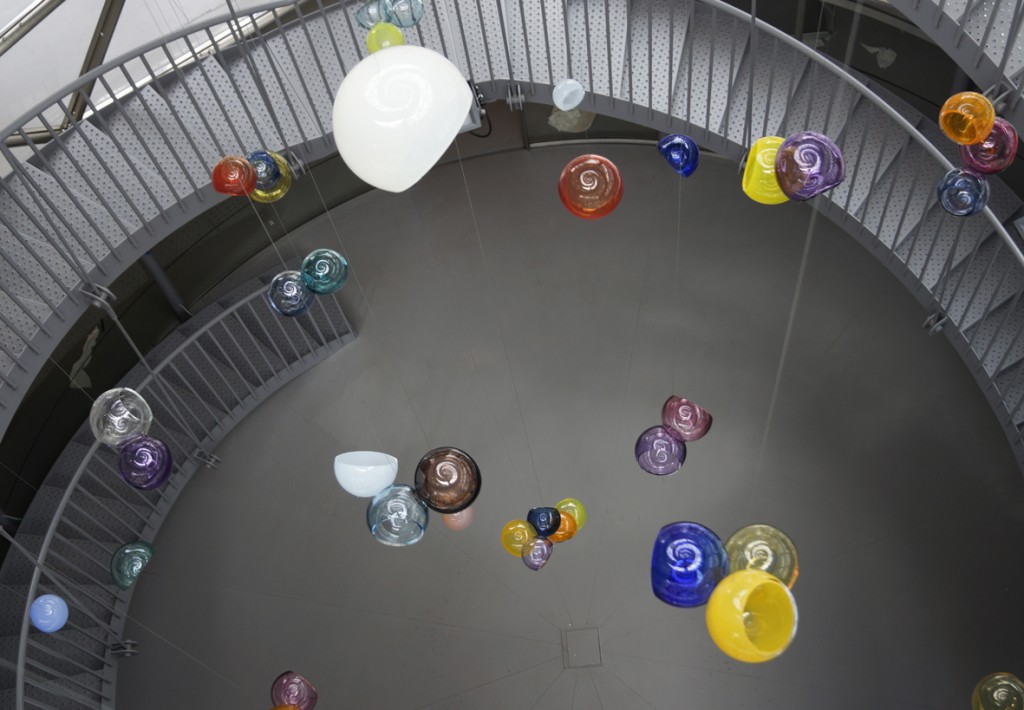 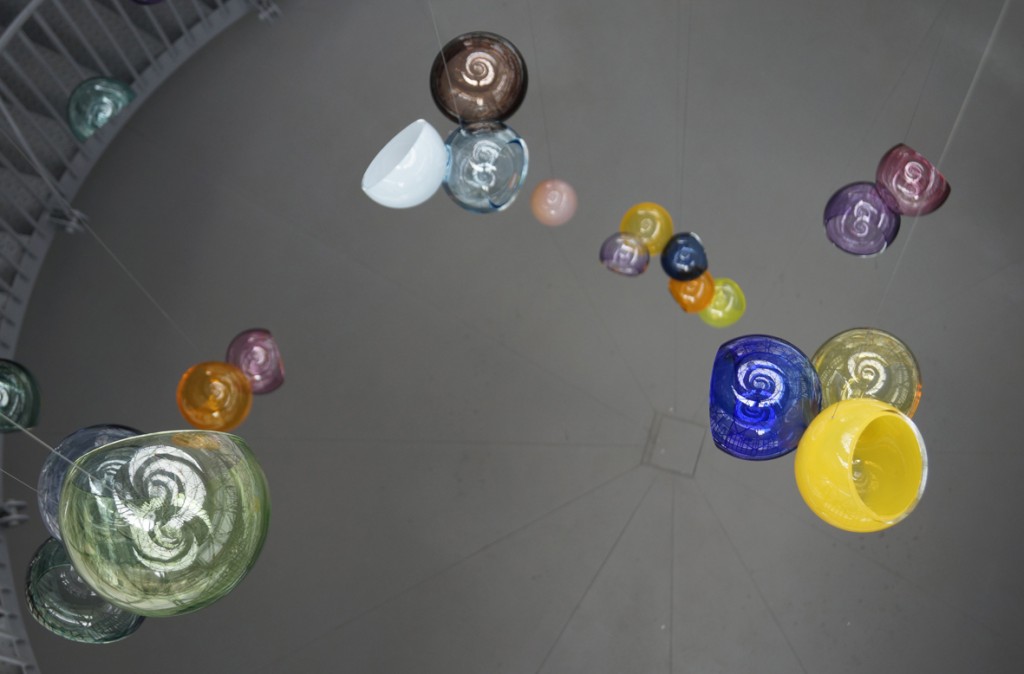 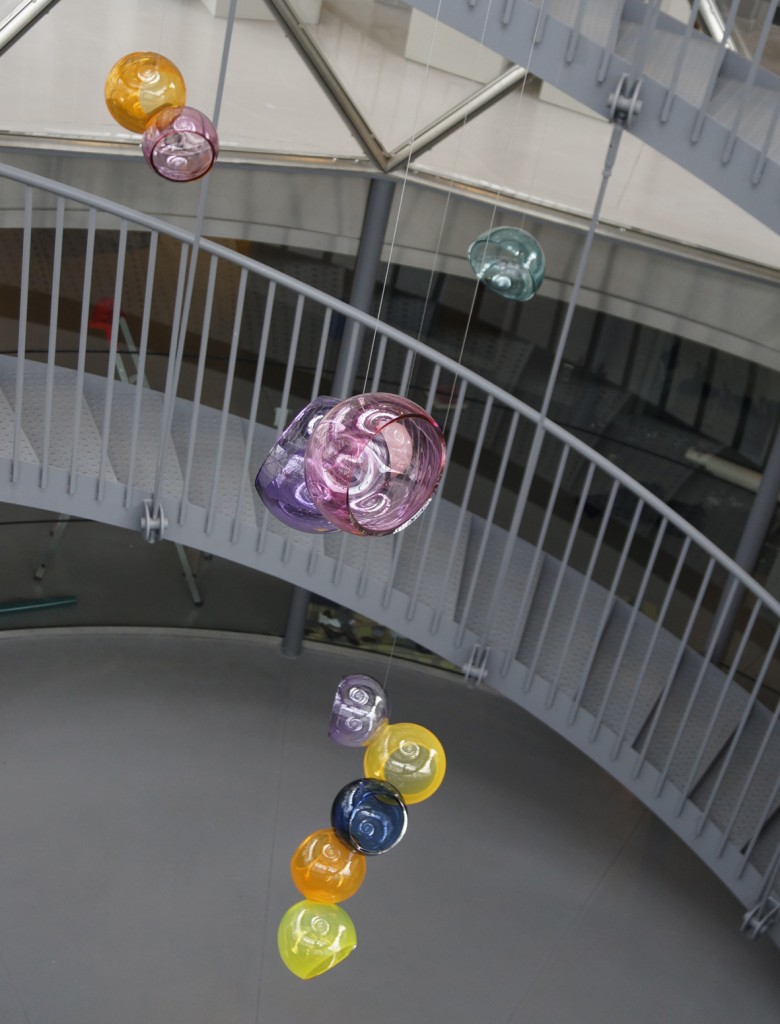 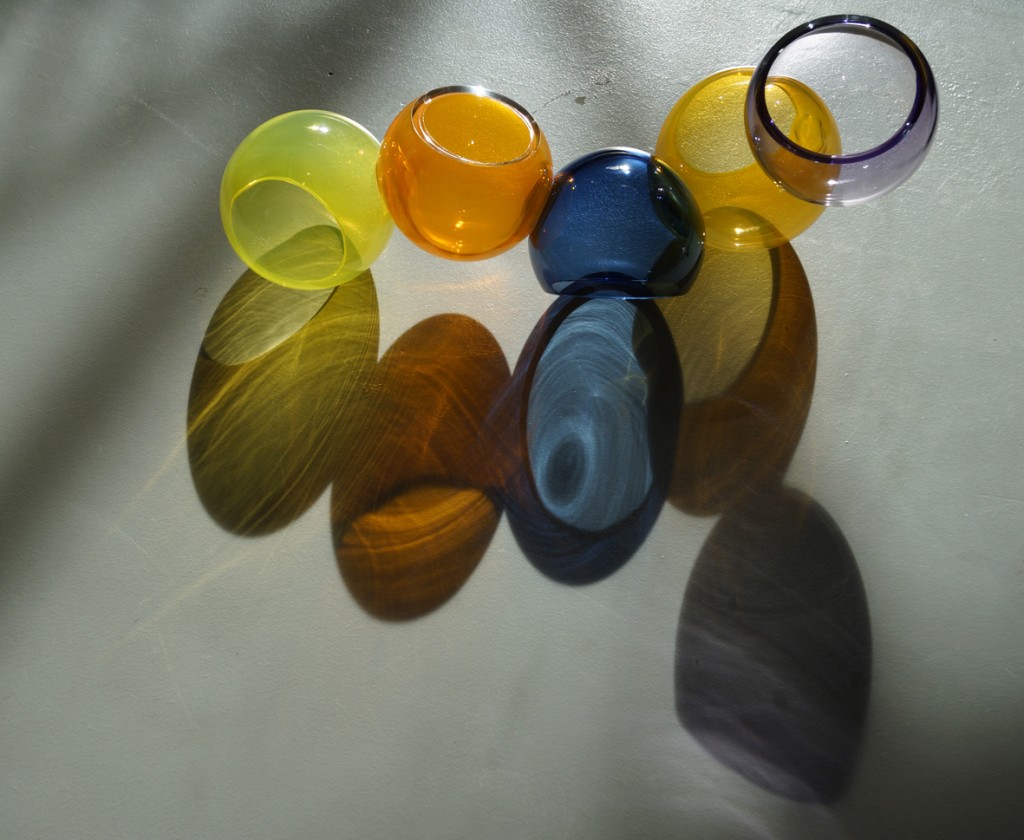 All images: Michael Petry AT the core of the Algorithm, 2014 Installation and detailed images from Lommel

UK GLASS through to 14th September 2014, the glass museum GlazenHuis in Lommel presents an exhibition on contemporary artistic glass from the United Kingdom. Above are images of Michael Petry’s Installation AT the core of the Algorithm. www.hetglazenhuis.be/en

Prime numbers are defined as whole numbers, which are divisible only by themselves and by the number 1 – for example, 2, 3, 5, 7, 11, 13, 17 etc. Over 2300 years ago, the Greek mathematician Euclid proved that there are an infinite number of primes, but since the Greeks did not consider 1 to be a number, Euclid did not include it in his infinite series.

Similarly, some physicists have used mathematics to describe various physical universes, which intersect with our own and collectively comprise a ‘multiverse’. Perhaps those intersections are like those between soap bubbles – a frothy congerie of universes, popping into and out of existence. Physicists believe that each universe comes into being upon the gravitational collapse of a massive star, creating a black hole within its own universe, and a new universe within the multiverse; and at the centre of each black hole physicists use mathematics to describe a gravitational singularity, 1.

Can we know if this is true? We cannot. But we do know something of the mathematics of our own universe, and can extrapolate from that. Indeed, since the dawn of recorded history, we have used mathematics to describe the movement of the sun and the moon and the stars. And as our mathematical knowledge has become more sophisticated, we have developed ‘procedures for calculation’ – mathematical instructions which use logical operations (if/then/or) to recycle the output of a procedure as its own input; a mathematical result which give birth to further mathematical results; an interaction of output and input in a mathematical multiverse; an iteration; an algorithm.

The word ‘algorithm’ is a linguistic iteration; a mangled transliteration of the name of the brilliant 8th century mathematician, Muhammad ibn Musa al-Khwarizmi, whose ideas have been developed and applied by subsequent mathematicians, notably Alan Turing, who used algorithms to solve (in fact, to prove the insolvability of) a profound mathematical problem – the Entscheidungsproblem, or the ‘decision problem’.
Turing existed in various universes, most obviously an academic universe (he was a fellow in mathematics at King’s College, Cambridge) and a political universe (he was co-opted by Britain’s Government Code and Cypher School to decrypt Nazi codes, most famously the Enigma code). Notwithstanding the extraordinary contribution he made to academia and to Britain’s war effort, both of those universes buckled and failed when they interacted with two other universes that Turing existed in – a social-sexual universe (Turing was tried for gross indecency in 1952, after he acknowledged having a sexual relationship with his partner, Arnold Murray) and a Cold War universe.

The defeat of Nazi Germany and its Axis allies was succeeded by a Cold War with Russia and its Soviet allies and conspirators – including various spy rings such as the Cambridge Five. In 1951, a year before Turing’s arrest, two members of the Cambridge Five (Guy Burgess, a gay man and Donald Maclean, a heterosexual) defected to Moscow just before their arrest for treason and espionage. Subsequently, two further members (Anthony Blunt, another gay man, and Kim Philby, a heterosexual) were uncovered. The fifth member was never found, and remains an enigma, a parallel spectre.

During this period in American and British history, homosexuals were perceived as heightened security risks – morally deviant, and therefore corruptible/bribable by foreign powers. Communists and gays were seen as dual evils (often conflated into one) that needed rooting out, certainly Joseph McCarty did. After Turing confessed his homosexuality, he was arrested, tried, found guilty and punished by being given female hormones to ‘cure’ him. He grew breasts, he grew depressed and then he was found dead of cyanide poisoning. A half-eaten apple was discovered by his body, and it has been suggested that he laced it with cyanide and committed suicide; just as likely, he may have been murdered by the British State that he’d saved from the Nazis, for they feared he too might defect.

Alan Turing made algorithms. These told his machines what to do to solve technical, mathematical and real world problems. When Turing was the victim of crime, the state, his state, the state he saved by his talents, turned against him. They thought he too would fly to Russia so they sought to cage him. He died in mysterious circumstances that have yet to be resolved. In 2013 that same state, granted him a posthumous pardon. It did not pardon the many thousands of other gay men convicted of similar ‘crimes’ of love, many who are still alive. There are certainly those who believe that Turing committed suicide, there are many universes of truth.

A popular myth has it that the apple computer logo (with one bite out of it) is a tribute to Turing. The heart of an apple is called its core.

Mathematicians talk of the beauty of numbers and proofs. It is a different type of beauty from that described in art, but at its core, each abstract way of seeing the universe (mathematics or art) longs for poetry, the beauty of the imaginable. The glass spheres that make up my installation were made according to an algorithm that I developed with the glass blowers (Gert Bullée, Nadia Matthynssens, Ben Verhaegen), only sets of prime numbers were allowed; each sphere that collided with another had to be bigger than the first; each had to have a piece bitten out of it; and so on. This is a certainty, as this did happen, to my request, and under these simple rules, a complex system emerged. According to current mathematical predictions, there will most certainly be a universe out there where all the prime numbers, all the glass, all the apples, all the algorithms, all the spheres, all the lovers will collide. And it will be beautiful. It will be poetic and Mr. Turing will be there smiling, waiting, loving.