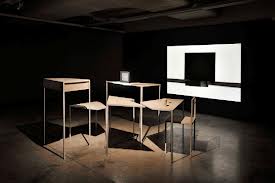 May is Laurence Kavanagh’s first solo exhibition at Marlborough Contemporary.

Part of a continuing project, the Calendar Series marks slippages in time that occur, for example, within the formalising structure of the Gregorian calendar. Through sculpture and collage the work seeks to define distinct spaces and times both as it is made and as it comes to be viewed.

Kavanagh’s work offers an open structure whereby the viewer encounters the work and objects that are often almost shadows of themselves; spectral representations of the physical object completed through memory. Working in a range of materials from paper, resin, paint, graphite and print, the works often create the illusion of precarious or transient form.

Kavanagh’s interest in the cinematic is not only in relation to visual narratives, but also to the architecture which houses the viewing experience in time. In this way there is a constant blurring between image and object, between making and perceiving. The collages in the exhibition follow the 1:1.66 format of the cinema screen, a formal reference to cinema’s infinite capacity for illusion.

A work such as May (McGuffin) of course references the cinematic device of an object which drives narrative forward but may not be of lasting significance itself. The ‘drinking glass’ in this sculpture has the stylised look of a prop. This is a useful term – being neither functioning object nor purely a sculptural object – more an illusion of an object. The McGuffin gives way to a series of consequences or images – such as a collage of the drinking glass shattered.

The scope of the Calendar series – which will take place at set points in time over several years – is driven by a series of intersecting narratives and forms. Kavanagh places a strong emphasis on examining the value a given process takes in the making of an artwork. Raw materials found in the studio – or images of them – become visually embedded within the work. The collages, for example, might reveal the stains, score marks and cuts from scalpel and also pin marks of the processes of making in the studio which in turn give both form and content to the works with which the viewer engages in another time and place.

About The Artist
Laurence Kavanagh was born in 1973 in Liverpool. He lives and works in London. He has exhibited widely, including Temple Bar, Dublin in 2012 and Irish Museum of Modern Art in 2009. In 2008 the Lonely House project was purchased by the Arts Council Collection, and toured the UK as part of the Transmitter/Receiver exhibition. In 2011 he was recipient of the Mostyn Open prize. In 2012 he collaborated with four choreographers, as concept director, artist and designer on Jealousy, a project based on Robbe-Grillet’s novel at the Print Room Theatre, London. April, the previous project in the Calendar series, was seen as part of New Positions at Art Cologne 2013 and also at Gerald Moore Gallery, London. Residencies include the British School at Rome,2006; Irish Museum of Modern Art, 2009; Victoria and Albert Museum, 2010. He has also curated several exhibitions over the past decade.