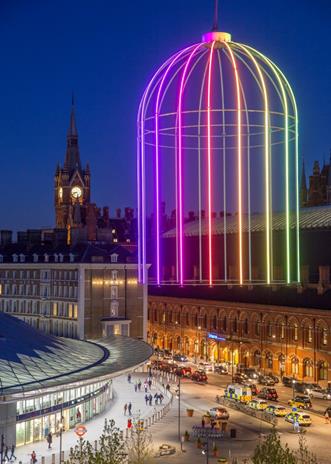 After a brief stint away, the IFO (Identified Flying Object) is returning to its home at King’s Cross. The art installation will be based in Battle Bridge Place, between King’s Cross and St Pancras stations, for people to enjoy; at night it will light up in a rainbow of colours.

The IFO, which was designed by French artist and architect Jacques Rival, is an installation from RELAY, the dedicated art programme at King’s Cross, curated by Michael Pinsky and Stéphanie Delcroix. The IFO itself, often referred to as ‘the birdcage’, due to its domed, cage-like structure, is made up of huge bars standing 9m high, wide enough for visitors to walk through and enjoy the swing, which hangs at its centre. It first appeared at King’s Cross in 2011.

By day passers-by can play inside the structure, enjoying the surroundings from this unusual vantage point, but by night, the structure will come alive, as the bars of the cage illuminate in a brilliant array of colours. Whilst the IFO will primarily be based on the ground, on special occasions its eye-catching structure will be hoisted up into the air to hang freely and light up the night sky.

Ian Freshwater, Project Manager at King’s Cross, says: “The IFO provokes opinions, and encourages people to stop and experience a new structure either by walking inside and around it or by appreciating its lights.”

Over the last three years King’s Cross has embraced and added to the rich tradition of artistic activity in the area. It’s now a hub for art lovers, with Kings Place on the doorstep and Central Saint Martin’s College of Art and Design in the Granary Building, as well as installations such as Across the Buildings by Swiss architect Felice Varini and Black Maria, a major commission by the British artist Richard Wentworth, both on show last year as part of the RELAY programme.

RELAY
RELAY is the first dedicated art programme at King’s Cross. It is inspired by the transformation of the area. RELAY plays with the notion of the human chain, the transfer from one means of transport to another and the progression of the development. The programme was launched with IFO by Jacques Rival, a monumental ‘birdcage’ which returns to the site this year. During 2013, RELAY also featured works from Felice Varini and Richard Wentworth. The artworks appear gradually, highlighting each part of the emerging cityscape.

Jacques Rival
Jacques Rival originally trained as an architect. He creates monumental objects and outdoor installations that play with the scale of our immediate environment and alter perceptions of the cityscape, taking ownership of things like sculptures, rivers and parks, and often using light as a way to draw attention to parts of the urban environment. Born in Lyon, Jacques founded his own creative agency in 2000; since then he has had his work displayed at light festivals and design events across Europe and in the United States. Recently, Rival contributed a piece called ‘Big Tree’ to the Amsterdam Light Festival (2013-14), a 40 day annual light festival in Amsterdam’s historic city centre alongside an installation in Moscow, ‘Origami in the Air’ earlier this year.