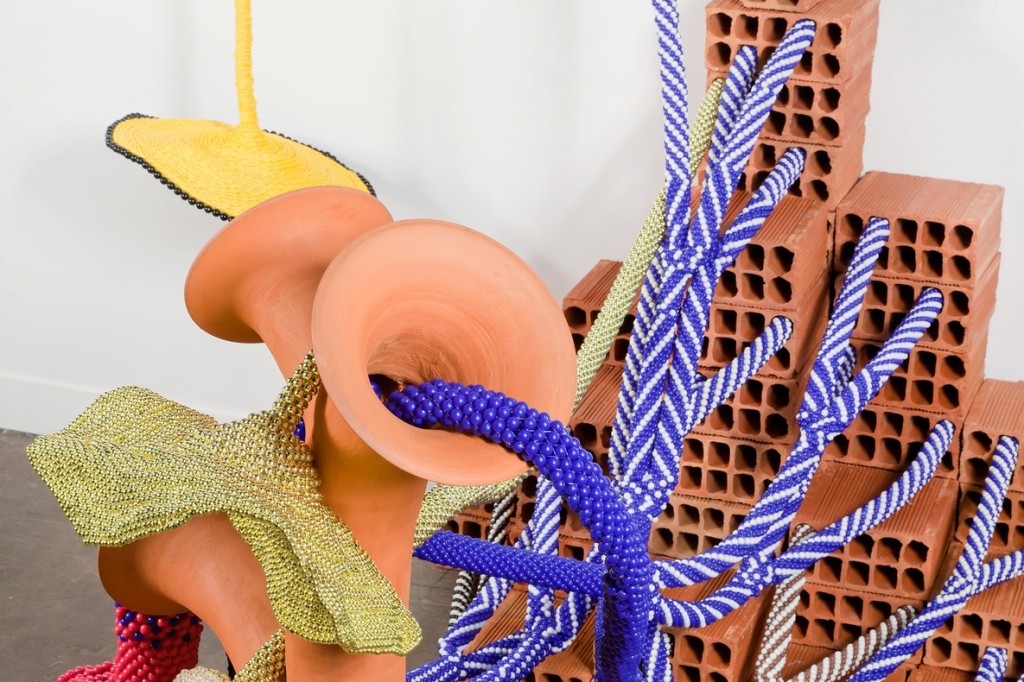 Maria Nepomuceno TRANS
TRANS draws inspiration from the common linguistic prefix and its associated range of references: ‘trans-‘ actions such as transgressing, transforming and transmuting. The interelated series of sculptural installations that make up the exhibition are designed to intensify the relationship between the viewer, the work and the surrounding architecture. Pre-existing elements such as bricks, industrial piping and even the gallery walls merge with the organic forms of the sculptures, made of hand-sewn ropes, beads and woven straw. The crossing and interlacing of materials express a desire for spatial expansion beyond the physical confines of the gallery.

“The system of thought that has developed within my practice follows the logic of the movement of the spiral – and the starting point is the sewing that builds the works. The spiral moves from the inside out, and this movement seeks a relationship with the world, as evidenced in my work in the approach to space and the incorporation of architectural elements from everyday life. The spiral also moves from outside to inside, and thus the works also seek my roots, embody my history and my origins: most crucially painting and the craftsmanship of indigenous Brazilian cultures. TRANS is an exercise of delving into the essential concepts that inform my work and its particular vocabulary, but at the same time, as with the spiral, expanding these concepts further beyond the personal, into the world, and towards the cosmos”. 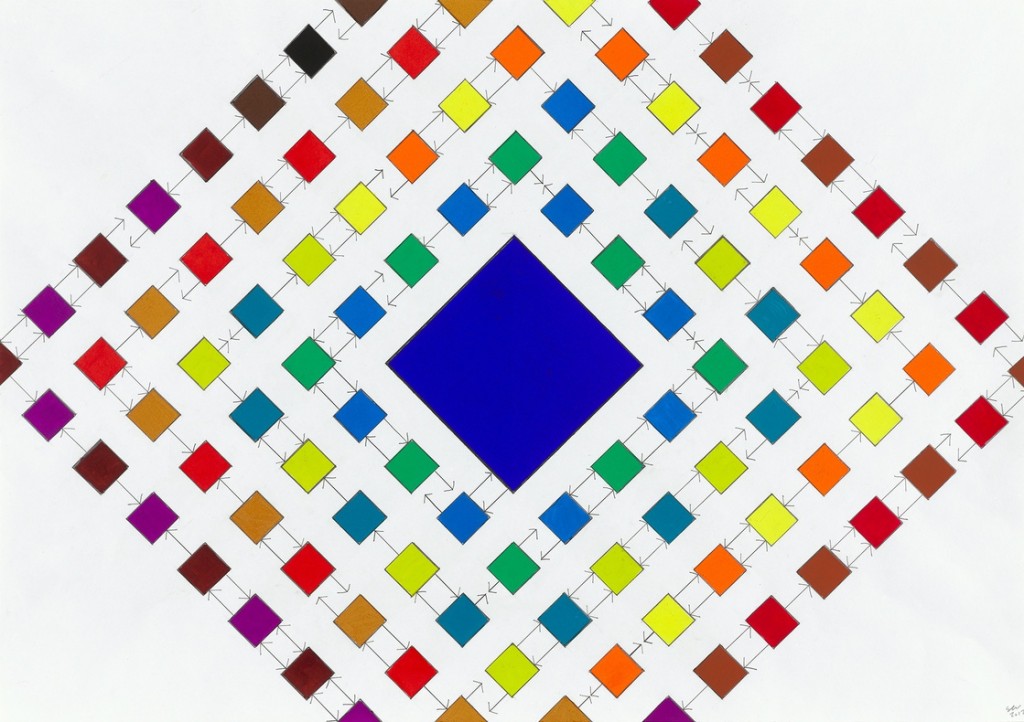 Stephen Willats REPRESENTING THE POSSIBLE
Drawing has been key throughout Willats’ practice, often as a signifier of larger ideas. From the start of his career in the early 1960s, Willats has rejected aesthetic expression in favour of positioning his drawings as active ‘data’, which offer a means to communicate a way of looking at and thinking about our environment. REPRESENTING THE POSSIBLE comprises four large-scale site-specific wall drawings that will transform the gallery’s architecture into an immersive drawn environment with thirty-seven individual works floating upon their surfaces. The installation, a first for the artist on this scale, is designed to be experienced as a single work, with each individual drawing acting as a point of intersection that provides a variable, dynamic exchange between the viewer and their surroundings.

The act of drawing for Willats exists on multiple levels, each related but with specific outcomes, as he explains in a new text published to accompany the exhibition:

“What as a thought is internal, transient and unfocussed, through the process of drawing becomes clear and possible; to be understood by someone else, from one person to another – a vehicle for social exchange. So the drawing can be both descriptive, in that it gives a view on something that already exists, or prescriptive, in that it seeks to represent something that does not yet exist, is only imagined as a possibility. Something only becomes a possibility once it exists as a thought”.

Throughout his career Stephen Willats has situated his pioneering practice at the intersection between art and other disciplines such as cybernetics, systems research, learning theory, communications theory and computer technology. In so doing, he has constructed and developed a collaborative, interactive and participatory practice grounded in the variables of social relationships and settings. Willats creates multi-sensory, multi-dimensional environments to encourage viewers to engage with their own creative and cognitive processes. Relating to the everyday world, his work presents a vehicle of exchange through which viewers can re-examine and transform the way they perceive the fabric of existing reality.