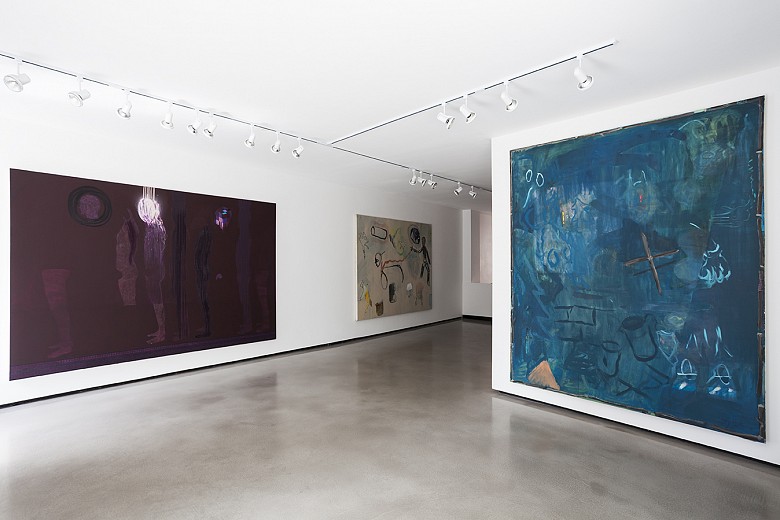 Mapping the Abstract presents three artists who approach abstract painting with a remarkably fresh perspective.
While today the idea of The Abstract typically provokes notions technology and digital media, each Benjamin Brett, Blake Daniels, and Robert Fry consider abstraction as an organic and gestural process – proving that perhaps painting – one of the most conventional of disciplines – ultimately triumphs as perhaps the most experimental, exhilarating, and enduring of all media.

Upon first instance the works might each appear to be departures from a school of figuration, however, while this may provide a type of initial segue between the artists, one notices the deepest correlation (or even more markedly, the strongest difference,) lies in each artist’s relationship to space: precisely, how paint maps the confines of an understanding of space as transcribed within the two-dimensionality of the canvas. Here, the concept of abstraction involves complexities deeper than geometry or merely disjointed figuration. More telling still is how any narrative that seems to unfold within the work is verified and negated in equal measure through its own very presence; these are painterly constructions operating like an Ouroboros – a symbol from Ancient Egypt of a snake which consumes its own tail, suggesting a self-fulfilling prophecy, one which Jungian psychology later appropriated to suggest the realm of possibility of the human psyche. Somehow, this carnal, metaphorical beast seems strangely appropriate as a metaphor for the psychological realms mapped here. ? ?

Perhaps the beings in Blake Daniels’ works come across as the most overtly humanoid and narrative based, yet his paintings are concerned with what is happening on a much more complex scale in which he is omniscient creator of his own diegesis. His works depict bodies and spaces that have been dislocated and fragmented through the externalization of imagined space. But is narrative of any importance here at all? Certainly any linear-narrative takes a secondary role to the relationship that occurs tangentially: their textural quality, their daring and off-kilter compositions, the abundance of oblong shapes that might suggest limbs, tongues, plants, animals, or viscera, or conversely, that may exist within the confines of the painting just because.

Similarly, Myriam Blundell writes that Robert Fry’s “enduring preoccupation is to find a visual equivalent to the metaphysical space separating the act of representation from the language of abstraction”. While the suggestion of the figure is central to Fry’s practice, it is the relationship between the being, the surrounding, and the paint itself wherein which Fry finds his locus. Here we are most drawn into his mark-making, the atypical color-choices and painterly confidence that affirm Fry’s world. The omnipresence of variations on a deep purple color (while un-gendered, is historically linked to royalty and piety) becomes Fry’s trademark of-sorts, where shadows, anatomical extensions, and dismembered body parts strangely summon thoughts of deepened psychological states, not unlike Rorschach inkblots. But something about his color choice becomes undeniably carnal – references to Bacon, Guston, Twombly, (and, in Man with Vesalius Skeleton, even Dutch anatomist Andreas Vesalius) – but the languages and landscapes emerge as undoubtedly Fry’s own creation. ??

The works that enunciate the least diegesis here may also perhaps the most narrative-driven; Benjamin Brett takes an almost playful approach to the concept of space, where a defining sense of context prevails in lieu of seemingly little subject matter. Yet we are scarce to see any regimented approaches here, apart from the occasional rhombus-motif foundation lain beneath which his painterly gesture takes shape, where whimsical gestures and references emerge as buoyant, suggestive, and barely figurative, almost Matisse-like. Yet the mind connects these painterly marks into a kind of mental connect-the-dots, where narratives inevitably emerge. But it cannot be precisely said whether Brett’s intentions are to have the viewer construct narrative, or we are simply hard-wired to consider symbols in this semiological manner?

All three artists have created a subtle tapestry for our consideration, wherein confident but marginally-obscure colour choices and sublimated, subtle figurative articulations trace the stream-of-consciousness markings of the maker, and palimpsestial colours beneath layers and layers of paint suggest paintings beneath paintings – a process of definition and re-definition: redefining, obscuring, marking and mapping the abstract.?

About The Artists
ROBERT FRY (b. 1980, London) has exhibited at galleries and institutions in the UK and abroad. He has had solo exhibitions at Alexia Goethe Gallery, London (2009), Atelier 2, Moscow (2009) and M and B Gallery, Los Angeles (2010). Selected group shows include, Newspeak Saatchi Gallery, London and the State Hermitage Muesuem, St Petersburg (2011), On the Horizon, Marine Contempoary, Los Angeles (2012), Man, Myth and the Machine, Erika Deak Gallery, Budapest, Hungary (2011), Deep Space, Francois Ghebaly Gallery, Los Angeles, USA (2012) and the Summer Exhibition, Royal Academy London (2011). Fry has previously been shortlisted for the John Moores Prize. Upcoming shows include a solo exhibition with Gallery Kornfeld, Berlin in September 2013. Fry’s work is included in various collections including Saatchi, Mario Testino, Museum of Modern Art Moscow and private collections throughout Europe, South Korea and USA. He frequently donates to charitable associations, including the annual MacMillan Art Auction in aid of MacMillan Cancer Support.

BLAKE DANIELS (b. 1990, United States) is a recipient of the Edward L. Ryerson Fellowship from the School of the Art Institute of Chicago, has worked and exhibited across the United States, South Africa, Jamaica, Trinidad and Tobago, Canada and the United Kingdom. His large-scale paintings map abstraction directly onto figure and space, demanding a reinterpretation of how painting functions within the conditions of the twenty first century. Recent and forthcoming exhibitions include New Work, Sullivan Gallery, Chicago, Illinois (January 2013); the Free City International Arts Festival, Chevy-in-the-Hole Gallery, Flint, Michigan (May 2013); That Ship Has Sailed, Edna Manley College of Visual and Performing Arts, Kingston, Jamaica (October 2013); amongst Daniels participation in the Rex Nettleford Arts Conference with the Edna Manley College of Visual and Performing Arts in Kingston, Jamaica and the Meeting Place: Caribbean InTransit Symposium with the University of the West Indies in St. Augustine, Trinidad and Tobago.