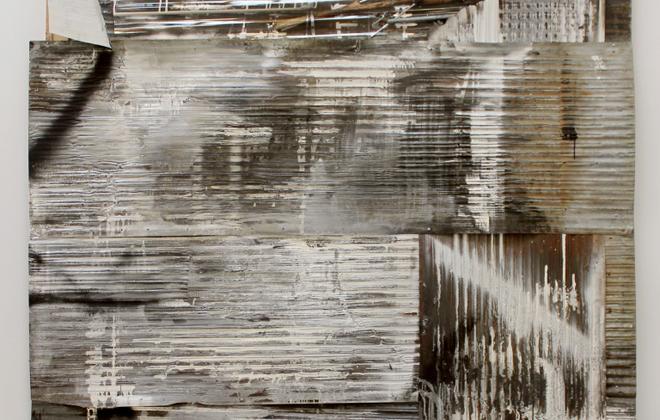 Part II consists of a group show examining in the 2.5 Dimension and a solo show from Josh Smith
Rosy Keyser, Moby Dick (2012)
This group exhibition will consist of works from the Collection that explore the expanded territory of traditional 2-dimensional painting. With works by artists from the US including Tauba Auerbach, Jessica Dickinson, Sam Falls, Alex Hubbard, Nathan Hylden, Rosy Keyser, Michael E. Smith and Ned Vena, the exhibition looks at practices that involve a supplemental dimension to painting, whether that is photography, sculpture, printmaking or time-based interactions with painting. These works strain at the boundaries of painting’s history and physicality, suggesting a metaphysics of painting, which the exhibition will explore.

Josh Smith
Josh Smith is a New York-based painter whose work explores notions of authorship, authenticity and originality. Smith frequently uses his own name as a visual trope running through his work, making it both an image and a signifier of his identity. His repetitive practice fosters an exploration of meaning and aesthetics as well as the shifting grounds that connect them. This exhibition will include works by Smith made over the past six years.