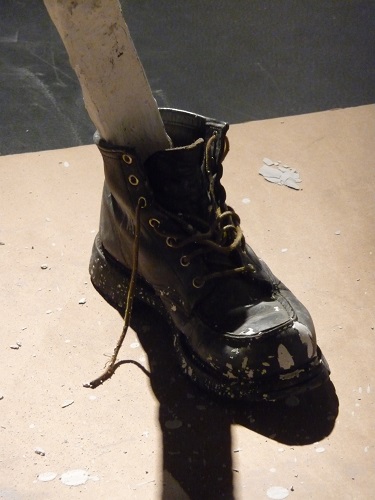 You have desires that are private, something beyond ambition more like hope or guilt. A frequency, that rises into consciousness catching you off guard. We turn, out of necessity towards refuge.
Peake plans Chorus: swell the thickening surface of as a sound piece for a cast of figures. While working in the gallery space, she is recording a number of interviews and conducting palm readings. These will be distilled and ‘spoken’ by figurative sculptures that Peake is constructing in the gallery.

Florence Peake’s practice encompasses visual art, dance and performance. Recent work has been concerned with the often hidden production processes of artworks, interacting with, re-imagining and re- framing the procedures, actions and gestures involved in both making a piece of work and packaging it.

Peake often incorporates large-scale objects and materials so that ‘dance’ becomes a means of playing with a shifting landscape of mock sculptures that change and re-form in front of the audience.
Her witty, inventively choreographed piece MAKE was performed at the Yorkshire Sculpture Park in 2012 and at the Kulturens Museum Lulea, Sweden.