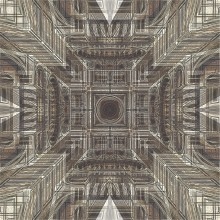 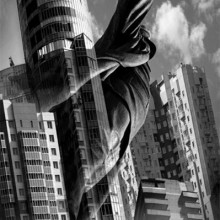 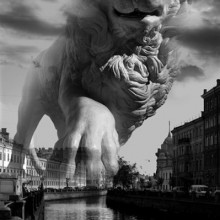 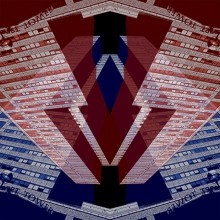 Erarta Galleries London is to present Structure by David Plaksin. A celebrated book designer and illustrator, Plaksin has a strong interest in typography and a need for meaning within his chosen imagery. Structure presents a new body of graphic work that melds his long-standing interest in graphic design with his artistic sensitivity to visual objects with strong associative potential.

Working as a book designer during the Soviet era, Plaksin was accustomed to drawing typography by hand and cutting and gluing shapes and fonts together to create graphic compositions.

The material quality of language is very much a concern for Plaksin – language for him is visual, oral, aural, cultural, and part of socio- political history. Letters can be objects just as words and concepts can be eroded beyond recognition. His overriding interest in representation, transformation, semblance, and ultimately meaning has now led him to conflate form and content. In this new body of work, letters become architecture to tell the history of a city, architecture is reduced to a lace-like lattice reminiscent of letterforms, and public spaces are haunted by a vanished age.

In his twenty piece set SANKT-PETRO-LENIN-BURG Plaksin tells the history of St. Petersburg, formerly Petrograd and Leningrad respectively before returning to its original name in 1991. The various names and evocations of the city and the social history of Russia are told. From the founding of St. Petersburg in 1703 with the Peter and Paul Fortress, through to the October Revolution and on to Constructivist and Stalinist architecture, to the first non-State funded housing projects and advertisements for banks – it is a city of many names and many histories.
If SANKT-PETRO-LENIN-BURG tells a narrative story of the city, Plaksin’s Architecture series presents the viewer with a bewildering parable.

The Communist buildings that form the base of the Architecture series are in and of themselves an outward presentation of power, stability, solidity, and constancy. But Plaksin breaks them apart, and the dismantled buildings become decorative. The lattice like framework of buildings is lifted, made transparent, rotated and overlaid, creating patterns approximating the forms of letters, but in all cases the centre is left empty, void – there is no meaning here. The architecture of a city provides the framework around which the people of that city live their lives, much like the letters in SANKT-PETRO-LENIN-BURG inform identity. However, the buildings themselves, whether Constructivist, Stalinist, or Brutalist, gain an alphabetic plainness to the people who know them, and in all cases Plaksin’s patterns have surpassed their original intentions and meaning. 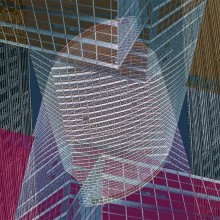