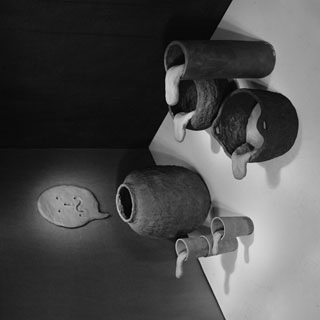 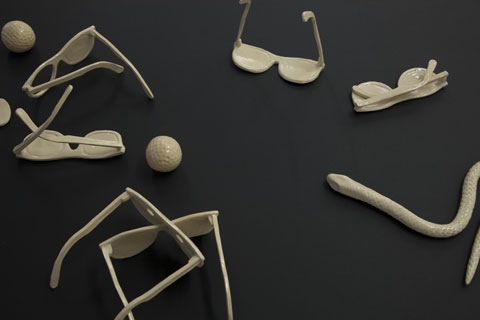 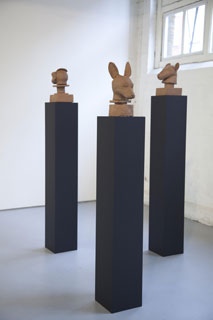 To think is not to get out of the cave; it is not to replace the uncertainty of shadows by the clear- cut outlines of things themselves, the flame’s flickering glow for the light of the true sun. To think is to enter the Labyrinth….

Figures of the Thinkable is an exploration of what has happened, what could have, and what should have, happened. Possible figures and forms are brought into being through the medium of clay and staged photographs, relaying, reminding, and echoing the movement from thought to laden physicality. The historical, conceptual, and literal weight of clay in all its changing states (elastic when wet, permanently changed when fired) shifts use from decorative to structural to functional, as well as disposed.

In the photographs the painted backdrops define the setting, the objects in the foreground are wrestling for realness with the sovereignty of the painted picture. The ceramic sculptures and reliefs in the exhibition seem to celebrate their development from possible to actual. The dried out clay pieces in the studio that never became art are also here, an exploration of failure and the remnants of making. Desiccated, discarded and crushed, shipped to London in buckets, where the artist moistens the clay and applies it in a thin layer to the wall. This spinning around opens the wall as a crack, which offers passage into the artist’s labyrinth.

About The Artist
Pfeiffer’s work is a symbiotic practice of ceramics and black & white photography. The ceramic sculptures are vessels, figurative and abstract objects. Made with different techniques and both glazed and unglazed. The ceramic objects are often echoes of utilitarian objects or replacing the action of the body with a strong connection to psychoanalytic theory as well as art history. The photographs are staged in the artist’s studio and incorporate the remains and evidence of the process of making ceramics, often against a painted backdrop that creates a fictitious depth and architectural space. Taken with a long shutter speed, they record the artist’s motion, as she moves through the frame moving light sources and objects to produce light trails and duplication.
Julia Pfeiffer lives and works in Berlin, after studying at Hochschule für Gestaltung Karlsruhe. Recent exhibitions have included NADA Miami 2012, Desaga Gallery, Cologne and Horse, Berlin. ‘Figures of the Thinkable’ is her second solo exhibition at Maria Stenfors.