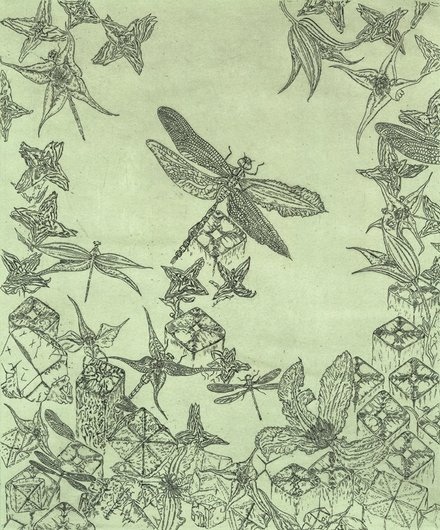 For her first solo exhibition at EB&Flow, Gemma Anderson (b. 1981, Belfast) presents a tutelage of observation – perfectly balanced between Art and Science – Anderson propagates interdisclipinarity where two seemingly polarised fields coexist within a shared framework, where for her, neither one can subsist without the other.

The term, coined by the artist, and the body of work shown in this exhibition are inspired by the mathematical and biological principle of isomorphism; the shared characteristics of ‘form’. In Anderson’s case, her experimental enquiry compares the shared forms of animal, mineral, and vegetable morphologies or compositions.

Following several years of research though observation, Gemma Anderson’s cerebral practice has led her to identify a considerable aperture in the documentation of inter-kingdom-resemblance. Specimens from zoological, mineralogical and botanical collections (at The Natural History Museum and University College London) provide Anderson with the evidence she believes points to correlations in the make-up of each ‘natural subdivision’. By setting up her own coded language or classification, Isomorphology sustains a path parallel to science, whilst simultaneously belonging to the domain of contemporary art. Anderson tabulates through the visual, the very topographies which scientific classification appears to have overlooked – the result is a body of animal-come-mineral-come-vegetable cognitive studies.

Hand coloured etchings depict seemingly fantastical (although observed) landscapes, ridden with quasi-familiar forms that appear repeated throughout, albeit with slight nuances. Whether microscopic or ‘life size’, Anderson’s motifs offer new ways of looking at the organisms with which we tread life. Black and white dark room photos are combined with intervened photograms: amalgamations of photo-collage and electroscope slides. Whilst eerily unfamiliar mathematical sculptures, rely on purpose built computer design software (Anderson and mathematician Coates developed in collaboration, Imperial College Mathematics Department), in order to realise actual form through prior equation.