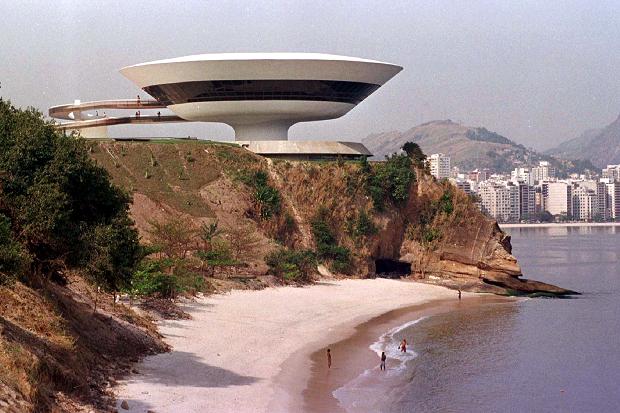 Brazilian architect Oscar Niemeyer, who designed much of the country’s futuristic capital Brasilia, died Wednesday, his doctors said. He was 104.

A pioneer in the use of reinforced concrete to produce soaring, curvaceous forms, Niemeyer has designed 600 works around the world and has some 20 other projects under way. The Brazilian icon, who won architecture’s top award, the Pritzker Prize, in 1988, started his career in the 1930s and went on working well into the 21st century, after turning 100.

Niemeyer works can be found in countries as far-flung as Algeria, Italy, Israel, the United States and Cuba, whose longtime leader Fidel Castro was one of his personal friends. In the 1940s, he worked on the headquarters in New York of the recently-created United Nations, an initiative which symbolized hopes for a new era of peace after the carnage of World War II. On that and other early projects, Niemeyer teamed up with another pioneer of post-war buildings in concrete, the French-Swiss architect Charles-Edouard Jeanneret-Gris, better known by his pseudonym of Le Corbusier.

In 1956, Niemeyer was appointed chief architect on the project to provide Brazil with a modern new capital city in the heart of the Amazon basin jungle — an achievement that was to make him one of the world’s best-known architects. One of his most spectacular works was a contemporary art museum created in 1996 — when Niemeyer was already 89 years old. Located in Niteroi, a town near Rio, it includes an upturned dish shape poised over the ocean on rocky cliffs.

Niemeyer created some 400 buildings in all, including the Serpentine Gallery in Hyde Park, London, the Penang State Mosque in Malaysia, and the headquarters of the French Communist Party in Paris. The latter building was designed during a period of exile in France, where the architect fled in the 1960s when a military dictatorship seized power in Brazil.