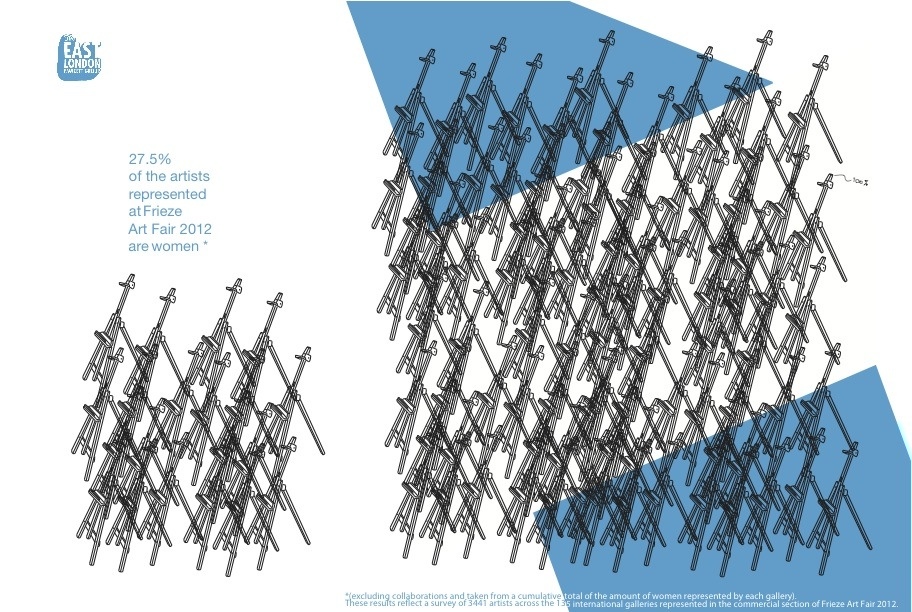 All eyes were on London during Frieze Art Fair 2012 as it showcased the best the art world has to offer, to members of the public and art collectors alike. As part of its Great East London Art Audit campaign, East London Fawcett Group (ELF) took the opportunity to audit the galleries exhibiting at this year’s Frieze as part of their wider investigation into gender inequality in the art world.

In April 2012 ELF launched the Great East London Art Audit in order to generate up to date statistics that reflect the representation of women in the arts. The campaign invites members of the public to consider the gender ratio within galleries, museums, art prizes, public projects and publications by counting the number of male and female artists being featured. Ahead of publishing the results of this year-long project, ELF conducted a special project focusing on Frieze Art Fair 2012.

The ELF audit team analysed the list of artists represented by each of the international galleries exhibiting in the commercial section of this year’s Frieze and collated the following results from the data gathered*:

27.5% of the artists represented at Frieze Art Fair 2012 are women (excluding collaborations and taken from a cumulative total of the amount of women represented by each gallery)

3.7% of the galleries at Frieze 2012 represent the same number of male and female artists

6% of the galleries represent only one or no female artists

As well as auditing the galleries exhibiting at the art fair, ELF took a look at the commercial galleries across London and discovered that 23.3% of solo exhibitions hosted by these galleries during Frieze 2012 were by female artists. In 2008, Laura McLean-Ferris, Art Review’s current editor-at-large, conducted her own survey of the solo shows being presented by London’s commercial galleries during the art fair and discovered that 11.6% of these shows were by women.** Whilst these comparative statistics imply that the situation for women practicing as artists is improving, the figures from 2012 remain hugely disproportionate.

Laura McLean-Ferris commented, “It’s good to see that things are changing slowly. I do believe that things will improve over time.” She also pointed out that much of the inequality is historic, “the roots of the trouble are in another generation. It’s important that in this time, for the groups of artists that are emerging now, that we don’t allow those patterns to repeat, and don’t, by some strange default position, look to male artists to point the way forward.”

In October 2011 ELF hosted a panel discussion in order to identify problem areas for women in the arts and to think about how to tackle them in a positive fashion. The event, which brought together leading figures in the arts, revealed that often people think that equality has already been achieved in the arts due to the fact that improvements have indeed been made and that inspirational figures such as Tracey Emin, who have defied the statistics, exist in the public arena – but the truth is that women are still severely under-represented in the art world. In order to raise awareness of the inequality that persists, ELF launched the Great East London Art Audit.

The director of ELF’s Art Campaign, Gemma Rolls-Bentley says, “we decided that to convince people that there is still inequality in the arts, we need to use a combo of hard stats and personal experience. Those two things together can build a successful campaign.”

The campaign celebrates and takes inspiration from the women who have achieved success, as well as the galleries and museums that support them; the audit is complimented by a varied programme of events including gallery tours, artist-led workshops, curator talks and group discussion.

The ongoing work of the volunteer-run campaign aims to provide a body of relevant statistics that will inspire a dialogue around the specific challenges faced by women in the arts and in the hope of encouraging people to make positive change.

*. These results reflect a survey of 3441 artists across 135 galleries