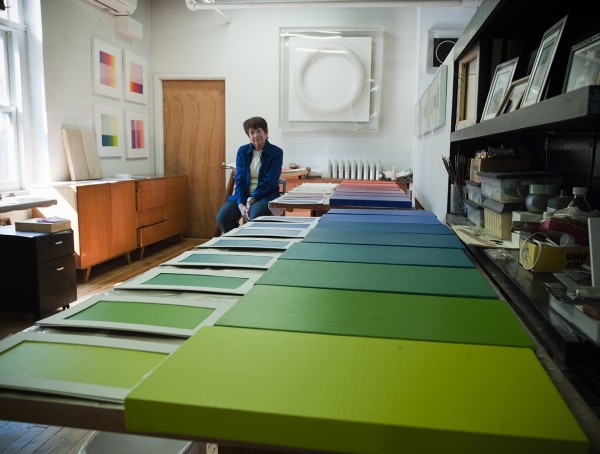 On entering the home and studio of Siri Berg I am welcomed by the artist, a petite, radiant woman. Softly spoken and elegant she stands in front of a selection of her life’s work that adorn the walls. One is immediately struck by a sense of calm order and organisation. She invites me to sit and we begin an intimate and fascinating discussion of her life and work.

Born in Sweden in 1921, Berg came to New York alone as a teenager, leaving as she describes it the “constriction” she felt in Sweden. It is clear from her smile, as she warmly reflects, how much she loves New York and the freedom it allowed her in following her artistic path. It wasn’t until her thirties that Berg became fully focused on producing Fine Art. Married twice and with two sons, it was in her home in Riverdale that she first began to paint; on a bridge table in her bedroom. As one son moved out she would claim his room as a studio and it soon became clear she would need more space. With the encouragement of her stepdaughter she started seeking a studio in New York City and the one she found is the one she remains in to this day. 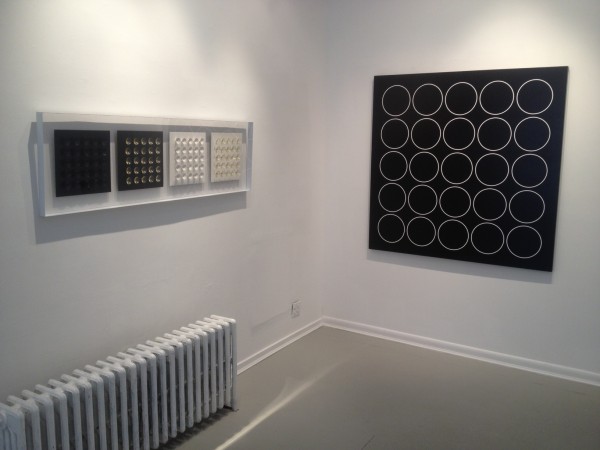 In her home and studio you can gain a serious overview of her work throughout the years. The work of Berg consists of three main bodies, assemblages (made from found objects), paintings and collages. Most are minimalist, but there are other works created in a more geometric abstraction. She speaks of her influences from the Bauhaus, mostly it would seem, in terms their “revolutionary and unconventional” approach, and adds, more pragmatically, that her influence derives from the “home furnishings not furniture or fine art, forks and knives and things like that… I was open to it – nothing stopped me.”

The show of her work that opens on the 6th September: Black and White 1976 – 1981: Redux 2012 focuses on a moment when there is a departure from her normal striking use of colour. Her choice of black and white, at this time, is perhaps not surprising in that her use of colour is typically very bold and direct including series’ of monochromatic panels. The show at Hionas Gallery, New York, NY, provides a rare opportunity to see these earlier pieces, concentrated on black and white.

In her current show which is a selection of work from her previous exhibition of 1986, at the American Swedish museum in Philadelphia, she uses circles in space, not so much to create an image that might be thought minimalist in the nihilistic sense of being stripped of emotion to the bare bones, but rather, still full of energy and deep reflection. In the original exhibit (now in her studio) her piece “Big Bang” in title and in composition is a perfect reflection of this. She speaks of the redux with excitement: “interesting,” she says, “when it’s up to see how one reacts when it has been so long ago,” poignantly, in fact, as this group of works marked her departure, at the time, from these compositions of spheres ending with the aptly titled “Big Bang.” Fascinatingly she would return to this theme 7 years later but with the injection of powerful colour very much changing the mood, which she explains by saying “the theme needed to be explored again.” In this show we can appreciate the cool, calm and collected precision of this excursion into pure black and white.