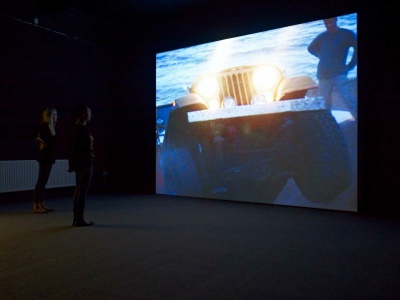 Yael Bartana, Kings of the Hill, 2003. Courtesy the artist and Annet Gelink, Amsterdam

Art and politics is at the centre of the Zabludowicz Collection’s second curatorial open.

Curators from around the globe are invited to present proposals that explore the conceptual possibilities of the collection. This year’s curators are Helga Just Christoffersen and Natasha Marie Llorens.

Christoffersen and Llorens situate ideas about space at the center of the exhibition. Here space is not something abstract, innocent and invisible. Space is a phenomenon produced by social and political conflict; the struggle for citizenship and the right to exist as a human being in the world. The 20th century witnessed the violence and de-humanisation of racial segregation and prejudice, the oppressive spatial strategies of authoritarian regimes and the formation of identities at the margins and peripheries of the social. These struggles continue as we know: and the question of agency and the right to exist in the world is not necessarily a given.

Against the backdrop of struggle and political violence there is particular urgency to the work of artists such as Yael Bartana or Avi Mograbi. Bartana and Mograbi deploy film-based media as a form of documentation that draws attention to power as an insidious phenomenon of everyday life, and as the driving force of war. Bartana’s Kings of the Hill (2003) focuses in on a leisure activity transforming it – with the gaze of the anthropologist – into something strange and open to interpretation. Israeli men force four-wheelers up red- sand coastal hills outside Tel Aviv at the weekend.

An apparently innocuous space of pleasure is transformed by the ways in which we look: I register a potent mix of grown-up play, absurdity, machismo and violence. Mograbi’s video clips are drawn from longer film-based works that document his relationship to the Palestinian-Israeli conflict. Details 2&3 (2004) deploys the visual language of documentary film and investigative journalism to make visible the violence of spatial politics in times of war. Mograbi and Israeli soldiers enter into an unsettling confrontation that makes apparent the anxiety, fear and dehumanisation that accompanies war and prejudice. The curatorial juxtaposition of Bartana and Mograbi is one of the more powerful aspects of the show.

Other works explore spatial politics in ways that blur the borderlines of truth and fiction. Performance and film-based media foreground space as architectural form and the ways in which we as viewers move and look. Miri Segal’s Still Life in Cucumber Season (2003) explores the idea of romantic love, transience and loss. I enjoyed the play on image, sound and space; and the devices of mirroring, repetition and reflection. We watch as our bodies overlay those of a couple who kiss and then perpetually part and return. The installation functions at a register that draws attention to the power of spatial environments and the seductive pull of memory, sentiment and emotion.

Live performances and talks are staged throughout the run of the exhibition. And this is a strong aspect of the project. Ethan Breckenridge stages a performance of deliberately banal characters who move around and between Breckenridge’s towering vitrines; and us the audience. We are invited to move in-between and around the actors. Each vitrine re-casts the objects and signifiers of global office culture: mass produced office furniture; and all too familiar plants. The animation of the space through performances that are live, ephemeral and open to the contingencies of time, and the imaginations of viewers, is an especially interesting curatorial decision.

The Curatorial Open is an innovative idea placing the private collection at the centre of a public sphere brought into being by an art world; and accessible in different ways to anyone. This is an art world shaped in part by the production of artists who, working across the globe, are invested in the question of what it means to make art today. 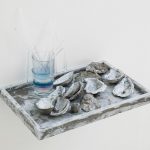 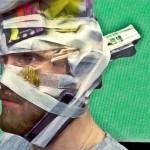 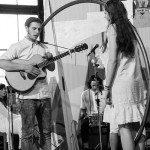