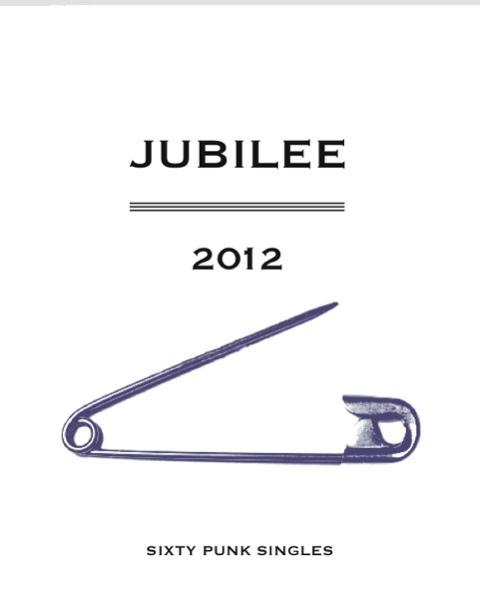 To celebrate a new exhibition, JUBILEE, 2012 – SIXTY PUNK SINGLES, The Vinyl Factory and The Mott Collection have collaborated to create a commemorative book. The limited edition of this – which is hand signed and numbered and features an exclusive dust jacket and 7″ vinyl – has now sold out, but a second edition, featuring the 124-page catalogue, is now available to pre-order.

Documenting SIXTY PUNK SINGLES from The Mott Collection and including an essay by Toby Mott, this hand-crafted book features a new cover colourway and has been risograph printed using special flouro pink, green and yellow inks.

In 1977, The Queen – the actual representation of the British state – and The Sex Pistols – the raw voice of youthful rebellion – were engaged with each other in some tortured parasitical dance of opposites, the young versus the old: the nation fractured.

Now we view Punk as much a part of Britishness as chicken tikka masala. Its underlying rage is still vocal, its target not so much The Queen as social injustice. The monarchy an anachronism as much as pints of bitter and fish ‘n’ chips in a corporate KFC world.

The Sex Pistols 1977 Silver Jubilee tribute ‘God Save The Queen’ politicised punk by targeting the emblem of the establishment. Banned by the BBC and fired by two record companies, The Pistols controversially reached the top of the pop charts. The single’s sleeve, designed by Jaime Reid, defaced Cecil Beaton’s official jubilee portrait of The Queen by sticking a safety pin through her nose.

A flood of Punk 45’s released on newly emerging independent labels covered the walls of record shops. The immediate, stark, black and white artwork grabbed music fans’ attention. Surrounded by images of defiance, kids listened intently through headphones to the new singles – only after much deliberation would one would be selected. They cost 65 pence.

Now, 35 years later, we celebrate this symbiotic relationship: The Queen representing quintessential British values and Punk exemplifying Britain’s inventive spirit. We’ve come a long way, but Punk is as relevant today as it was back then.