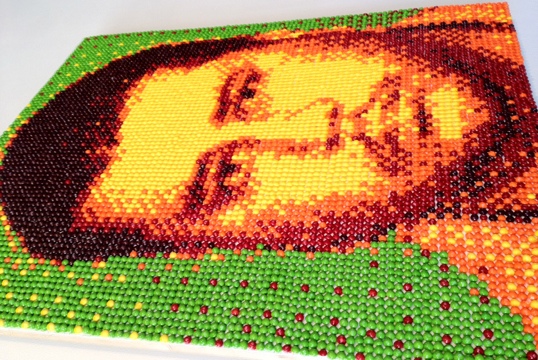 Andy Bell an artist has created a portrait of Florida shooting suspect George Zimmerman using more than 12,000 Skittles _ 17-year-old Trayvon Martin was carrying Skittles when Zimmerman fatally shot him. The 3-by-4-foot portrait was created by 31-year-old Andy Bell, an art student about to graduate from Metro State College in Denver.

Bell titled it “Fear Itself.” He tells The Denver Post (http://bit.ly/I9XQV4) he’s not judging Zimmerman but commenting on the divided opinions about the case. He says, “It’s a symbol of what happens when you let fear rule your life.” The sweets are glued to plywood and varnished. The portrait is hanging at RedLine Gallery in Denver.