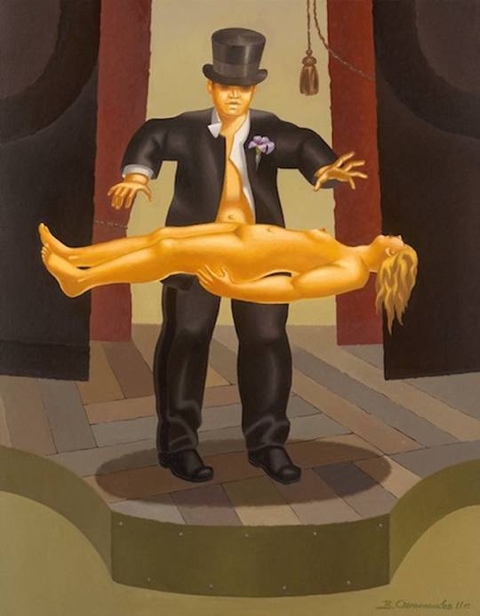 28th November 2011 – 7th January 2012
Vladimir Ovchinnikov is one of the most significant artists to emerge from St. Petersburg during the Soviet era, he is known for his paintings that blur the boundaries between realism and surrealism, fusing together contemporary Russian subject matter with magical, fantastic elements, often derived from myth and religion. His distinctively rotund, heavy-bodied, yellow-skinned figures have a primeval, statuesque quality, as if stemming from ancient monuments or religious icons – and yet at the same time his works also allude to social and political conditions, vividly satirizing contemporary mores, and puncturing the hypocrisy and spiritual bankruptcy at the heart of everyday life.

A pioneer of the nonconformist movement, in which artists rebelled against the State aesthetic of Socialist Realism, Ovchinnikov co-organized the ill-fated ‘Exhibition of the Workmen Artists’ at the Hermitage Museum in 1964 – infamously closed after just three days by the KGB, who also fired the museum’s director. In 1971, he staged a group exhibition in his own studio, which – despite being similarly repressed and having works confiscated – was key in inspiring the development of an underground, apartment-exhibition scene. Like other ‘unofficial’ artists, he continued to experience several decades of harassment and persecution by the Soviet authorities, but eventually emerged – after the reforms of the early ‘90s – as one of Russia’s most celebrated artists. In 1996 he was given a solo retrospective at The Hermitage.

In his most recent works, exhibited here, the tone is generally less scathing, more reflective and meditative. While there is still an important element of social commentary, the focus is on a more profound exploration of myth and religion. Other stories, too, serve as inspiration: images from Gulliver’s Travels, or from contemporary Russian literature. Perhaps most pertinent of all, as he enters his seventh decade, are his reflections on the artistic process itself, in the various paintings that depict the act of painting, and on the threat of encroaching loss and decay, in his powerful still-lives.