Basel art fair is now in it’s forty-second year and is clearly going from strength to strength. A few years ago, the credit crunch and the threat of global terrorism kept many collectors away from this ‘Olympic’ art fair. Galleries in turn struggled and many pieces did not find homes, or were heavily discounted to sell.

Not the case in 2011, with reports of collectors running into the fair when it opened and by some accounts even coming close to blows in order to be the first into the booths and to purchase prized pieces. That said, there were some works that were too much for even the wealthiest of buyers, such as the Warhol – ‘One Hundred and Fifty Black/White/Grey Marilyn’s’ priced at $80M offered by Bischofberger, $50M Bacon at Marlborough was likewise left unsold at the time of writing.

The leading international galleries bring to Basel only their very best pieces and most sellable artists, therefore it is no surprise to see a large Damien Hirst medicine cabinet at White Cube or sensual and simmering Kapoors at Lisson Gallery . You name a high market value artist from the last 42 years and you will be sure to find an example of their work.

Elsewhere art enthusiasts were treated to Art Unlimited, a vast hall where outsized art, installation pieces and video work is shown. Opposite is the The Swiss Art Prize, where young Swiss artists have the opportunity to show their work to an international audience.

The satellite fairs, which have become a feature of Basel in the last ten years or so, seemed to be doing brisk business. Over at Liste16 Darren Flook of Hotel informed me that he sold out his booth within the first few hours of opening. Hannah at ‘Mary, Mary’ from Glasgow was also doing well with Nick Evans sculptures.

But it isn’t all about products and items to priced and sold. At Liste there was a performance art program, situated up in the tower. We witnessed a poetic piece comprising of two men and two women, whose movements created a cause and effect with each other much like ‘The Way Things Go’ by Fischli and Weiss.

A convenient mini bus service takes one from Liste to Volta, a relative new comer fair, but with fair director’s Amanda Coulson’s energy behind it has become the alternative fair of Basel and in New York during the Armory.

The quality of the galleries is first rate and is hence a must visit for any serious collector. Debbie of Madder 139 sold out of the painter GL Brierley to a Turkish collector who wanted to take the collection of work directly onto his private jet home. Ceri Hand Gallery from Liverpool had also done well with Samantha Donnelly, of whom Anita Zabludowicz is an important collector.

Over at Scope, which for the most part features Galleries, which are commercially orientated, targeting a more domestic market rather than institutions and public collections. Here, we find a series of first rate Gavin Turk and Damien Hirst prints at Paul Stopler gallery, good painting by Karim Hamid at Aureus Contemporary, strong photography at Waterhouse & Dodd and a lively display at Cynthia Corbett Gallery.

As the season comes to a close, everyone’s sights are now set on Frieze in London in October, Scope are returning with a fair taking place in the Truman Brewery in the East End.

Then it will be onto Miami Basel in December, where the glitz and glamour of South Beach makes this fair, much more geared up for the party art crowd. Finally Frieze is making its way to New York to rival the Armory fair next spring. Let the battle of the giant fairs begin. The question on everyone’s lips is which gallery will side with whom? The answer lies perhaps with the major power brokers, such as Larry Gagosian, Jay Joplin and Barbara Gladstone. 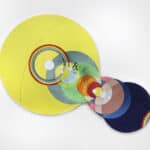 Frieze Seoul reveal over 110 galleries for first fair in Asia

Frieze today revealed initial details of the inaugural edition of Frieze Seoul, which will take place at COEX from September 2nd to 5th, 2022.