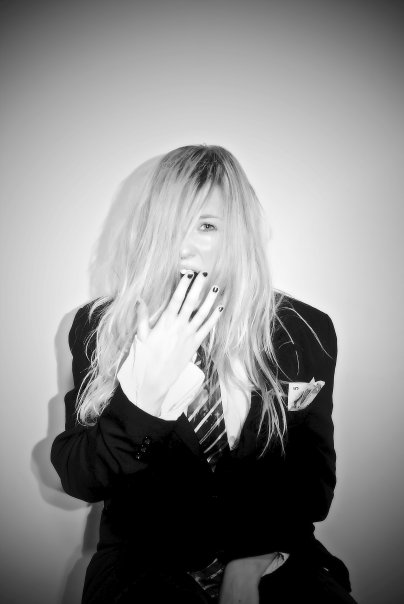 Image:MJ Delaney by Juniper Daumier
Please introduce yourself for people who may not know what you do.

My name is MJ. I’m 25 and I’m from London. I make films! Various bits and bobs of my work can be seen at hellolove.tv and unitedagents.co.uk/mj-delaney, and all of it is shamelessly promoted on my Twitter feed, @MJ_Delaney

Tell us about your current project?
I’ve just finished off two films for BBC Online. One is already online – The Biebershop Quartet. It was inspired by the blog
lesbianswholooklikejustinbieber.tumblr.com –

we took four Lesbsians and formed a Barbershop Quartet:

The other one, which is about posh kids who put on their own festivals on their parents’ country estates, will be up in a couple of weeks, it time for the festival season. Next up I’m making a film for Funny Or Die, which I’m very excited about.

In one word how would you describe your career so far?
Fun

Comedy seems to be a recurring theme throughout your work, is this something you actively seek?
I don’t think so, it’s just sort of turned out that way. That’s not to say I don’t love making comedy stuff, but I make a lot of fashion films too, which I enjoy just as much. I just like film-making. Having said that, when I made a film for The Observer to commemorate the Royal Wedding this year I had a completely open brief, and I didn’t opt to do a gritty, worthy piece of social commentary! I went Bollywood… So maybe there is an impulse in there somewhere!

What is your philosophy towards work?
I don’t think I’m old enough to have one of those yet! I’m very lucky that I have a job that I love, so I’m not even sure that I need one. My hours are completely mental – day and night, weekdays, weekends – and I work with my friends a lot, so my work is pretty much indistinguishable from the rest of my life.

Tell us something that irritates you about the industry you work in?
The financial insecurity and the constant threat/paranoia of ‘I’LL NEVER WORK AGAIN’. But on the other hand, I think that’s probably a reasonable pay-off for how much fun it is – otherwise everyone would be at it, wouldn’t they?!

What would your dream job be?
Without wanting to sound insufferably smug, I can’t think of a job I’d enjoy more than the one I’ve got.

Tell us anything you think we should know about.
1. Someone told me recently there’s the same amount of fat in one chocolate digestive as there is in a whole packet of crisps. This shocked me.

2. An amazing and beautifully designed new social networking site is about to launch, called justlefthome.com – you can follow @justlefthomey in the meantime as the final days count down to not being able to live without it.