Review: Margaret Harrison and The Girls I am a Fantasy PayneShurvell - FAD Magazine
Skip to content 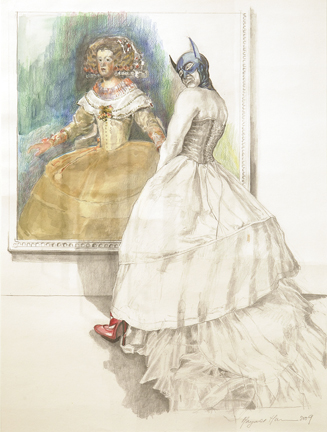 I am a Fantasy reviewed by Herbert Wright

I am a Fantasy is billed as a post-feminist show, but what exactly is Post-Feminism ? Correspondence courses for the brutish? Equality in the Royal Mail ? Can art shed any light on it ? Enter curator Beverley Knowles, once proprietor of a celebrated Notting Hill gallery that showcased a bevy of strong emerging female artists. Here, she’s deployed two big guns- legendary Margaret Harrison, whose fantasy portraits have been challenging gender-stereotype since the days of Women’s Lib, and The Girls, art stars who like dressing up and creating rich and strange tableaux. 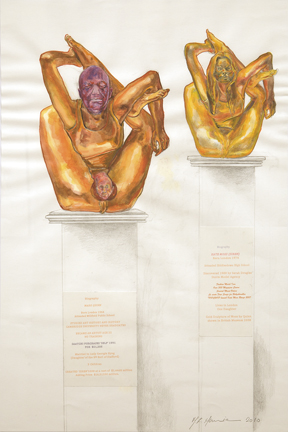 The Harrison works here span the full spread of her career so far. They go right back to a 1971 Captain America with bulging breasts, a patriotically coloured cock, stockings and high heels. It’s still startling, but back then such pictures were so shocking that the Met busted her show and the only thing that stopped the Daily Mirror running the story front page was the pound getting devalued that day.

She’s still using the same watercoloured drawing technique today, and still teasing the sexual fantasy image. In the saucily-titled What’s That Long Red Limp Wrinkly Thing You’re Pulling On, a golden dominatrix pulls on the red cape of the Captain America figure with tits, who kneels before a mirror in which a grinning buxom good-time maiden is blurrily suggested. In The Golden Phallusy, Marc Quinn’s celebrated solid gold sculpture Siren, depicting contorting Kate Moss crotch-forward, is illustrated on a plinth next to another with Quinn in the same pose with a head for his crotch. Icons of beauty in other recent works here include the likes of Dolly Parton and Velazquez’ Infanta Margarita, the latter being considered by a Batman in dress and red high-heels.

Harrison’s visual gender-shock tactics have since been exploited elsewhere (Aphex Twin’s Windowlicker bikini image springs to mind), but it’s not her only tool in questioning sexual stereotypes. The title of the show comes from Marilyn Monroe’s last words, and there are no less than seven versions on show of Harrison’s 1994 depiction of the dream goddess dead. No visual punches here- just Marilyn’s head, strangely child-like, which Harrison contemplates through subtle plays of colour and texture. This plays on the inately shocking- the world’s idea of the most beautiful woman, desexualised, drained, dead. 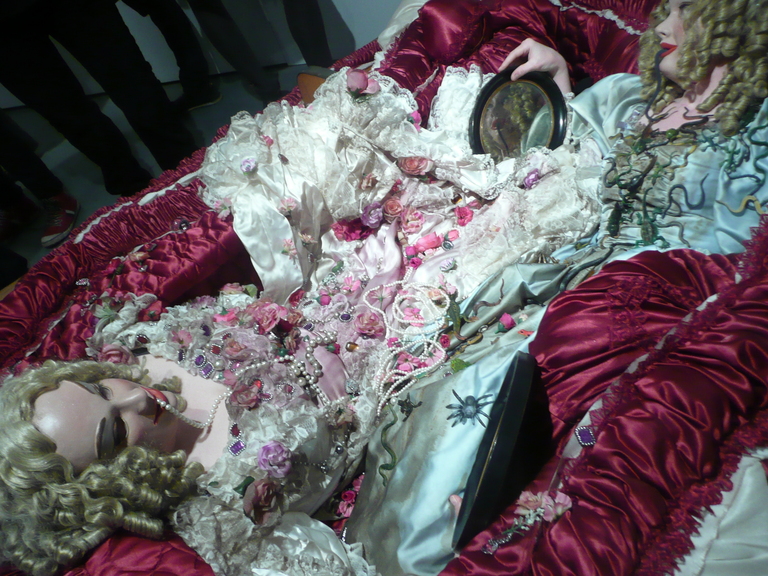 The Girls share a taste for the baroque and fancy dress with Harrison, but they offer a static theatrical performance. ‘Diamonds and Toads’ is based on the Brothers Grimm and Hans Christian Anderson fairytale princesses, one from whose mouth comes serpents, and the other, pearls. Yes, male fantasy projections of Woman. The Girls lie in an ‘armoire’ (wardrobe) laid flat and lined with gorgeous silky fabric. They are fitted out exquisitely in rich but soiled dresses, with the pearls and creepy-crawlies. They wear masks with the same red-lipped plastic anonymity as a blow-up sex doll, and perhaps it is that which makes this piece so compelling and disturbing.

The armoire (a collaboration with Hannah Stanton) and the dresses remain hung in the gallery. The Girls’ performance will be repeated on May 5th and 21st- go tap out a smartphone diary memo now! 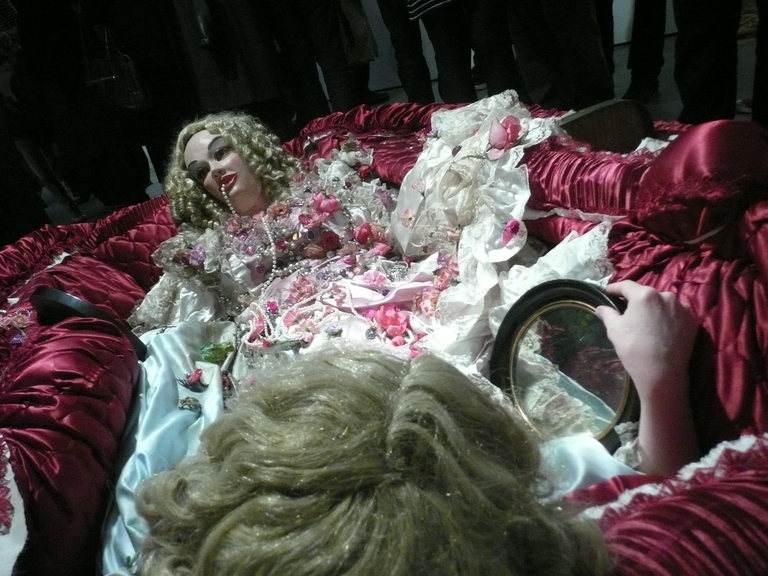 Image: Photo by Herbert Wright
What are the artists saying of post-feminism? Zoe Sinclair of The Girls talks about the feminist struggle’s relevance in 2011- she cites British schoolgirls ‘taken abroad by their families for a “holiday” that includes their genitals being butchered’. Christ yes, but does that- or for that matter domestic violence or mini-cab rape or the misogyny of conservative religion- connect to the show’s fantasy theme?

Back in bra-burning days, fairytales were one of the first subjects that feminists examined. You’ve got to get towards the root of things. Harrison was a full-on post-feminist pioneer with her stance of ‘we don’t want to be exploited, but we want to decide what to wear’. Nowadays, fantasy, costume and spectacle can become empowering tools in the hands of not male stylists but women like Lady Gaga. In I am a Fantasy, the artists do the same, but more subtly, and with cultural references that run deep into a historic continuum of male fantasy clichés. And the show delivers a punch like a pink satin boxing glove. If all that’s not Post-Feminism, what is?

PayneShurvell is to showing Wrik Mead’s ‘1975’, an hour-long animation depicting one year of the artist’s fractured life along with a series of original works on paper.

Curated by Sarah McCrory, the exhibition draws on the way artists turned to the commercial realms of comics, fashion and illustration to revitalise drawing within the visual arts – many of the works in Keep Your Timber Limber (Works on Paper) were originally produced for a commercial context.

Performance in Zenobio: Marcia Farquhar and The Girls in Venice by Beverley Knowles

‘There’s another work of Captain America. But he’s kind of altered. You can tell he has breasts, and he’s facing away and looking into the mirror’.