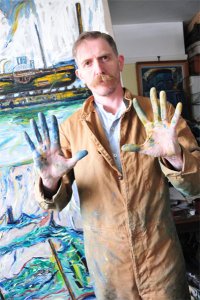 During Art 41 Basel in June 2010, the British artist Billy Childish created a lot of buzz with the presentation of his paintings at the gallery Neugerriemschneider (Berlin). It seems that with this exhibition at an art fair, the cult figure Billy Childish finally reached the attention of the mainstream art lover. From the art magazines’ coverage of the fair (Art Newspaper, Trent Fine Art Advisory, NYT T Magazine Blog, Tagesspiegel, Monopol, Die Welt etc.), we know that he “still managed to find time to take tea with Bianca Jagger who purchased one of his paintings”, and that “collectors such as Francesca von Habsburg fell prey to his works”. The press compared his “van Gogh-on-acid paintings” to works by Nolde and Munch, that he sold one “to go-painting” “after the other”, and that he “seems incompatible with his time”. And they didn’t forget to mention that he had a relationship with artist Tracey Emin and was a co-founder of the Stuckism art movement.

Just a few steps away from the fair, Billy Childish had another presentation in a space that felt like a parallel universe. Titled “Bomb Grammar”, the presentation at Betty Leirner’s “La Maison de la Poésie” focused on Billy Childish’s poetic and polemic text-based works. Curated by the artist Betty Leirner, a selection of sign-written placards, distressed posters, books and other publications by Childish’s publisher and London gallery L-13 have been on display. “These wordworks exude a raw, direct, sometimes brutal, sometimes gentle power that offers both a challenging audacity and an unusual, captivating beauty, ranging from the visionary ‘Unknowable but Certain’ placard to the confrontational and humorous ‘Love the Art Hate / Hate Box’ from last year’s ‘National Art Hate Week‘ as well as material concerning the ‘World Art Hate Day 2010?.” (Excerpt from the press release).

VernissageTV recorded a conversation between Billy Childish and Neal Brown at La Maison de la Poésie. Neal Brown is an artist and writer. He has written for most UK and many international art magazines. He curated the exhibition ‘To The Glory of God; New Religious Art’ at the 2002 Liverpool Biennial, and is author of the book Tracey Emin published by Tate Publishing. Neal Brown has written a critical study of Childish’s working practice (Billy Childish: A Short Study)