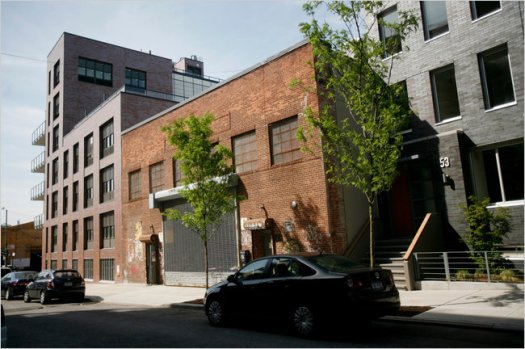 New York Times tells the story of a real estate developer trying to attract buyers by having creative artists and their studios in the neighborhood of his housing units. Douglas Steiner of Steiner Studios plans to keep choreographer Elizabeth Streb’s dance studio in the Williamsburg neighborhood of Brooklyn, hoping that it will attract sales of his $1 million-plus town homes and apartments.

Steiner constructed his development project with all the apartments tucked around Streb’s studio which he sold off to her on a no-profit, no-loss transaction. Steiner’s ingenuity has started paying off with some local families already connecting with Streb’s dance studio and a few more new buyers moving in.

Local families have connected with Ms. Streb’s studio. Jenny Williams, a painter who has lived in the neighborhood since 1992, has been sending her son, Whitman, 10, and daughter, Clementine, 8, to classes there since the studio opened. “When people ask me why I would want to raise kids in New York City, it’s one of those places that is sort of the reason,” she said.

That is what Mr. Steiner is counting on. In December, Nanette Guarda moved into a $1.125 million apartment at 80 Metropolitan with her husband, Michael Guarda, her 7-year-old daughter, Natasha, and her 6-month-old daughter, Gemma. Ms. Guarda said Natasha already “peeks in there every time we go by.” For her family to take classes there, she said, “it’s really a matter of time.”