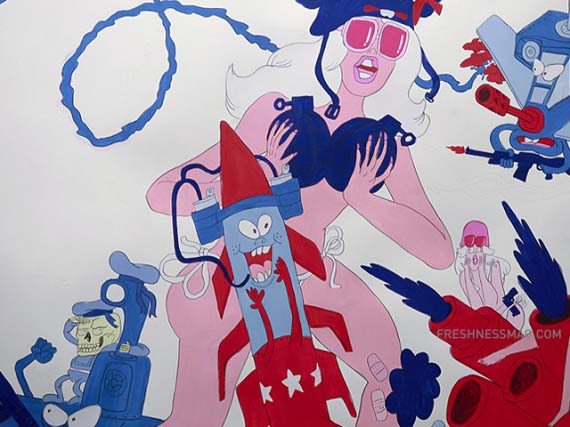 GERING & LóPEZ GALLERY is pleased to present the debut solo exhibition of New York-based artist Todd James. This will be James’ first exhibition with the gallery.

In Make My Burden Lighter, James depicts the sinful truths of American life with winsome cartoonish charm. Anthropomorphized weapons cajole in blood baths with pink-skinned blonde bombshells. Sprawling battle scenes extend ad infinitum across multiple sheets of paper. Complex, all-consuming compositions have an overwhelming sense of momentum, as if they were inevitable and unstoppable. These celebratory scenes of massive global chaos are sharply ironic yet playfully whimsical, obscuring our collective moral sense of the sanctity of life and death while pushing the boundaries of the viewer’s ability to judge what is desirable or taboo. 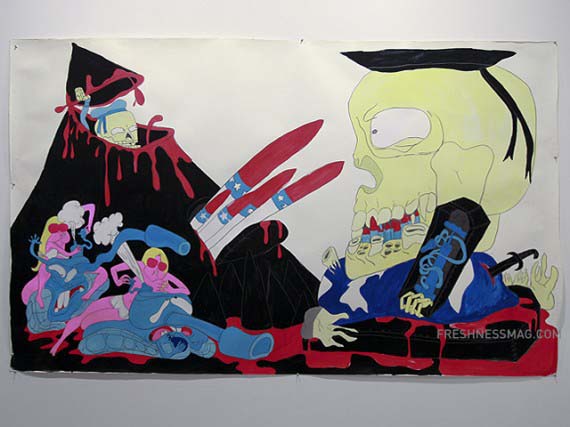 These seemingly innocent stream-of-consciousness doodles may appear as overtly political protest pieces upon closer examination. However, James does not seek to be didactic with his work. He is more interested in visually exploring the rhetorical techniques utilized by the American government and media in their attempts at desensitizing the populace’s perception of current affairs. The American tradition of packaging, commodifying, and manipulating information is at play in these works. They thus deeply connect with the current state of our shared reality, critiquing how we as spectators are led to understand it.

Self-taught, James first made a name for himself as Reas in the 1980s underground graffiti culture of New York. He went on to design the logos for The Source as well as Mobb Deep, Redman, and the Beastie Boys. In 2000, he collaborated with Steve Powers and Barry McGee on the Street Market project that was shown at Deitch Projects, New York; Parco Gallery, Japan; and the Venice Biennale. James will be restaging Street Market at Deitch Projects, New York in the summer of 2010. James was included in the traveling exhibition Beautiful Losers in 2004. Last year, he curated and participated in The New Yorkers at V1 Gallery, Copenhagen, Denmark. He has had solo exhibitions in London, UK; Copenhagen, Denmark; and Paris, France. This will be his first solo exhibition in New York. Via:[SLAMXHYPE-more images]