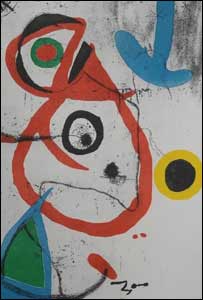 One of the fake Miro artworks (photo: Catalan police)
Michael Zabrini has pleaded guilty to conning at least 250 people out of a total of $1m (£626,000) through the sale of counterfeit art prints on the internet.

Michael Zabrin, 57, from Chicago, admitted paying up to $1,500 (£940) for the fake prints and selling them on. Hundreds of people around the world bought the fakes, many through the internet auction site eBay.

Zabrin was among seven people charged in 2008 with trading in fake works by Picasso and other artists.
Charges against the six others are pending.

Zabrin admitted buying counterfeit limited edition fine art prints from Spain and Italy and reselling them on eBay for many times the amount he paid for them.

In his signed plea agreement with prosecutors, Zabrin said he would ask his Italian source for fake Picassos by saying: “I need some Ps.”

In 2004, Zabrin purchased eight counterfeit works purportedly by Marc Chagall for $20,000 “which he resold at no less than three times his cost,” according to the plea presented to Judge Robert Dow Jr.

Zabrin admitted conducting 280 sales of fraudulent art on eBay through his companies, Fineartmasters and ZFineartmasters.

He also admitted trading fake art works with other dealers and also pleaded guilty to one count of mail fraud.